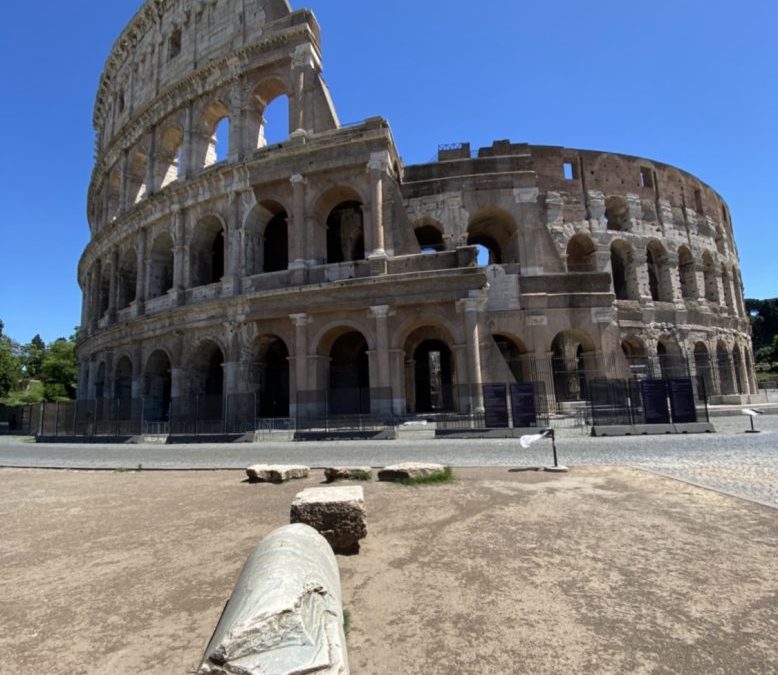 Today marks eight weeks to the day since the Italian national quarantine was declared. That was how it was described in the Italian Prime Minister’s announcement at the time. This was all very new territory, and words like lockdown weren’t yet part of our vocabulary. In fact there’s been a lot of new vocab in the last couple of months; the Before Time feels not only wearyingly long ago in temporal terms, but also lexically quite distant.

And so it came to pass that fifty-six days after the announcement that kicked this all off, a tentative move into “Phase 2” began today (the details of which were mentioned in yesterday’s post and on Day 48). As far as I’m personally concerned, the main significant change is the possibility to take exercise from home within the city (walking, running, or cycling) without restrictions on distances covered.

This morning I put on my trainers and set off on the brisk solo walk I’ve been dreaming of. The streets were mostly deserted, and keeping distance was no trouble at all. After all this time, I finally made it back inside the Aurelian Walls at the Porta Maggiore; I walked by Santa Croce in Gerusalemme – the ancient church with a late Baroque facade which is founded upon a handful of soil brought from Calvary to Rome by St Helena, mother of Constantine, who lived here (hence the epithet in Gerusalemme); I continued past the Cathedral of Rome, St John in Lateran, the mother church of all of the Catholic world; I crossed the Caelian Hill to Villa Celimontana, which I dreamed of visiting on Day 37. I walked amid its cheerfully unkempt greenery and, entirely alone apart from a couple of joggers, paused to admire the obelisk. It felt quite unreal (which rather a lot has of late, I think we can all agree), a quality only enhanced by the deepest of blue skies which lent an over-saturation to the unapologetically loud colours of May. Was I really crunching over that gravel, or was this all a dream sequence, with my blog a low-rent digital knock-off of the “little book” of Ovid’s Tristia?

I continued past the exquisite and ancient church of Saints John and Paul which, with a Fellinian bathetic flourish, is decorated with the chandeliers borrowed from the Waldorf Astoria and is opposite Berlusconi’s TV company (studios where twenty years ago I taught producers English amid the bucolic ruins). Over the funny little tram hill to the Colosseum, which loomed above a column of Carystian marble, long since quarried and brought by sea from the Aegean (oh, to be sitting down for lunch with our dear friends at Signora Sofia’s idyllic tavern after a swim off a beach with rough sand ground from marble!).

I looked over the Roman Forum, empty of people for two months and counting, probably the most deserted it has been in over two millennia. At the Trevi fountain a fireman was taking a selfie. I crossed the via del Corso, where on Day 7 the Pope made an impromptu pilgrimage to San Marcello, and said hello to the Pantheon, reassuringly immutable and immoveable through the last nineteen centuries. I walked until my legs ached, and it was wonderful. Fingers crossed it can continue.

All photos by Agnes Crawford