The School of Athens: Averroes and Pythagoras on the Pope’s wall. 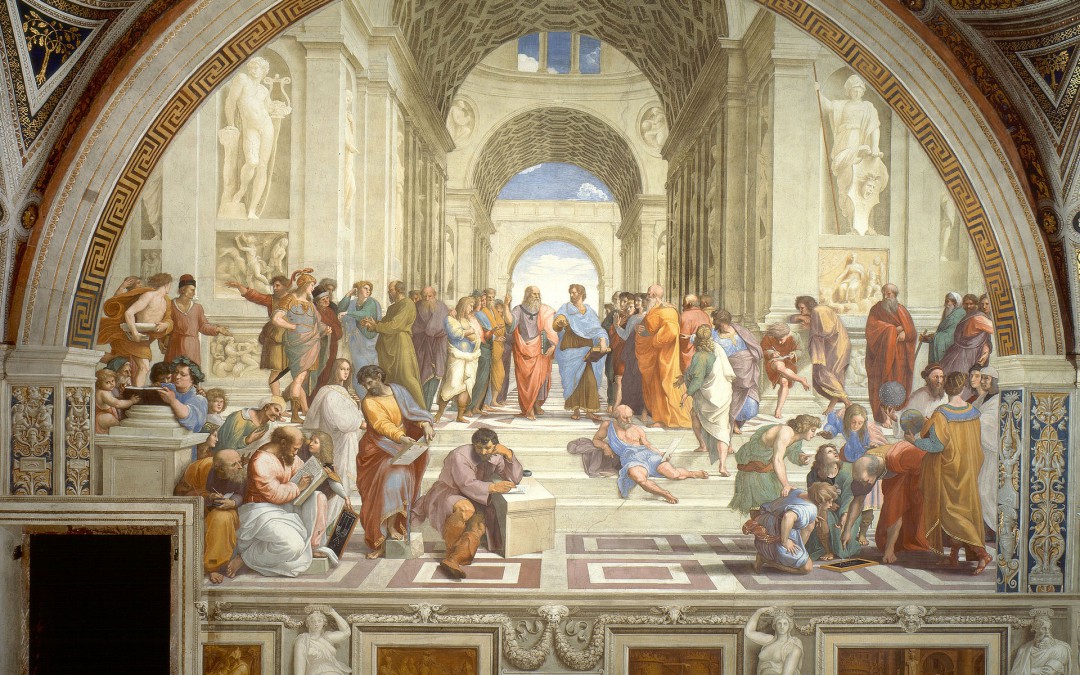 Negotiating the labyrinth of the Vatican Museums one runs the risk of running out of steam on the way to the Sistine Chapel. But do keep some energy in reserve for the Raphael rooms.

In 1508, Raphael, then 26 years old, was called in by Julius II to decorate his personal apartments. Or rather, redecorate; Raphael and company were painting over frescoes by some of the greatest artists of the Italian quattrocento. The enormous antipathy felt between Julius and his predecessor, the notorious Alexander VI of the Borgia family (who looked less like Jeremy Irons than Showtime would have us believe), was such that upon his election Julius eschewed the apartments painted by Pinturicchio for Alexander. It was said that Alexander had attempted to poison Julius when he was still a cardinal; an event which appears to have rather soured their friendship. 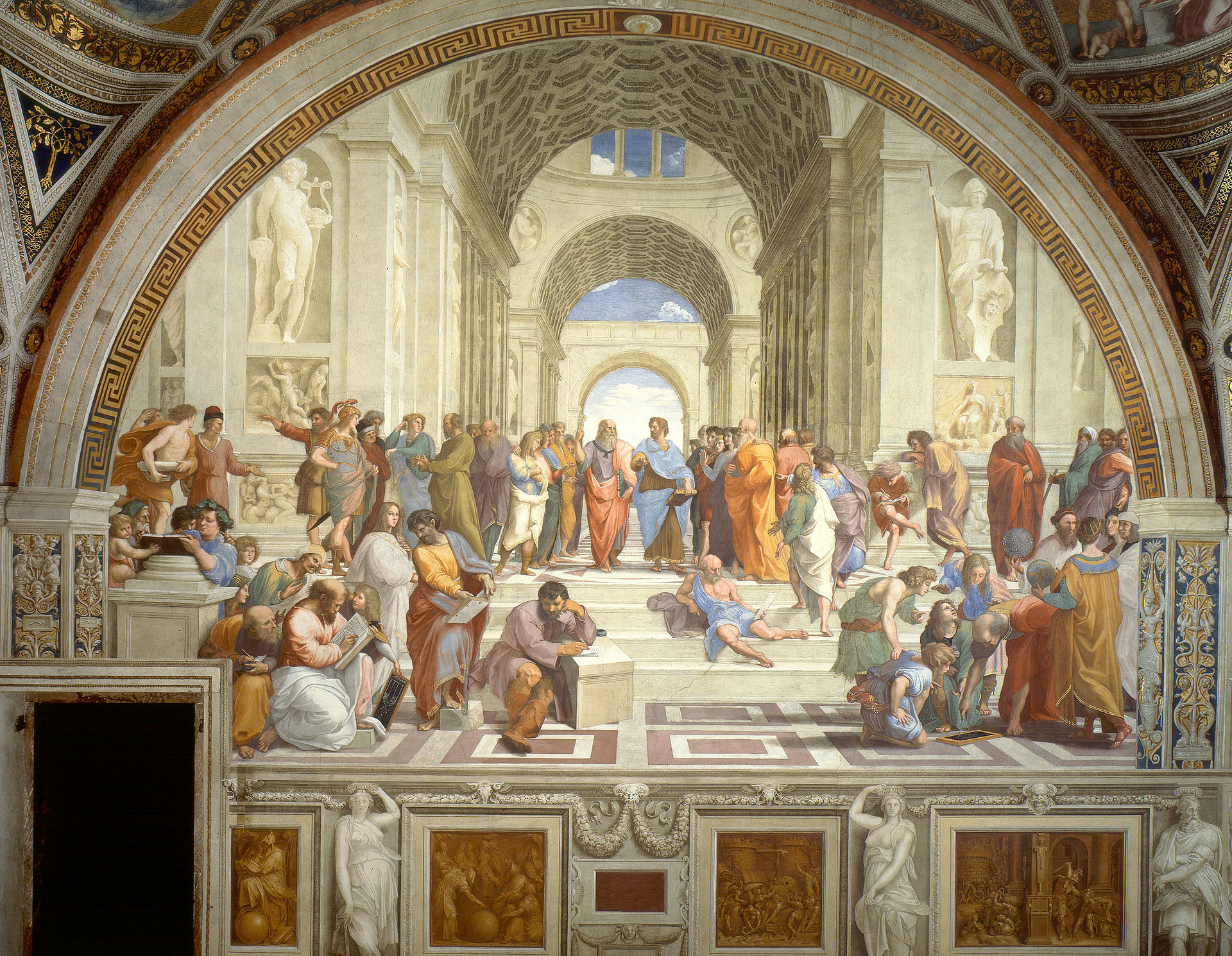 So it was that Julius chose to have the apartments of Nicholas V in the Vatican Palace repainted. The most celebrated, and deservedly so, of these rooms is the first to be painted, the Stanza della Segnatura (literally the Room of the Signature), Julius’ private study.

From his desk Julius would have looked across to the opposite wall at the painting popularly known as the “School of Athens”, or simply as “Philosophy”. Amid a curious, half-finished architectural structure is a gathering of thinkers; a fantasy league of philosophers and mathematicians in one place and in one moment, regardless of when or where they did their thinking.

In the centre, wearing pink and blue cloaks respectively, are Plato and Aristotle. Plato points heavenwards and holds his Timaeus, Aristotle indicates the solidity of the material world and holds his book of Ethics. A few figures to the left, Socrates stands in an olive green robe, recognisable by his characteristic snub nosed portrait. He counts out the points of his argument to a young man in military attire who may or may not be Alexander the Great.

It would certainly be neat if he were: for it was Socrates who taught Plato, Plato who taught Aristotle, and Aristotle who was engaged by Philip of Macedonia to teach the young Alexander. Indeed this is the overall theme of the painting which speaks of the passing on of ideas, of the transmission of knowledge. In the bottom left the bearded figure of Pythagoras in a pink robe writes in a book while a turbaned figure in a green cloak looks over his shoulder. 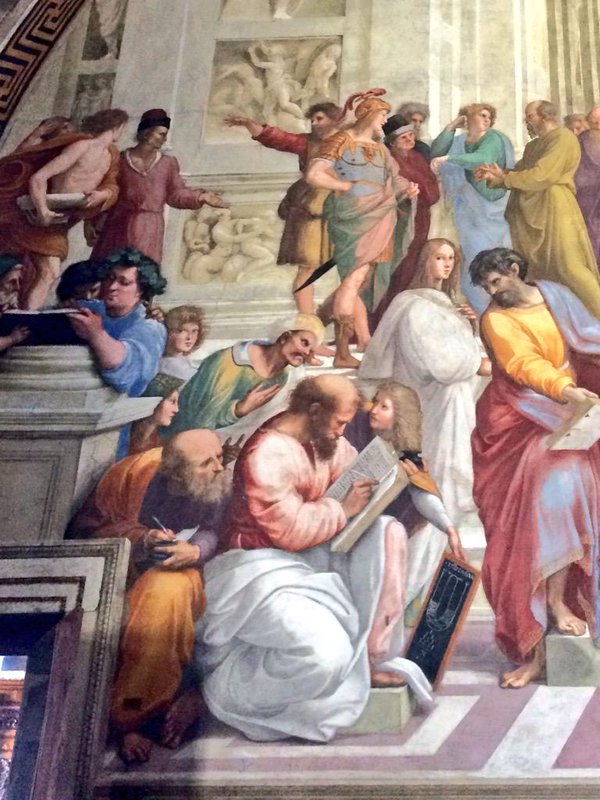 This is Averroes, a Muslim Andalusian polymath active one and half millennia after Pythagoras’ death; we can safely say they never met. Which matters not a jot. Raphael’s painting is not concerned with prosaic chronology but rather is an exaltation of the sum of human knowledge. Indeed the study of Pope Julius in the early 16th century is decorated not only with Greek philosophers from the distant and pre-Christian past, but also with the figure of an eminent Muslim. The bridge between the mathematics of the ancient world and that of the sixteenth century, we are told, passes through the Islamic world. Julius tells us that the more one knows of the universe, the better one can glory God; that mathematics and astronomy are complementary, rather than contradictory, to religious belief.

Six years after this room was finished, Martin Luther would begin the Protestant Reformation, and Rome’s divine supremacy would be called into question. Within a few decades people would be executed in the Campo de’ Fiori for claiming the Earth revolved around the Sun. The relative prosperity and stability of Julius’ reign allowed for a brief moment of enlightenment between the burning of witches and the burning of heretics. That the painting survives is down to its location in the private papal apartments; had it been in a public place it, and especially Averroes’ image, would never have survived the Inquisition. It is, like any great work of art, inescapably of its time; a keyhole through which we can peer into the mind of Pope Julius. Who I like to imagine looking on bemused, as we traipse through his private study.