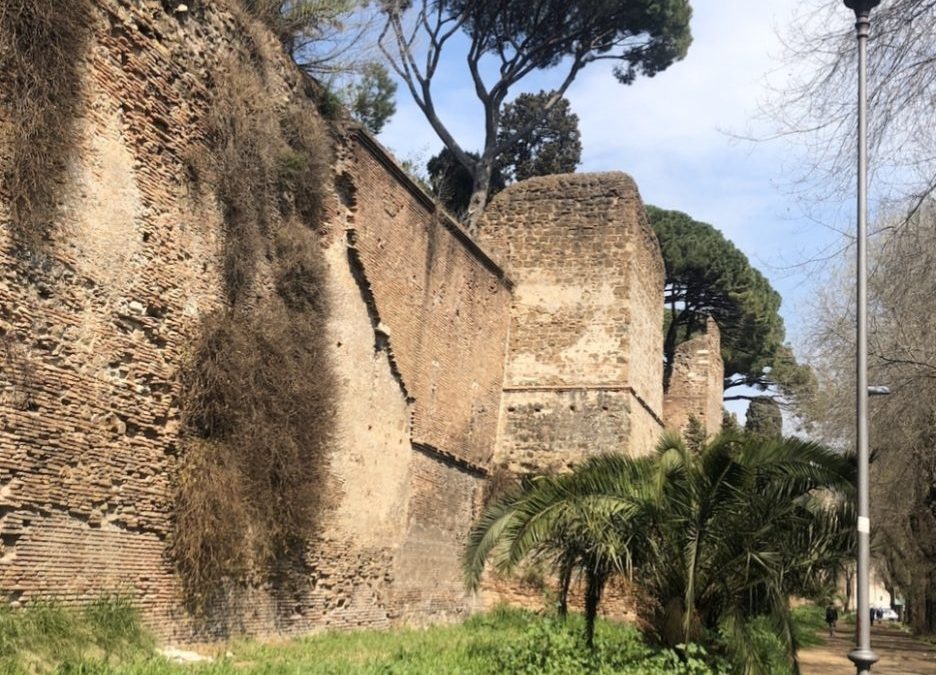 I’m very much looking forward to taking a very long walk on Monday. The slight lifting in the lockdown on 4th May means that we will be allowed to take solo exercise for the first time beyond the vaguely-termed “proximity” of our homes. So my first walk will be into the centre of town, and my approach will enter the third century Aurelian Walls which served as the city’s defences for sixteen hundred years. They were last breached on the twentieth of September of 1870, when the city fell from papal control and became the capital of the newly-unified Italy. That’s quite a run. The wall is also the largest ancient monument in Rome, covering a circuit of eighteen kilometres (twelve miles), and yet somehow it attracts less attention than it should.

In her A Time in Rome – one of my favourite memoirs of a stay in Rome – Elizabeth Bowen has a theory that:

“The Aurelian Wall is played down by guidebooks, whose references to it are buried, oblique and grudging. This may be because it is one thing too many”

One thing too many. Isn’t that marvellous? One can almost hear the weariness of the guidebook writers with their word limits and templates to follow in a city which doesn’t follow templates well (a problem with which I am closely acquainted). Which neighbourhood section should the wall go in? Which time period? It belongs to them all equally; it is both constantly present and yet rarely seen by most visitors, other than perhaps swooshed through in a taxi to and from the airport.

But as Elizabeth Bowen says, once noticed, it keeps cropping up:

“Once having found the Wall I could not forget it, or be unaware of its continuity. Its reemergences into view, out of covering buildings, never are not dramatic: whether in view or not it is there, and shapes one’s sense of the city.”

I love the capital “W”. I think she’s right, it deserves one.

So my first foray beyond the most stringent constraints of the Roman Quarantine will be through the Aurelian Walls at the Porta Maggiore, a mere kilometre from our apartment. At the moment it might as well be on the moon. It’s a wonderful vignette of Roman-ness and in a grubby junction describes so much that is fabulous about Rome. Tram-tracks knot themselves around and through aqueducts, a grand tomb to a baker made good, and ancient fortifications; usually abominable traffic lurches past this extraordinary spectacle with the inescapable Roman insouciance that I still find so relentlessly appealing.

Literally meaning “the great gate”, the name of the Porta Maggiore is (as labels in Rome so often are) misleading. Whilst the two heftily rusticated and imposing arches of creamy travertine were put to use over two centuries after their construction as a gate in the city’s fortification, the original purpose was quite other. The travertine section was originally built as part of an aqueduct. It was built using local pale limestone instead of the (cheaper, rougher) grey/brown tuff of the rest of the structure to provide a more attractive view to those entering the city by the roads its two arches once straddled: the vie Praenestina and Labicana: an Arch of (engineering) Triumph. I can’t wait to go back through it, and to reacquaint myself with what lies beyond.