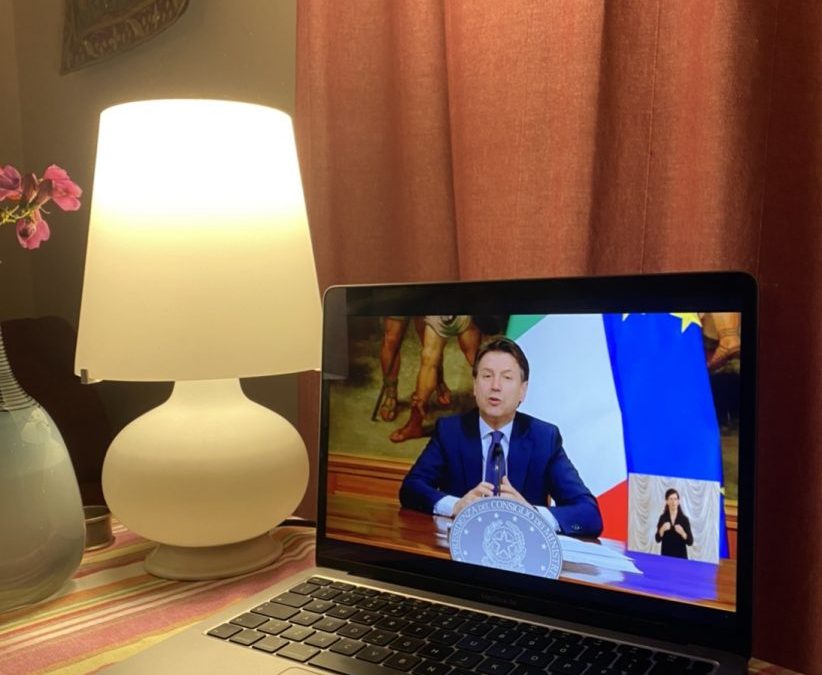 This evening (because he seems to like to speak at supper time) there was an announcement from the Italian Prime Minister, Giuseppe Conte, about how the lockdown will begin to be lifted on 4 May as we enter “Phase 2”. That’s a week on Monday, exactly eight weeks since the national quarantine began. There’s a rather timeless, gathering around the wireless, feel about these announcements. Although the wireless is now the Prime Minister’s YouTube channel. Owing to the variabilities of the ether, the words echo through open windows from computers, radios and televisions with micro-seconds of delay.

Giuseppe Conte was chosen as prime minister (he himself is not a politician, but an academic lawyer) by parties I can’t imagine voting for in any situation at all that doesn’t involve fingernail extraction. That said, he is a solid and reassuring intelligent figure who speaks well and has demonstrated good and stable leadership in the most extraordinary of circumstances. Here’s a run down of some of the points he made in the half hour broadcast, perhaps a suggestion of the slight changes that other countries may expect to see in the near future.

He began by announcing that masks will be obligatory, and that prices will be state-controlled to avoid speculation, and exempt from VAT. He spoke of governmental (and, it is hoped, European Union) investment in funding and loans for small and medium businesses, emphasising the objective of employment over handouts. There was a special mention for tourism, worth 13% of Italian GDP and clearly one of the sectors which will take the longest to return to any semblance of normality as international borders remain effectively closed for more than just the foreseeable future.

Movement between regions will only be allowed for important work and health reasons, or to return to one’s official residence address. Within regions, reunions for immediate family separated by the quarantine will be allowed but only in small numbers, masks must be worn, and social distancing rules maintained. If in the initial lockdown message on 9th March he said “we will hug those we love again”, today he made clear that hugging was still off limits.

Anyone with a temperature of 37.5c (99.5F) or more, and/or any symptoms of coughing or respiratory symptoms is to stay at home and contact his or her family doctor. While religious services are still suspended, an exception will be made for funerals which we be allowed to take place outside with masks and social distance maintained for a maximum of fifteen people. He spoke eloquently and compassionately of those who have not only lost family but also been denied funerals.

Public parks are to reopen for purposes of exercise only, with police limiting numbers where necessary. A distance of at least one metre is to be maintained while walking, two metres if running. Bars and restaurants will reopen not only for delivery (as has been the case so far in some regions), but also for takeaway. Numbers of people are to be limited, queues spaced out, and food and drink cannot be consumed in public but is to be taken home or to the workplace. Factories will also reopen on 4th May with stringent safety regulations, with preparations for these provisions to begin this week. Each region is to provide detailed and daily information on new cases, and from 7th May there will be the possibility for the government to lockdown localities where rises in case numbers are seen.

Two weeks later, much to my personal delight, on 18th May museums and archeological sites will reopen. On 1st June coffee bars, restaurants, hairdressers, and beauticians will reopen with suitable regulations to maintain safety.

The key word of the speech was caution, it was delivered with great solemnity and appreciation for the rigour with which the vast majority of the country have followed stringent rules over the last seven weeks. It feels like forever, but it seems to be doing the trick and really that’s what matters. Fingers crossed the situation continues to improve, and I can’t wait to take a really good walk a week on Monday. It’s only three kilometres away, but I’ve started to forget what the centre of the city looks like.