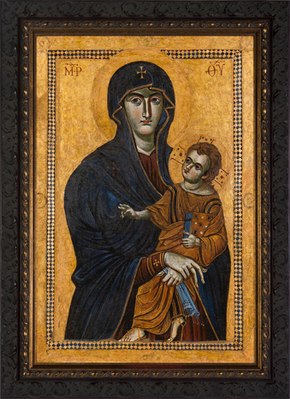 Yesterday, the day after it was announced that Easter services in the Vatican would take place without a congregation this year, the Pope left the walls of the Vatican and visited two churches to pray for an end to this pandemic. The first was Santa Maria Maggiore on the Esquiline Hill, a church founded in the fourth century by Pope Liberius following a dream and miraculous summer snowfall. The current building dates to pretty much every century from the fifth to the eighteenth centuries, and it is one of the four major basilicas in Rome–the others are St John Lateran, St Paul outside the Walls, and St Peter in the Vatican–and as such Vatican territory.

Pope Francis made his unannounced visit to the basilica to pray before the Salus Populi Romani, the most important Marian image in the city and, though theories on dating vary wildly, perhaps as early as the fifth century. It shows the Byzantine Hodegetria image of the Virgin, from the Greek “she who shows the way”, in which the Virgin indicates the Christ Child.

Tradition says that these images derive from a portrait of the Virgin and Child painted by St Luke, and that the Roman image is one of those painted by the Evangelist himself. It is is said to have arrived from Crete in the year 590, during the reign of Pope Gregory the Great who received it on the banks of the Tiber. Three years later the icon would be processed by Pope Gregory through a city ravaged by plague to seek the intercession of the Madonna. The success of this invocation was announced by a vision which appeared to Gregory of the Arcangel Michael sheathing his sword above the fortress occupying the former Mausoleum of Hadrian. It would subsequently be renamed the Castel Sant’Angelo, and the icon would become the protectress of Rome.

Since at least the thirteenth century the icon has been housed at Santa Maria Maggiore, since 1613 in the Pauline Chapel purpose-built to house it by Paul V. In the twentieth century, Pope Pius XII crowned the image during the Marian year of 1954 to thank her for saving Rome during the Second World War. Throughout his papacy, Pope Francis has prayed before it at the beginning and end of major trips. Yesterday he walked into the church and knelt before the image to invoke the Virgin once again.

After leaving the church he was driven to piazza Venezia, from where he walked up the via del Corso, the urban stretch of the ancient via Flaminia, to the church of San Marcello al Corso, another very ancient foundation (a place of worship already existed in 418 when Pope Boniface I was elected here). Here he also prayed, this time before a wooden crucifix which had miraculously survived a fire before being processed through the city for sixteen days before the plague of 1522 abated.

The official image released by the Vatican Press Office is extraordinary, and will surely feature in a film. I’d suggest Paolo Sorrentino make it. Francis is shown walking along the via del Corso, on the pavement to one side, his security detail in black behind him. An astonished passer by on a bicycle is there to witness it in an otherwise deserted city. Beyond the bombastic rhetoric of the national monument looms. It commemorates the end of papal power in Rome and the birth of modern Italy, and one of its flags is caught in full billow. In front of the monument, temporarily halted like everything else, are the interminable works of the Metro C. In front of this palimpsest, the 265th successor to Peter walks along the ancient Roman road to pray for the salvation of humanity from a new strain of virus before a miraculous crucifix. Just as Popes have since time immemorial, even since before work began on the Metro C. This too will pass.