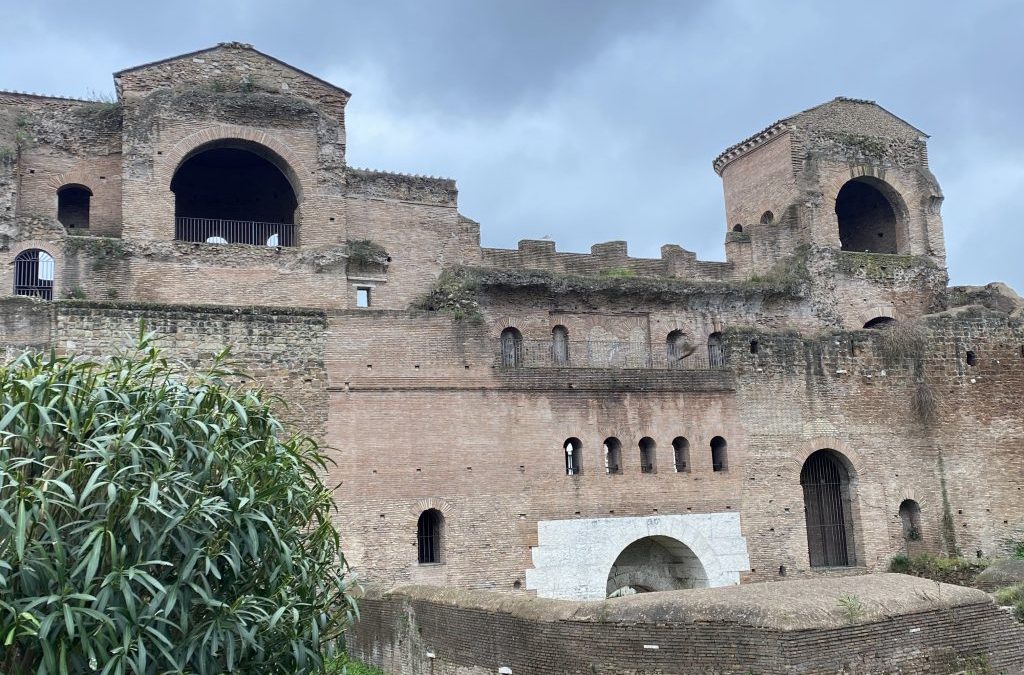 According to this week’s governmental decrees, solo open-air physical exercise is permitted as long as a minimum distance of one metre is maintained from anyone else. The quarantine situation is not going to change anytime soon–fingers crossed, but the end date of the decree of the 25th March strikes me as an optimistic and unlikely end date for this necessary, but nevertheless extremely odd, suspension of normal life–so I’m taking advantage of occasional short trips outside in case the situation changes yet again. After all, maintaining reasonable physical and psychological health is also an exercise in good citizenship, is it not?

And so it was that this morning I trotted (avoiding those streets with strung out supermarket queues as everyone carefully keeps their distance) along the deserted via La Spezia usually heaving with traffic. At the bottom of the road is Rome’s cathedral, St John in Lateran. It is currently open for parishioner’s prayers (though not for mass). As a non-believer I didn’t go in; churches are explicitly only open for private prayer, and until things are back to normal I feel that it would not be the right thing to do.

St John Lateran is an extraordinary place: the first church built in Rome with the sanction of the Emperor was built here by Constantine. The site conveniently presented itself: it had been that of the barracks of the equites singulares Augusti, a regiment then loyal to Constantine’s co-ruler, Maxentius. Following Constantine’s defeat of Maxentius at the battle of the Milvian Bridge in October of 312 CE, the battle in which tradition says Constantine was converted to Christianity by a vision, the regiment was disbanded. Whether or not Constantine’s conversion took place, the following year he legitimised Christianity, as part of a more general edict of religious freedom signed in Mediolanum, modern Milan. He then took the opportunity to use this conveniently empty piece of land just within the city walls, and over a mile from the sacred and ancient foundation of the city on the Palatine Hill, to build a church for the mysterious Eastern monotheistic religious cult spreading ever more rapidly through Roman society. Even Constantine’s mother, Helena, who lived close by, had turned her back on the Roman gods.

Initially dedicated to the Saviour, this would be Rome’s first official church, some ten years before another was begun above the believed place of St Peter’s tomb across the river in the Vatican field. This temporal primacy cemented its rôle as the cathedral church of Rome (home to the cathedra–throne–of the bishop of the city). So it was here that the newly legitimised Church began to set down its roots, where the Bishops’ palace was built, and where until the retreat of the papacy to Avignon in the early fourteenth century the Popes were resident. When the papacy definitively returned to Rome almost a century later, the new palaces were built by St Peter’s in the Vatican, and the decrepit Lateran Palace all but abandoned. In the late sixteenth century, Pope Sixtus V (nemesis of Elizabeth I of England) would demolish much of the tumble-down medieval palace, and now the great triclinium has a usually busy road running through it, only its apse, decorated with (heavily restored) ninth century mosaics and the spectacular Sancta Sanctorum (more of which at some point anon) survive to remind of the extraordinary events which took place in the banqueting hall of Rome’s rulers for a millennium.

This morning, with barely a car passing and only a couple of policemen on the far side of the square in sight, the weight of all of the people who had occupied this space was overwhelming, but also strangely comforting. For whatever reason the ones that sprang to mind were the invading Henry, King of Germany, who arrived in Rome in 1083 and took up residence in the Lateran Palace with his wife Bertha, and a priest Wibert, whom he created his pet antipope with the name Clement III. The true Pope, Gregory VII, holed up in the Castel Sant’Angelo, fuming. The following year, Henry’s plans was realised when he was crowned Holy Roman Emperor by the Pope he had created, but his plans were soon thwarted when Gregory called Robert Guiscard, the Norman Duke of Puglia, to oust the Germanic forces. The Pope was freed, but the Norman troops set about looting the city, and the area between the Lateran and the Colosseum (the route of their entry into the city) suffered especially.

Still today this horror is recalled by a road near the Colosseum called via dei Normanni, synonymous for Romans with the city’s main tax office, which is a nice touch of bathos. Anyway it turns out there’s nothing to put having to stay in a nice warm flat with a full fridge, piles of books and the entire internet at one’s disposal in perspective like an eleventh century Norman invasion.

Today’s top trotting track was Avicii, Wake Me Up. It feels a bit like that here, and as I gather more and more elsewhere too: Wake me up when it’s all over, when I’m wiser and I’m older.