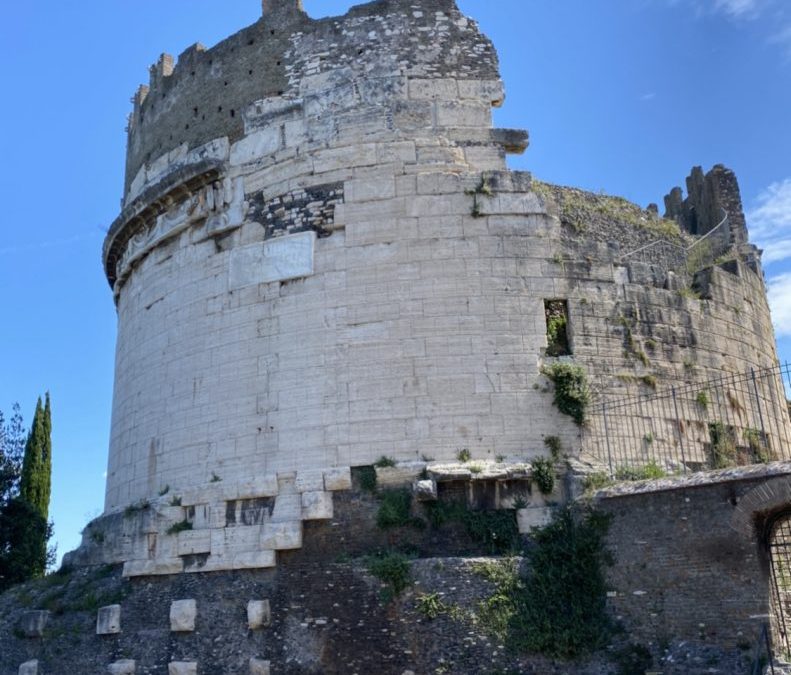 Exactly three and a half months after my last tour, in which I was the last person to leave the Forum after the Parco Archeologico del Colosseo was shut down by governmental decree, I returned to work. At least for a few days.

We were driven (masked, as per regulations) past the Circus Maximus to the tomb of Cecilia Metella.

We wandered along the Appian Way under blue blue skies (at the correct distance) past the monumental nymphaeum of the Villa of the Quintili. We admired the Aqua Claudia both on its “out of town” run, and at the Porta Maggiore.

We said hello to Eurysaces and marvelled at his splendid tomb.

Back in town, lunch was taken at the always excellent Roscioli (where the regulations concerning masks, hand sanitiser, distanced tables, QI code menus etc were obeyed to the letter).

We continued with a meander through the Jewish Ghetto, up the Capitoline Hill (where we paid homage to the protruding bit of the temple of Jupiter Optimus Maximus and admired the view over the deserted Forum).

We passed the Trevi fountain and the Temple of the Divine Hadrian, had the Pantheon (temperature check at the entrance, masks obligatory) to ourselves, and continued to the northern reaches of the Field of Mars to contemplate Augustus’ mausoleum, and concluded by the obelisk in Piazza del Popolo which once marked his tomb.

It was wonderful, and almost (almost) felt like normal. It seems astonishing that for 9 weeks I went no further than 500 metres, and that perhaps three times. Gosh, how I’ve missed my job! Fingers crossed, touch wood it’s a precursor of things to come and that we can all begin a safe (and cautious) return to travel.

In the meantime I know the vast majority of you are still in various levels of lockdown, and are missing Rome. I’m going to be continuing my Zoom talks in July, and would like to thank all of you who have joined them so far for being so enthusiastic and kind. I really enjoy them, and even if it’s virtual the atmosphere is really super.

New talks are up now for the first two weeks of July, they focus on a couple of extremely interesting neighbourhoods: the first the Jewish Ghetto, and the second Trastevere. I’ll also be reprising my talks on the Roman Forum and the Raphael Rooms. Dates, info etc here.

And one final bit of self-promotion: this week I did a talk with a very jolly bunch spread across the US for an extremely distanced birthday party with 20 people. It was great fun, we had lots of gorgeous photos, and started at 10.30pm CET which works out at 4.30pm New York time. I’m more than happy to do any time you like and create a personalised tour of any neighbourhood/artist/emperor/pope/palace/museum/site/theme you can think of! If that sounds appealing, please get in touch to discuss ideas and prices!

All the best, Agnes