Porta Maggiore: a tangle of ancient and modern 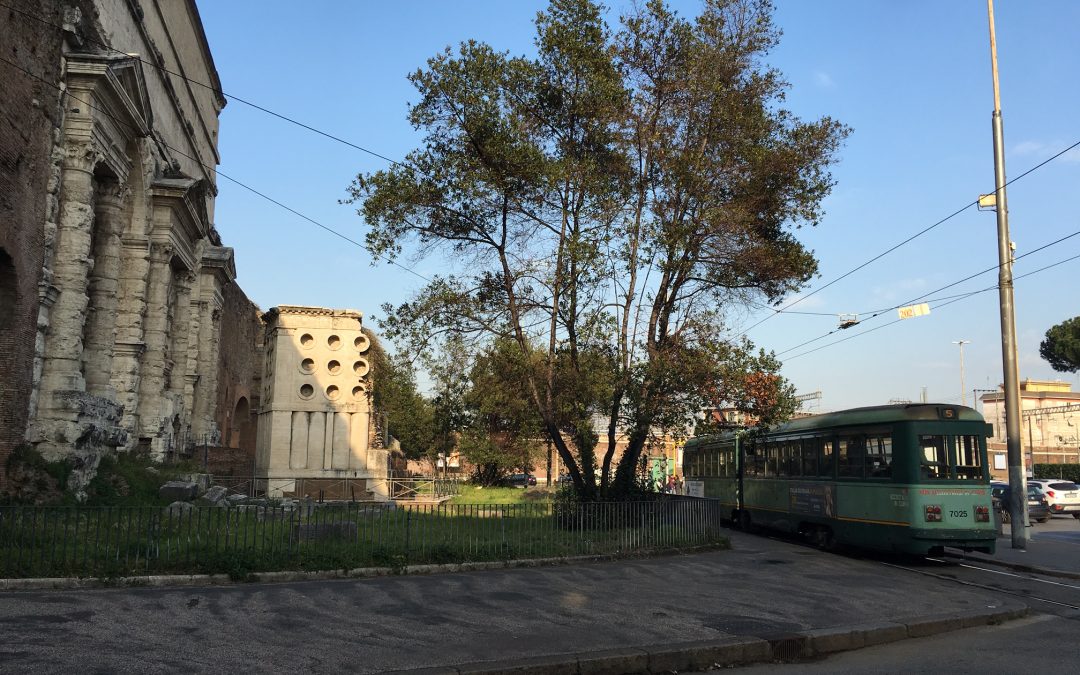 A couple of posts ago I finally got round to mentioning the largest ancient Roman monument in the city: the Aurelian Wall, which manages somehow to be simultaneously both ever present and elusive. The closest point of the Wall to my apartment is one of its most intriguing and complex points: the Porta Maggiore. Even after seventeen years in Rome this remains, to my English eyes, an improbable and exotic (and yes, grubby) tangle of ancient and modern. Tram-tracks and traffic knot themselves around and through aqueducts, a grand tomb, and ancient fortifications with the inescapable Roman insouciance that I still find so relentlessly appealing. 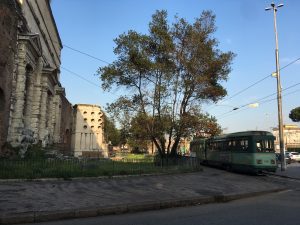 From left Porta Maggiore, the tomb of Eurysace, tram number 19.

Literally meaning “the great gate”, the name of the Porta Maggiore is (as labels in Rome so often are) misleading. Whilst the two heftily rusticated and imposing arches of creamy travertine were put to use over two centuries after their construction as a gate in the city’s fortification, the original purpose was quite other.

The travertine section was originally built as part of an aqueduct. It was built using local pale limestone instead of the (cheaper, rougher) grey/brown tuff of the rest of the structure to provide a more attractive view to those entering the city by the roads its two arches once straddled: the vie Praenestina and Labicana. At the top of this more handsome section, which we can think of as an Arch of (engineering) Triumph, the uppermost inscription is the earliest. It tells us:

Tiberius Claudius, son of Drusus, Caesar, Augustus, Germanicus, Pontifex Maximus, with Tribunician Power for the twelfth time, five times Consul, twenty-seven times Imperator, Father of his Country, saw to the construction at his own expense of the Claudian Water from the springs known as Caeruleus and Curtius forty-five miles away and the Anio Novus from sixty-two miles. [This last distance is usually considered to be an error, or perhaps an exercise in over-egging the pudding] 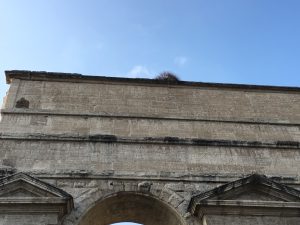 Part of the inscription. The uppermost section refers to the aqueducts’ construction, the lower sections to subsequent restorations.

It was during the rule of Rome’s first Imperial dynasty (and the mother of all dysfunctional families) the Julio – Claudians, that the city’s largest aqueduct was constructed. More precisely the aqueduct is in fact two: the Anio Novus and the Claudia. Both brought water from the Monte Simbruini, limestone hills riddled with natural springs. The very name of the mountains is redolent of water, a corruption of the Latin sub imbribus “below the rains”. Given the relative proximity of their sources, together with the vast distance the aqueducts were to cover, unifying the aqueducts along a single section of arches was an eminently practical solution. 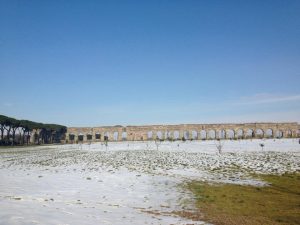 A section of the Aqua Claudia during the extraordinary snowfall of February 2012.

As the crow flies the sources are just over twenty miles from Rome, but the total length of the Aqua Claudia (as the inscription tells us) was forty-five (c. sixty kilometres). While the efficiency of Roman roads famously lay in their brevity, that of aqueducts was rooted in their elevation: the aqueducts meander their way towards the city while keeping to the high land. Over this course the average slope of the specus (the enclosed stone channel through which the water ran) was very slight (on average 1:256). 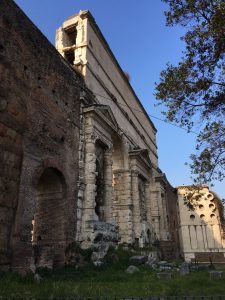 Aqueducts always began their journeys underground, but if the high land dropped away too steeply engineers needed to maintain the gradient. The arches which march across the countryside are the supports which enabled the required slope to be created. It was logical, given the proximity of the sources of the Anio Nova and the Claudia, that the two channels run along a single, vast, set of arches. This entered the city at the highest point to the east of Rome, an area known as ad Spem veterem (literally “by Old Hope”), a reference to a temple of which all trace has been long since lost, but which is mentioned by Livy in connection with the victory of Horatio over the Etruscans.

At this conveniently elevated spot it met another four aqueducts (one of which, the Anio Vetus, was underground), before they once again parted ways to ferry the lifeblood into the city, already populated by a million people when the “Porta Maggiore” was first built. That this monumental part of the aqueduct, boasting in its incription of the extraordinary achievement, should be made from the same travertine from which the sources spring has a certain pleasing geological literality.

The Porta Maggiore can be included in my Roads and Water itinerary.