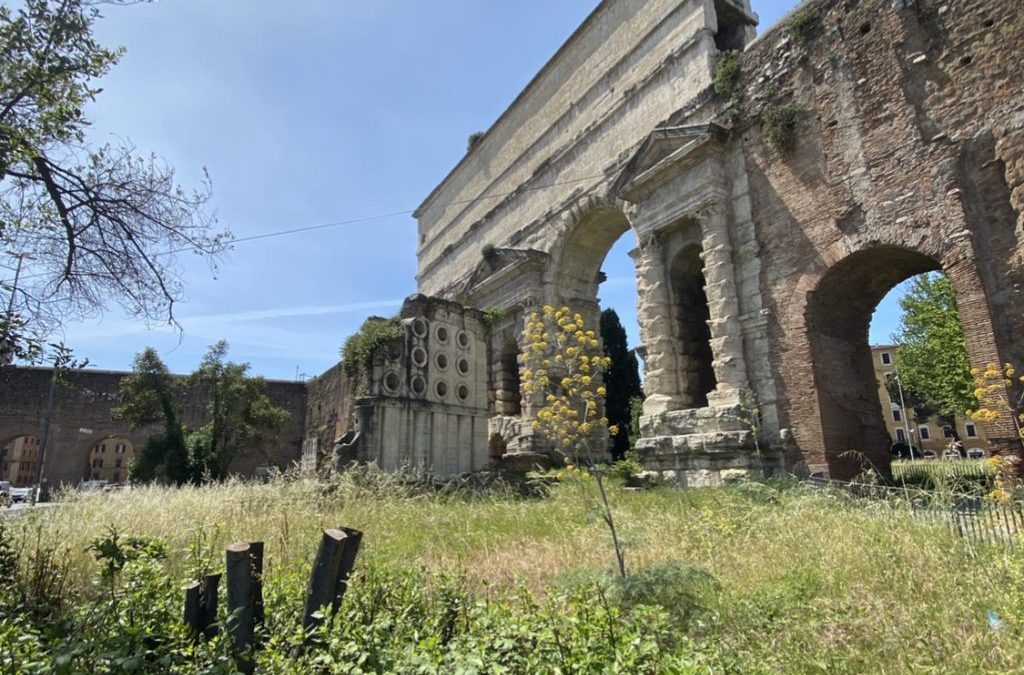 I went on another epic walk across town today.

Past the Baker’s Tomb at Porta Maggiore, over the Esquiline Hill to Santa Maria Maggiore, where I popped into say hello to the Salus Populi Romani which Pope Francis prayed before on Day 7, and took to the Vatican for the extraordinary Urbi et Orbi blessing on Day 19.

No idea what day of the week that was, but it was stormy and dramatic and dark. Forty odd days later and the skies are blue and temperatures hit 30 degrees today (86F).

After dropping into Santa Maria Maggiore, which I had to myself. I carried on toward the Trinità dei Monti, at the top of the Spanish Steps. I wandered among the nineteenth and early twentieth century busts of illustrious Italians on the Pincio, smelled the roses, and admired the view.

I walked down through Piazza del Popolo, and past the Mausoleum of Augustus.

Though the scheduled opening date of this spring has, of course, been and gone, work was underway and progress definitely being made. I’ve only ever been inside once, on the 2000th anniversary of Augustus’ death. I contemplated the Latin Fascist-era inscription which speaks of the spirits of Augustus’ soul flitting in the air around the mausoleum; a romantic and and appealing idea offering the sense of continuity, and of the genius loci (the spirit of the place), that is all-pervasive in Rome.

As I admired it with awkward reluctance, I thought what a pity it had to be Mussolini who put it there. History is extremely inconvenient.

I walked to Piazza Navona, and through a deserted Campo de’ Fiori where such market stalls as have reopened had been and gone by four o’clock. Through Piazza Farnese with its ancient bathtubs and Michelangelo-designed palace, and over the river to Trastevere to admire the mosaics in the glorious church of Santa Maria.

Chairs had been set out in place of the usual pews, each over a metre distant from the next, presumably in preparation for the scheduled recommencement of (socially distanced) Mass in Rome’s churches on 18 May. Once again the centre of town was largely deserted, but perhaps a little bit less so than on Monday. Are things slowly coming back to life?