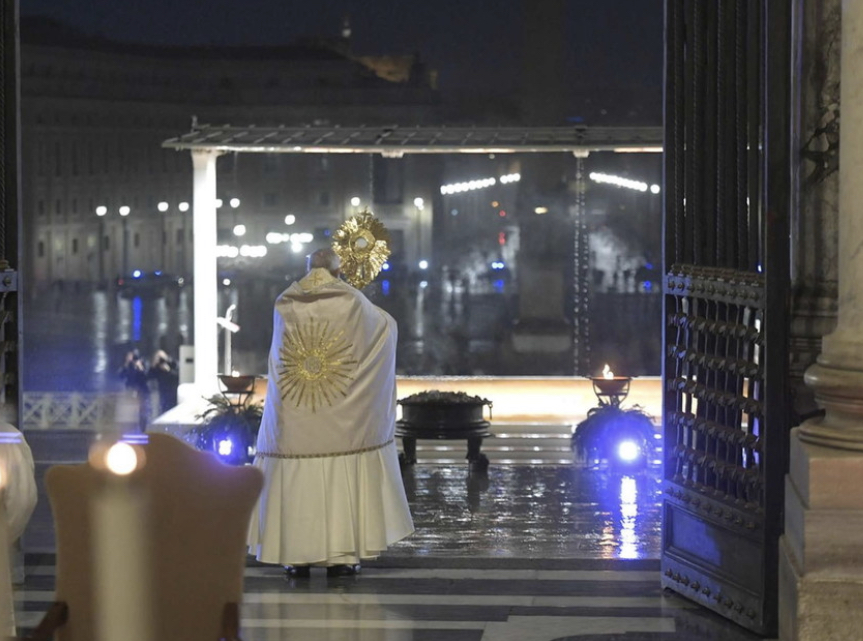 In the distant world of Day 7 of the Quarantine, I wrote of the papal pilgrimage which saw Pope Francis visit two churches with particular connections to historic banishments of plague. Yesterday evening at 6pm Rome time he once again sought to appeal to the divine.

In a deserted St Peter’s Square the Pope gave an extraordinary Benediction under persistent rain, entirely alone, the world’s largest church rising behind him. The miraculous crucifix before which he prayed two weeks ago had been brought from San Marcello al Corso, and the as the ceremony began, the sky gleamed an uncanny rich twilight blue, echoing the lights of police cars ringing the piazza. Regardless of one’s own religious beliefs, or absence thereof, it was an incredibly moving sight. The falling light, smoke rising from flaming torches through the drizzle, ancient prayer: it was all entirely out of time. The church served as a backdrop just as the temples of ancient Rome once did, and the Pontifex Maximus–a title already older than the hills and lost in the mists of time when it was held by Augustus two thousand years ago–offered prayer and blessing Urbi et Orbi, to the city and to the world.

The image of the Pope alone in that vast space was extremely poetic: it was a reminder of the timeless universality of our current situation, and of the ancient roots of Roman rites; of how a city of temples became a city of churches.