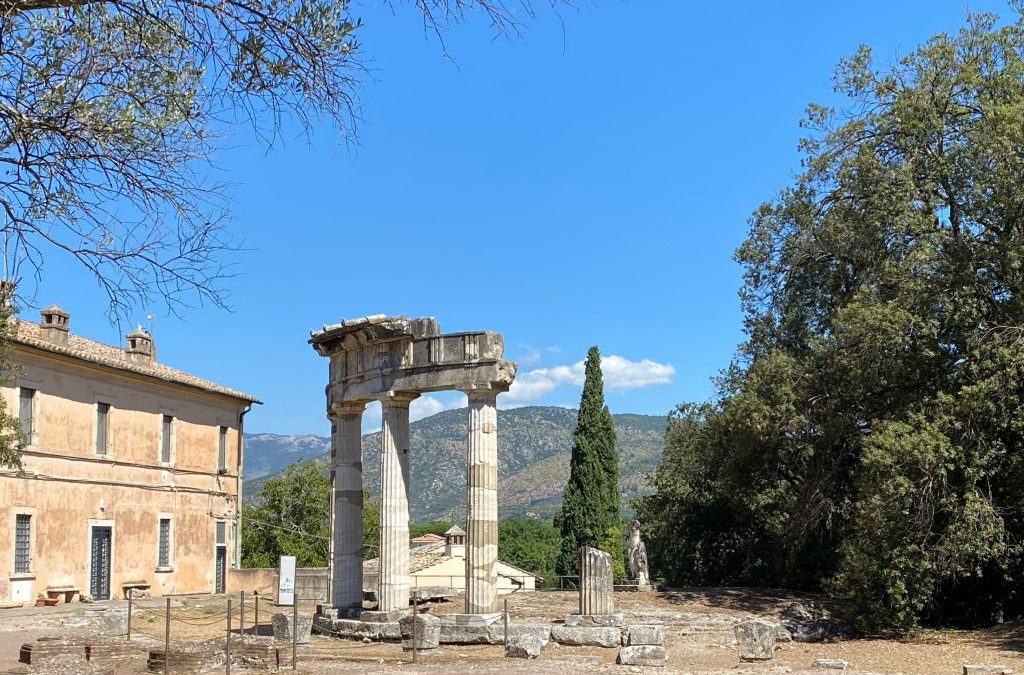 Week 26 of what, you might wonder. Will I carry on numbering my posts for all eternity? Will there be a moment in which we can say “well that’s finished now”? Monday marked twenty-six weeks since the beginning of the Italian national quarantine, the first outside China, which we now all know is a thing called “lockdown”. Six months. It feels both like an exhaustingly long time ago and the blink of an eye. Simultaneously.

Just over four months ago in a step into the unknown, I started a programme of online talks. It has been a steep learning curve which I’m extremely glad I embarked on, and if they work it is largely because of the cheerful enthusiasm of the people who follow them. Thanks, it’s much appreciated!

This week’s talk is about Hadrian’s Villa at Tivoli. It’s a fabulous, evocative, bucolic, magical site. In preparation I drove there on Sunday morning to take some photos and seek inspiration, and on Monday I dropped by the Capitoline Museums to take more photos, this time of some amazing pieces of decoration that came from the site. I also reread Marguerite Yourcenar’s glorious novel Memoirs of Hadrian, first published in 1951, which I recommend unreservedly.

At the end of my copy is an appendix of “Reflections on the Composition”, a series of notes in which Yourcenar speaks of the slow and erratic process by which she wrote the novel. One comment which particularly struck me was this:

“Do, from within, the same work of reconstruction which the nineteenth century archeologists have done from without”

The Villa was one of the sites which she visited most often during the slow and erratic process of writing the book, from the 1920s onwards. It was pretty wild.

“Yesterday, at the Villa, I thought of the thousands of lives, silent and furtive as those of wild beasts, unthinking as those of plants, who have followed here between Hadrian’s time and ours: gypsies of Piranesi’s day, pillagers of the ruins, beggars, goatherds, and peasants lodged as best they could in some corner of the rubble. At the end of an olive grove, in an ancient corridor, partly cleared, G and I came upon a shepherd’s bed of rushes, with his improvised clothes-peg stuck between two blocks of Roman cement, and the ashes of the fire not yet cold. A sense of intimacy with humble, ordinary things, a little like what one feels at the Louvre when, after closing hour, the cots of the guardians appear in among the statues”.

In a later addendum she bemoans the restorations and modifications to the site undertaken in the late 1950s:

“This new decor gives to the once melancholy Canopus something of the air of a studio set, ready for a film version of Life in Ancient Rome”.

I feel that some of that elusive elegiac melancholy –– not simply sadness but something far richer and more complex; to be savoured not shied away from –– can still be found. It is especially present on the fringes of the excavated areas of the site, where semi-wilderness abounds, and ancient oaks and gnarled olive groves can still be found even if the shepherds are long gone.

Yourcenar was very fond of a letter written by Flaubert to his friend Madame Roger des Genettes in which he states:

“The melancholy of the antique world seems to me more profound than that of the moderns, all of whom more or less imply that behind the dark void lies immortality. But for the ancients that “black hole” is infinity itself; their dreams loom and vanish against a background of immutable ebony. No crying out, no convulsions –– nothing but the fixity of a pensive gaze. Just when the gods had ceased to be and the Christ had not yet come, there was a unique moment in history, between Cicero and Marcus Aurelius, when man stood alone. Nowhere else do I find that particular grandeur.”

Ultimately, however, she grants Hadrian a sort of immortality in part through his Villa:

“Catastrophe and ruin will come; disorder will triumph, but order will too, from time to time. Peace will again establish itself between two periods and there regain the meaning which we have tried to give them. Not all our books will perish, nor our statues, if broken, lie unrepaired; other domes and pediments will rise from our domes and pediments; some few men will think and work and feel as we have done, and I venture to count upon such continuators, placed irregularly throughout the centuries, and upon this kind of intermittent immortality.”

For booking and further info about my online talks click here