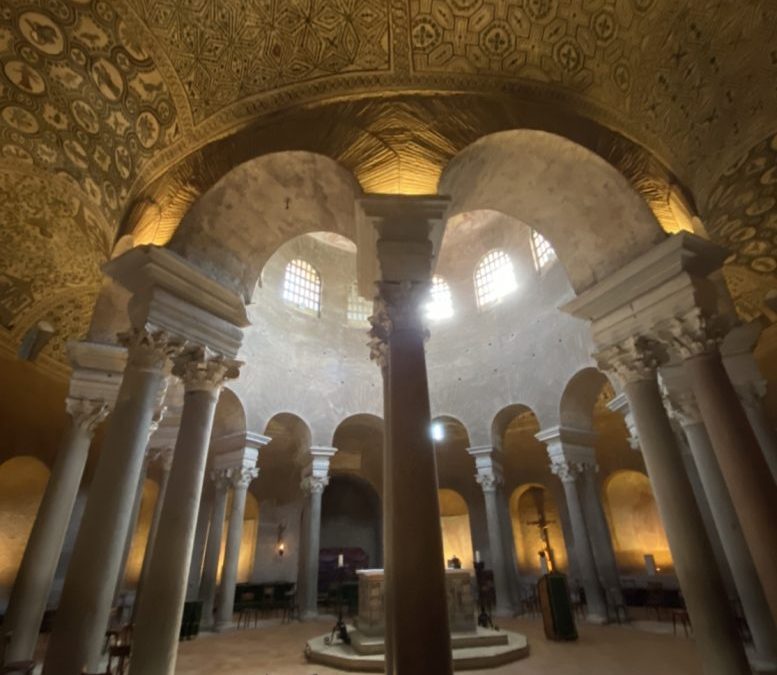 This afternoon I zipped over to the fourth century Mausoleum of Constantina (aka the church of Santa Costanza about which I wrote this) to get some better photos of the mosaics for this week’s talk: the Roman-ness of Christian Art: A Look at Medieval Church Mosaics. The mosaics glittered obligingly in the afternoon light. It was magical, and social distancing was certainly not an issue.

I also dropped into the neighbouring church dedicated to my namesake, Sant’Agnese fuori le Mura, while I was there too.

The Mausoleum of Constantina aka Santa Costanza is where last week’s talk on Constantinian Rome – last call for the final repeat tomorrow (Tuesday 2 June) at 11am CET (GMT+2), email me if you’re interested – ended, and where this week’s new topic will pick up. It is most definitely a building on the cusp.

Afterwards I scootered down to the Forum (I’m afraid nothing funny happened on the way) which reopened today. Given that a client and I were the very last people in there when it shut down on 8th March, I felt the need to close the loop. It was glorious.

The good folk of the Parco Archeologico del Colosseo have clearly been busy pruning, weeding, planting, and mowing and it all looked wonderful. There was even a slight modification to the route on the western slopes of the Palatine, which excitingly took me up a (modern) flight of stairs close to the ancient Scalae Caci between the House of Augustus and the “Romulean” huts. Even after nineteen years of giving tours in Rome there is always something new to see.

I admired the flowering acanthus, their spiky leaves an expanse of Corinthian capitals waiting to be harvested.

At the Farnese Gardens on the hill, some slightly blousy roses had hung on, but most had been and gone without anyone to see.

Some caper flowers were still out: spiky and resilient, bursting from improbable crevices and seemingly needing no nutrition; while others had already borne berries.

And the view from the Palatine over the deserted Forum was all mine. Once the busiest place humanity had ever seen has spent three months in silence, with barely a soul. A rich and melancholic sight; the only sound birds and church bells tolling in the distance, the air heavy with oleander. This must be one of the best views in the world. Gosh, how I’ve missed it!