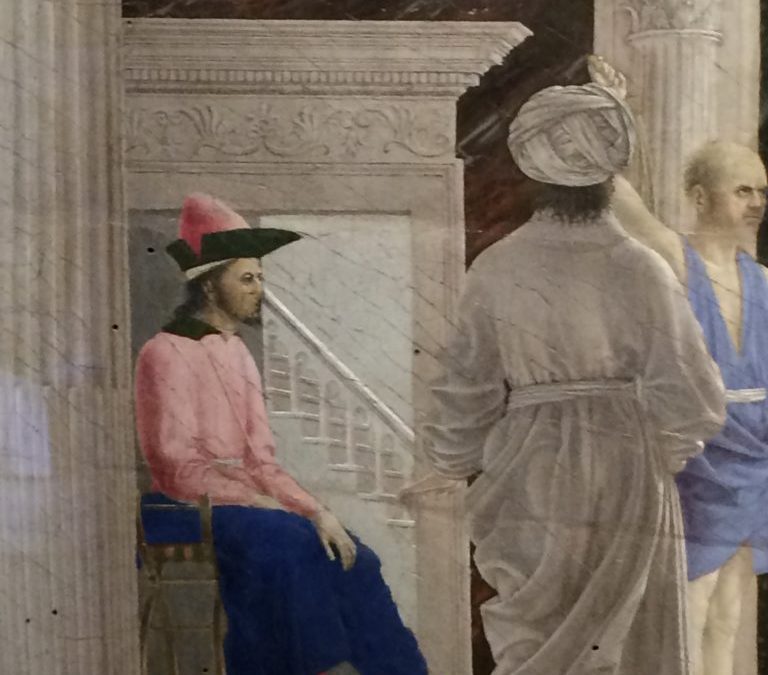 On Day 29 I mentioned my jaunt to Urbino in January. If a walk in a park feels distant, impromptu road trips feel vehemently other at the moment.

As well as the show in honour of Raphael, I visited the rest of the exquisite Ducal Palace, a place I first visited when I was twenty for the purposes of my undergraduate dissertation which was entitled, with the enthusiastic pretension of a twenty-year-old, “Piero della Francesca: Architect?” (to which the answer was of course, “yes”).

On that occasion a friend and I set off from Florence where we were spending a month (Italian classes in the mornings at the British Institute; long lunches in very good value trattorie –the sterling/lira exchange rate was extremely favourable – and churches and getting lost in the afternoons). Owing to the not insignificant scale of the mountains between Florence and Urbino, our journey was fairly circuitous. At every turn our faltering enquiries were met with the sort of perplexed expressions that suggested this to be a barmy undertaking. This was, after all, in the distant pre-smartphone fin de siècle. Nevertheless we made it, via Bologna and Pesaro, by train and bus, to the cradle of the early Renaissance, and found a pensione in our budget from the brick-sized Rough Guide to Italy (could I have possibly imagined that I would write the Rome guide then? Not really, I think I’d have been rather impressed)

This time, having retrieved my car from the tow-truck man, and inspired by my reacquaintance with Piero’s great paintings there, I decided to go and see the only of his major works I’d never seen. So I set forth to Rimini, quondam home of Renaissance despot Sigismondo Malatesta and of Federico Fellini. A splendid combination.

I had never been before because Rimini is not really on the way to anywhere else, so one has to go on purpose. If I’m honest its reputation as a slightly tawdry seaside resort with those vast Adriatic beaches that favour the dense regimentation of sun-beds which many Italians favour (in direct contrast to non-Italian ideas of Latin laissez-faire) had always put me off. But mid-January was ideal, and I can report the city centre is lovely.

I arrived, parked with significant care (I wasn’t making that mistake again), to find that I was bang in the middle of the lunchtime closing hours of the Tempio Malatesta. Just the sort of rookie error I spend my professional life avoiding. So I wandered the city centre, deserted in the middle of a grey January day. I found a café where I was the only customer and lingered over a pot of tea. I wandered a bit more. I admired, on the deserted street, the exterior of the spectacular Roman-inspired encasing of the church of San Francesco commissioned by Sigismondo – somewhat immodestly – as the Temple of his own family. Thwarted by death and taxes (and hubris, one imagines), it remains unfinished. Designed by another great hero of mine, Leon Battista Alberti – author of treatises on painting, architecture, agriculture, and able to jump onto a horse from a standing start (so he tells us) – the Renaissance polymath par excellence.

The church reopened (one is never really sure that they will, but in my experience they always do, and are splendidly and surprisingly punctual). I admired Sigismondo’s penchant for the most elegantly erudite bling, and found the celebrated (though damaged) fresco of him with his hunting dogs by Piero.

As I stood before it in awe, the custodian (the only other person there) engaged me in exactly the sort of conversation I seek to avoid when travelling. I put my awkwardness to one side and joined in, playing my part. Where was I from? Well, London, but I live in Rome. Ah, Rome, he said, as if I’d suggested Sodom, or perhaps Gomorrah. Of course it’s very beautiful, he continued (just as Dante is a great poet all know Rome to be beautiful, these are fundamental Italian truths), but the Romans don’t know how to follow rules (this is also a fact well known across Italy, whether true or not). He then embarked on a story about Sigismondo’s hunting dogs which was entertaining, possibly true, and which sadly I’ve entirely forgotten.

This combination of Roman indiscipline and fifteenth century pointers somehow segued into a long tale about his lean-to hen house for which he couldn’t get planning permission, even though it was small enough not to require it. We both agreed that this was absurd, and I went back out of one of the most exquisite buildings of the Early Renaissance into the chill drizzle of Rimini, thoughts of chickens running through my mind. I feel Fellini would have approved.