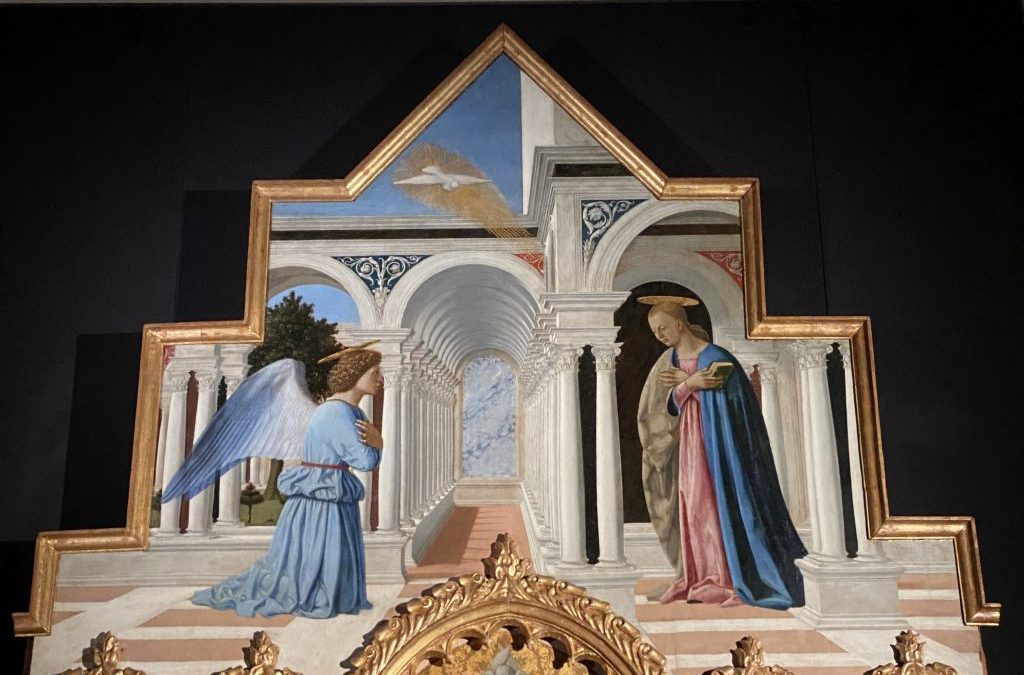 In January, on a whim, I went on a midweek jaunt. I wanted to catch an exhibition about Raphael’s circle in his home town, Urbino, before it closed and that seemed a good excuse for a road trip during the quietest period for tourism in Rome (insert hollow laugh here). I hopped in the car and drove first to Perugia, where I visited the National Gallery of Umbria, and then walked downhill to the Archeological Museum (where I was the only visitor, the lights turning on automatically as I moved from one room to the next), plus a few churches.

This was back in those distant days when being in a deserted place felt magical and triumphant, not unnerving. The museums were all mine on a January weekday, but of course the city wasn’t deserted, it was just empty of tourists: the Perugians were going about their business and it was absolutely lovely.

I continued on my way to Urbino to see the super exhibition at the Ducal Palace, surely one of the most beautiful buildings in the world. I had, presciently, left the car in an area of free parking outside the city walls. It meant a vertical downhill and then uphill trek to the hotel I’d booked on the main square, but I wouldn’t need to worry about going back to feed a meter, or risking parking fines. Happy after all of these years to have worked out the Italian parking system I went to the exhibition, had a walk through town, saw a couple of churches, and found some supper.

The next day I tramped up the vertical slope certain in the knowledge I had beaten the system. As I emerged from the city walls, a market was in full swing. Thank heavens, I thought, that I had parked right at the end. I walked through stalls selling vegetables and local cheese, but also phone chargers, functional and unappealing underwear, and knock-off trainers (because, contrary to popular opinion, Italian markets sell an awful lot of tat as well as picturesque greens). As I walked further through the wintry drizzle the market didn’t end, and I reached the place where I’d left the car. In its place was a man selling socks. I called the local police and bemoaned the absence of signs, more out of a sense of duty to play my part than in the expectation it would make any difference. They told me everyone knew today was market day, seemingly oblivious to the possibility people might come to a UNESCO World Heritage site from elsewhere, and gave me the phone number of the mechanic contracted to remove such vehicles.

From a garage in the hinterland once surveyed by Federico, Duke of Urbino “of glorious memory” (Castiglione) was despatched a woman driving a van which, no lie, I saw take the nearby roundabout at speed on two wheels. Somewhat shaken, she pulled up with a screech of bald tyres and took me to reclaim the car. I handed over a hundred euros; they agreed that the parking regulations weren’t well signposted, and were so pleasant that I really didn’t mind that much, and I went on my merry way to go and find more Pieros. It was blissful: parking fine, tow fee, and all. I’m so very glad I saw that at the time.