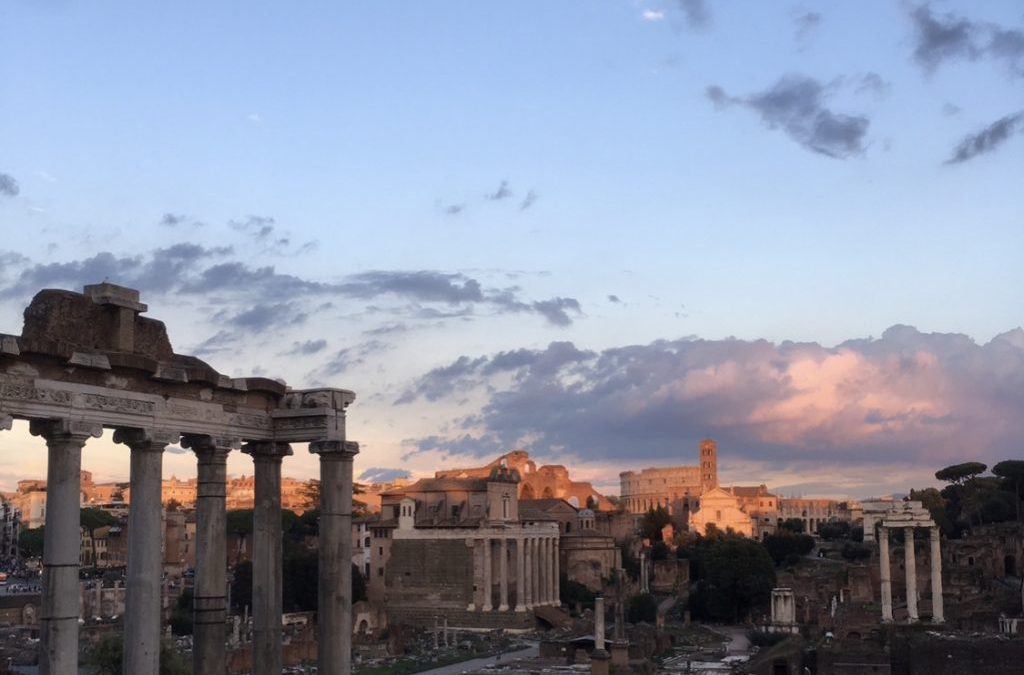 Yesterday I mentioned the Ancient & Renaissance aqueducts on via del Mandrione, the arches of which were much later transformed into dwellings. Wherever one looks in Rome one finds the jumble of a hodgepodge of centuries. Whether on the wrong side (of the wrong side) of the tracks just beyond the ancient city walls – as yesterday – or in the grandeur of the Forum, you can’t move for palimpsest.

Indeed, Rome is so interesting because it is made up of the constant layering of century upon century. This is not an original comment, it’s not called the Eternal City for nothing. The analogy often made is of lasagne; rather I think it’s more like soup: swirled together beyond the point of disassembling. This merging of history (histories?) can be a little frustrating; we tend to look for taxonomical order, labelling things helps us feel that we understand them, but sometimes one has to surrender to the higgledy-piggledy disorder in all of its eclectic glory.

My favourite reference to this palimpsest was made by Sigmund Freud in the introduction to “Civilization and its Discontents”:

“…let us make the fantastic supposition that Rome were not a human dwelling-place, but a mental entity with just as long and varied a past history: that is, in which nothing once constructed had perished, and all the earlier stages of development had survived alongside the latest. This would mean that in Rome the palaces of the Caesars were still standing on the Palatine and the Septizonium of Septimius Severus was still towering to its old height; that the beautiful statues were still standing in the colonnade of the Castle of St. Angelo, as they were up to its siege by the Goths, and so on. But more still: where the Palazzo Caffarelli stands there would also be, without this being removed, the Temple of Jupiter Capitolinus, not merely in its latest form, moreover, as the Romans of the Caesars saw it, but also in its earliest shape, when it still wore an Etruscan design and was adorned with terra-cotta antifixae. Where the Coliseum stands now, we could at the same time admire Nero’s Golden House; on the Piazza of the Pantheon we should find out only the Pantheon of today as bequeathed to us by Hadrian, but on the same site also Agrippa’s original edifice; indeed, the same ground would support the church of Santa Maria sopra Minerva and the old temple over which it was built. And the observer would need merely to shift the focus of his eyes, perhaps, or change his position, in order to call up a view of either the one or the other.”

The city, says Freud, is an analogy for memory: the Republic coexists with the Empire; Alaric, Charlemagne, and Boniface VIII rub shoulders; the return from Avignon, the echoes of the distant fall of Constantinople, the elegance of the High Renaissance, and the fearsome violence of the Sack are here loud, here whispered, but always present; the elegant architectural subversions of the Baroque, the bombast of the Vittoriano, and the surreal and stentorian tones of Fascist EUR are all of Rome.

All of those Romes exist simultaneously, each rooted in its own moment but also inextricably entwined to the others. Throughout these strands of history, Rome has seen innumerable plagues. However, this is the first in which sitting and waiting it out (in varying degrees of comfort) is a possibility for the overwhelming majority – an option still not available to much of the world’s population. So it is, that in the strange (and sad, and worrisome) period through which we are living, the streets of the Rome are perhaps more deserted than they ever have been.