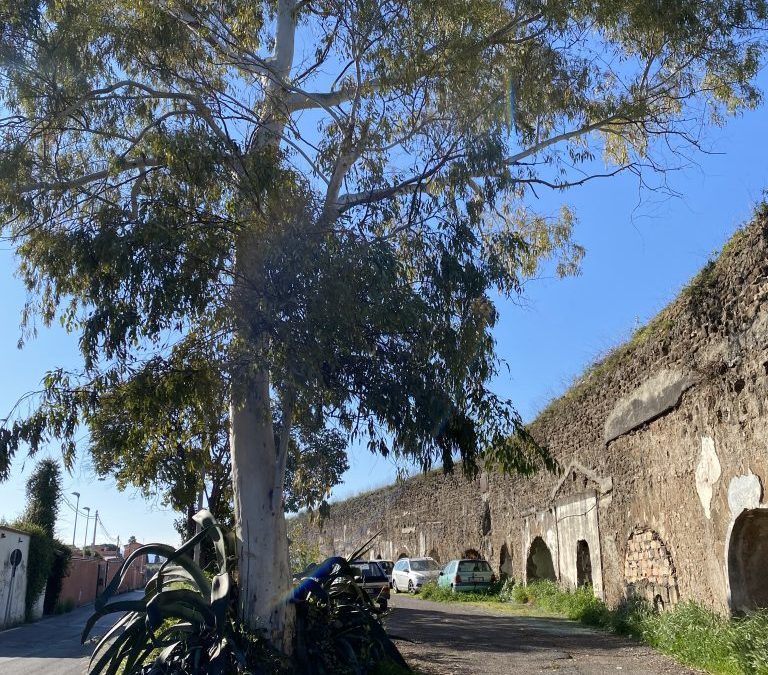 After yesterday’s fifty metre foray to the bins, I indulged my wanderlust further today with a short walk along the most deserted & interesting road in our neighbourhood, via del Mandrione. I’d set my alarm for 7.30am, something which I haven’t done in a while, because 1 April is the date which had been set for self-employed folk to apply for an emergency COVID-19 payout of €600 from the National Insurance system into which we pay for pensions and the like. After a mere forty minutes or so of clicking and waiting for pages on the clearly overstretched site to load I was able to make my application. Giddy with the sense of achievement of having archived this tedious task, I went to buy some bread, and on my way took a circuitous route along the wild aqueduct road.

It runs along a stretch of the late sixteenth century Acqua Felice, built by Sixtus V. His aqueduct, completed in 1586, in turn reused the surviving ancient channels and arches of the aque Alexandrina, Marcia, and Claudia. Pope Sixtus V was both nemesis of Elizabeth I and celebrated erector of tumbled obelisks: Egyptian sacred monoliths repurposed as signposts to pre-GPS pilgrims. He built his aqueduct for both functional and ideological purposes. It brought fresh water to the Esquiline and the Quirinal hills for the first time since the fall of Empire over a thousand years earlier, and thus demonstrated the triumphant return of Rome’s fortunes. The conspicuous consumption of the fortunate and abundant natural water supply of the city’s environs showed to all who came that Rome was back on form.

The aqueduct culminates at an extravagant mostra (literally “showing-off”) fountain featuring Moses, in what was then a newly developing area on the outskirts of town, and which is now (in normal circumstances, at least) a busy junction near the central Termini railway station, most celebrated for the church of Santa Maria della Vittoria which houses Bernini’s multi-media extravaganza depicting Santa Teresa di Avilà in the grip of an uncomfortably carnal divine visitation.

On its way into town, the aqueduct snakes through what was, until the twentieth century, countryside. As the post-Unification construction of elegant villas turned into the high density post-war building boom, via del Mandrione – running between the aqueduct and the railway – remained untouched by development, and infamous for its poverty. Until the 1970s unregulated and ad hoc slums were built against the arches and, even nearly half a century after they were torn down, traces of painted plaster and tiles still cling to the ancient masonry.

It is a road which I usually wouldn’t walk along: in normal circumstances it provides drivers in the know with a shortcut free of traffic lights, and there is no pavement. At the moment, however, there is neither traffic nor fumes. As I walked the stretch closest to our apartment, I spotted an opening I’d never noticed any of the many times I’ve ridden by on my Vespa. I walked through the arch: a palimpsest of ancient and Renaissance aqueducts, plus the vestiges of the bleakness of a twentieth-century slum. And on the other side, to my great surprise, I found an olive grove, complete with tractor.

Yesterday I yearned for rus in urbe, today I found it just around the corner from my apartment. All along it was tucked behind an ancient aqueduct amid a tangle of railway lines – on the street for which Pasolini wrote the mournful lament “Cristo al Mandrione”, so beautifully sung here by Grazia de Marchi – and I found it on a perfect spring morning, in the midst of a pandemic, in 2020. You really couldn’t make it up.