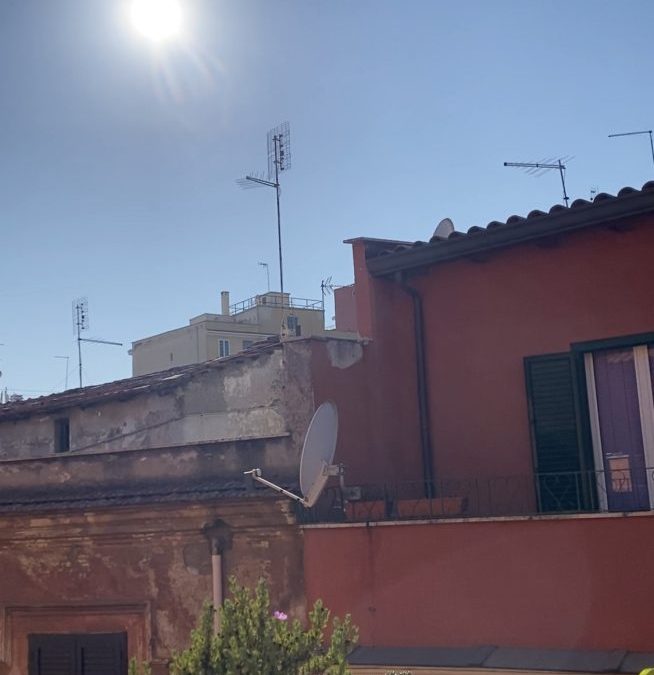 I spent today continuing to sort out our overgrown and neglected terrace. The potted lemon tree needed some heavy-duty pruning, and then I wiped down the leaves of the poor thing one by one with warm soapy water to get rid of the horrid black bug gunk they’re covered in (I did the orange treelet the other day). We’ve decided that when the terrace is once again presentable, we’ll get a stonking steak delivered from Bottega Liberati, perhaps Rome’s best butcher, and cook it on the barbecue. As I entered the pleasant sort of Zen state that mindless tasks can evoke (it took nearly three hours––absolutely no idea how––three hours wiping leaves) and enjoyed the sunshine of a glorious Roman March day (the weather doesn’t know that everything’s out of whack), Pink Floyd began blasting from a nearby terrace.

Our terrace neighbour (who had a better view) told me that a notable hardcore techno DJ of a certain vintage lived in a building the next street over and had set up his decks on the roof. He embarked on a thoroughly enjoyable set which took us from Pink Floyd through Marvin Gaye and Otis Redding to Ray Charles (plus lots of other tracks I’m not nearly cool enough to know about). I felt the sun on my back, wiped the leaves, and listened to the music booming out across the neighbourhood, and thought how infinitely preferable this was to the national anthem (I have a general aversion to all national anthems outside international sports games, ditto flags––their self-congratulatory bombast makes me cringe). The music was punctuated with sounds of approval, and the occasional shout from two men three streets away from one another who were clearly both not enjoying it––“Hai rotto er cazz’”––but even they quickly gave up as the DJ carried on regardless. It was ace, and very good for the soul.

Speaking of things which are good for the soul: this evening my pal Nick Robinson, who lives in Spain where lockdown began five days after Italy and who specialises in training programmes for businesses worldwide, organised a webinar for friends and family about psychological strategies on how to deal with being locked down. It was incredibly clear, practical, and helpful, and he’s put the recording on YouTube. As more and more of us find ourselves in a similar boat, it’s an extremely useful resource. Take a look, and a deep breath. We can manage this, we’ve just got to sit tight for a while. Coraggio, friends, coraggio.