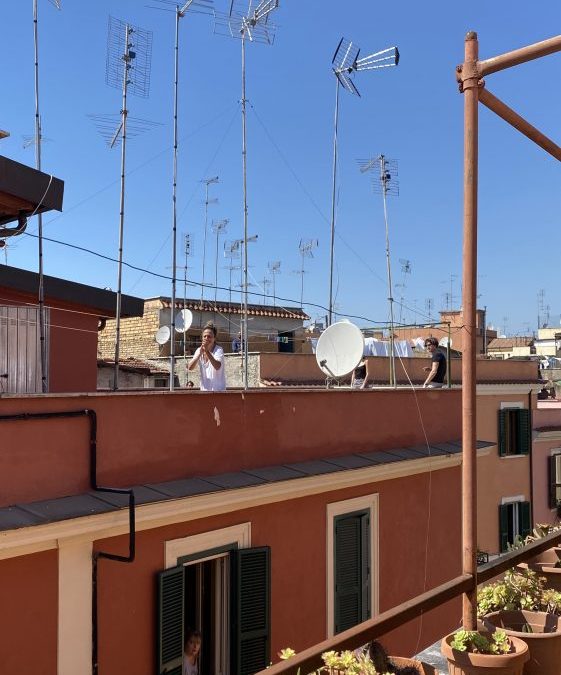 Today is the 25th April. In Italy it’s a public holiday. The Festa della Liberazione commemorates the liberation of the last Nazi-occupied cities of northern Italy, as well as the end of Fascism, which preceded the occupation. It’s generally a joyful affair, with picnics and music in parks across the city. Today those were out, but the sun shone splendidly and at three o’clock, a time established by ANPI (the National Association of Italian Partisans) and spread across social media the partisan folk song Bella, Ciao! was to be played and sung across Italy.

We gathered on our respective terraces and rooftops, and the neighbourhood DJ from Day 10 (which feels like the distant past; a hazy memory from a naïve youth) had his serious decks set up on the roof of his building.

The song reverberated across the neighbourhood and we all joined in. The song tells of a partisan asking his beloved that he be buried in the mountains in the shadow of a beautiful flower if he should die in war.

As the various versions that followed began to fizzle out, we caught a glimpse of the end of the tricolour trail left by Air Force flypast in the centre of town.

The flypast followed the President of the Republic’s ceremonial laying of a wreath at the tomb of an unknown soldier at the national monument. All alone, Sergio Mattarella climbed the steps above a deserted Piazza Venezia. It was a moving and unsettling image. Another one for the film Paolo Sorrentino surely has to make?