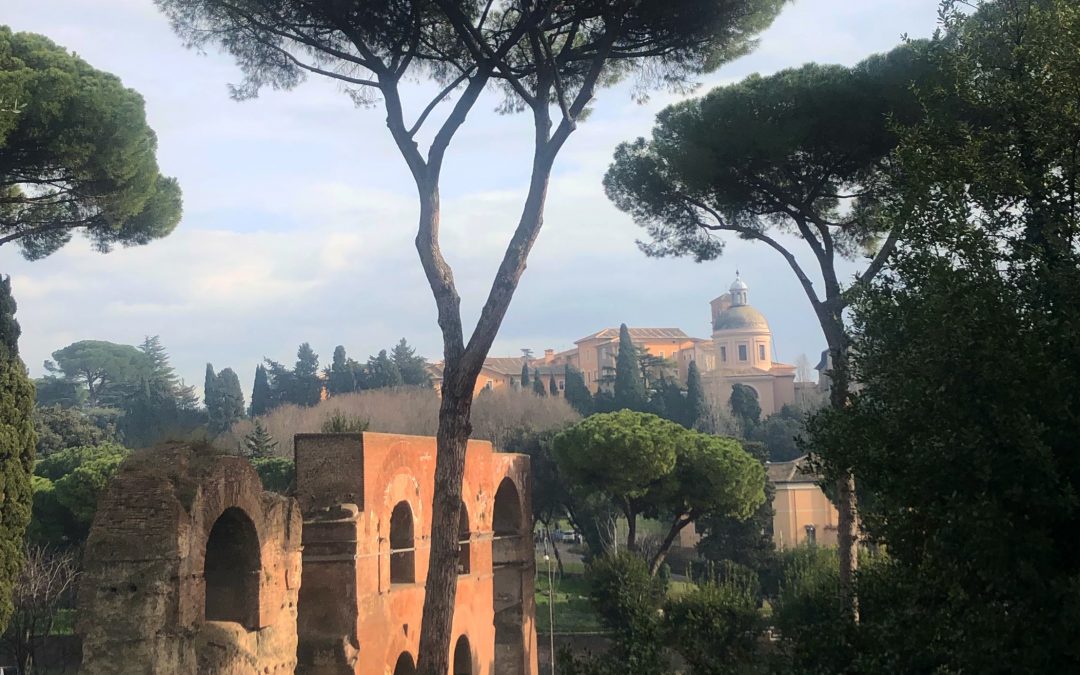 A few Wednesdays ago found me scootering over the Caelian Hill. It is winter, which in the world of the guide means a quieter period, perfect for taking stock, catching up on exhibitions, and not haring between appointments without a moment to spare. So it was that I decided to stop at Santo Stefano Rotondo, a timeless and evocative church on top of the timeless and evocative Caelian. Just a stone’s throw from the chaotic hub of hawkers and tour buses and the simply interminable metro works in the valley of the Colosseum below, much of the Celio appears much as it must have done to a medieval pilgrim. This proximity to the prosaic somehow renders its otherness even more “other”.

The Caelian Hill seen from the Palatine. Jan 2019.

The church dates to the second half of the fifth century and is a splendid example of early Christian architecture. Built during the death throes of the Roman Empire, perhaps during the reign of Pope Simplicius (468-483), the centrally-planned structure recalls both Roman mausolea (Cecilia Metella, Augustus, Hadrian, Constantina), and the martyria of the Constantian era (the church of the Holy Sepulchre at Jerusalem, the long lost Church of the Holy Apostles at Constantinople). 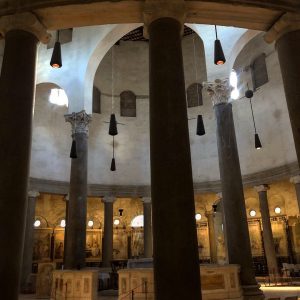 The interior of Santo Stefano Rotondo

It heralds the birth of a papal building programme, under the direct control of the Bishop of Rome and no longer entirely reliant on the financing and building of churches by wealthy congregations (a matter of decades earlier, the nearby (and vast) Basilica of Sts John and Paul had been sponsored by the senator Pammachius).

The crumbling of Imperial Rome, which no more fell in a day than it was built in one, was characterised in architectural terms by a sort of auto-cannibalism: the city of the popes began devouring the city of the emperors. My tutor at university, Dr James Lawson, memorably described it as “scavenger architecture”. The columns at Santo Stefano Rotondo are in great part examples of this scavenging. 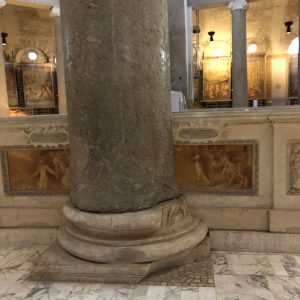 The base of a very large repurposed granite column

In the central circular space, two vast columns date to a twelfth century restoration of the church, by then ravaged by time, earthquakes, and Robert Guiscard. They support three trasversal arches constructed for Innocent II (1130-43) to support a new roof. Made of Egyptian granite, they are bewilderingly vast. As I stood in front of one of them, gazing at its base in the cold and silent church on a Wednesday afternoon in the first quarter of the twenty-first century, there was something overwhelming about the neatness with which it slotted into the choir enclosure; something about the journey it had made from the quarries of Aswan, up the Nile, across the Mediterranean (without sinking!). These columns once stood in a grand court of law (or palace, or temple) where they advertised the realisation of the “empire without end” promised by the Jupiter of Virgil’s imagination. They survived invasions and earthquakes, before being moved here (how many squashed people?) and being so elegantly slotted into the choir enclosure. 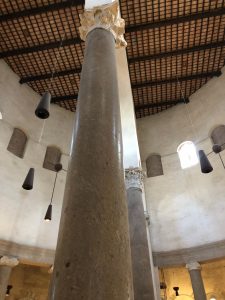 For a moment I was quite out of time, an astonishing and moving sensation. I stared and stared at that enormous piece of stone, all alone in the gloomily cavernous building. I felt the prick of tears and, blinking, returned to a Wednesday morning in the beginning of 2019. I took a couple of photographs (for after the passing of the Stendhal Syndrome comes the need to say something pithy on Twitter, or perhaps write a blog post) and walked out into the pretty colonnade to see a small Fiat full of nuns drive erratically into the driveway. 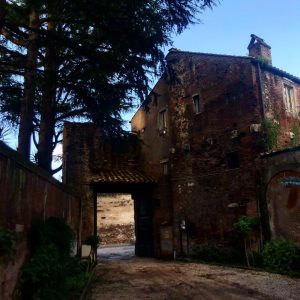 Driveway of Santo Stefano Rotondo, without nuns in a Fiat.

This really happened, because Rome is sometimes just too Rome. Her scenes are orchestrated by an invisible director, and dramatic bathos is found on every corner. Fellini didn’t make it up. Another time I’ll tell you about the hearse blocked in a tight cobbled street by a dust-truck outside a bakery. A coffin in a shiny Jaguar, dustmen, and people eating pizza rossa offering helpful suggestions. That happened on the same day.