The Aurelian Wall: Rome’s largest ancient monument, or “one thing too many”

Once having found the Wall I could not forget it, or be unaware of its continuity. Its reemergences into view, out of covering buildings, never are not dramatic: whether in view or not it is there, and shapes one’s sense of the city. – Elizabeth Bowen, A Time in Rome. 1959.

The largest ancient Roman monument in the city of Rome gets surprisingly little attention. Far from the madding crowds of the Colosseum, the late Imperial fortifications of the city bear the name of Aurelian, the Emperor under whose reign they were erected. The very existence of the walls is indicative of the troubled state in which the Empire found itself by the late third century. During the glory years of the Roman Republic the Servian Walls, built after the Gallic invasion of the 4th BCE, were abandoned and for over half a millennium no fortifications were required. 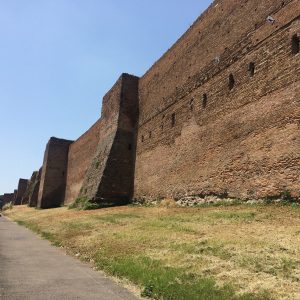 They were a symptom of the imminent demise of the world’s greatest superpower, and the hurry with which they were built was indicative of the urgency of the situation. Between 271 and 275 CE a circuit of fortifications 18 km (12 miles) long was built. These would remain the defences of the city of Rome (with additions and modifications) until 20th September 1870 when they were definitively breached by the Bersaglieri of Victor Emmanuel II at Porta Pia, almost exactly sixteen centuries after their initial construction.

Visitors tend to pass through the walls on the way in from the airport, a blur of red brick amid umbrella pines on the via Cristoforo Colombo.

The Aurelian Wall meets the via Cristoforo Colombo

Once ensconced in the city, the same visitors may find themselves seeking out the delights of the Galleria Borghese, and focused not so much on straying beyond the wall but rather on negotiating the alarming section of urban highway which runs alongside it (I speak from experience). The viale del Muro Torto (literally the “big road of the wonky wall”) provides a jarring and anachronistic chasm for the timid pedestrian, momentarily trapped between the handsomely showy fin de siècle palazzi on the sweep of via Veneto & the bucolic delights of the Villa Borghese park.

Or perhaps they visit the piazza del Popolo, bounded by Bernini’s seventeenth century gate. Built to welcome the newly converted Queen Christina of Sweden, who swept in like a maelstrom from the north, the gate was remodelled with such enthusiasm that the fact that it incorporates within its structure part of a third century fortification is far from immediately apparent.

Elizabeth Bowen had a theory why the Wall (the capital “W” is hers. I think she is quite right, it demands a capital) was so often overlooked:

The Aurelian Wall is played down by guidebooks, whose references to it are buried, oblique and grudging. This may be because it is one thing to many”

Perhaps the Wall is indeed “one thing too many”, or perhaps it is simply, for the most part, slightly removed from the city centre and requiring a specific (if not long) trip. This “otherness” is in many ways part of the charm, offering a glimpse into a timeless past and a distinct sense of having gone “beyond”, rather as Elizabeth Bowen recounted in her inestimably charming book cited above.

To make a journey to the south east of the city centre, along the via di Porta San Sebastiano, is to be rewarded with the extremely satisfying section shown in the first photograph and the small but excellent Museo delle Mura. It is one of eight small museums run by the city of Rome which have free entry, numbers of visitors being so small as not to warrant a ticket office. The highlight of the visit is undoubtedly view from the ramparts of the Porta Appia, later named the Porta San Sebastiano, looking out across the lush greenery of the Park of the Appian Way towards the Alban Hills. 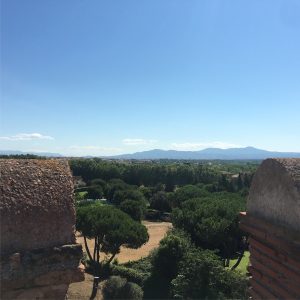 The view from the ramparts