Moving Mountains: A geological map of Empire at the Centrale Montemartini. 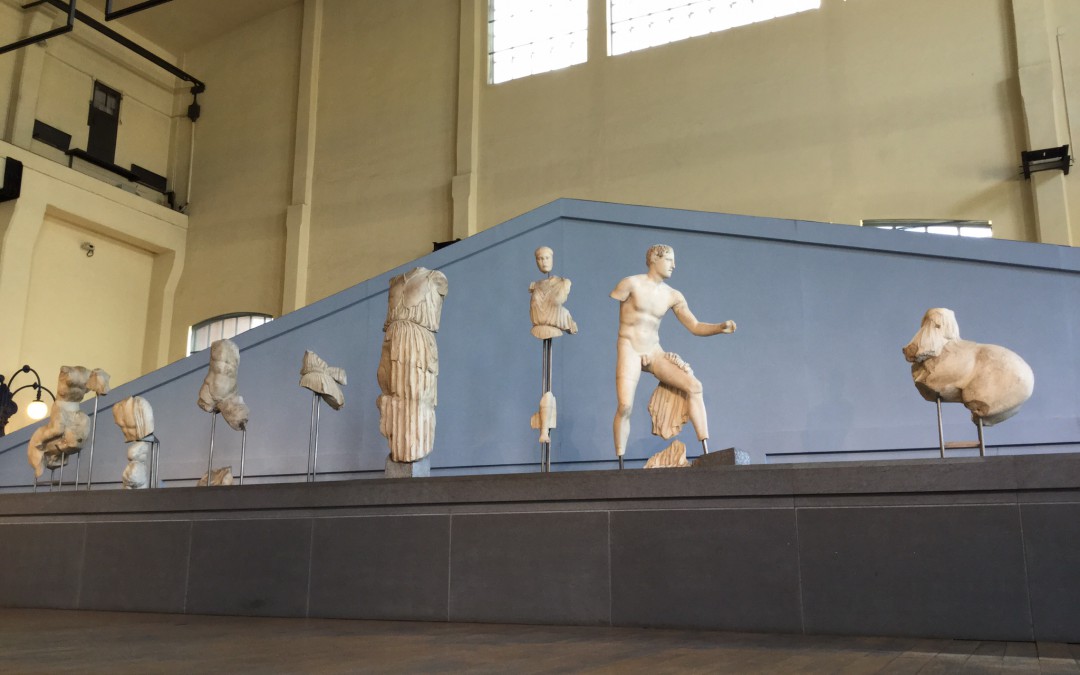 A couple of weeks ago I was once again invited to be involved in Context Travel’s admirable series of Tours in the Public Interest. The focus of this year’s series is on museums which are regularly open to the public, but which get far fewer visitors than they deserve. I chose the Centrale Montemartini (about which this from 2013), a former thermo-electric power station converted in the late 1990s into an outpost of the Capitoline Museums; a splendidly evocative juxtaposition of early 20th century technology and ancient sculpture.

My brief was to choose three (ish) things, and a thread to connect them. Given the massive and material nature of the machines which provide the backdrop to the collection, I chose to consider the matter from which the ancient art displayed was itself made. The quality and types of stones used in Roman buildings, and in sculptural and architectural decorations, tell us a great deal about those buildings: their status, for whom they were made, and Rome’s fortunes at the time.

From the early use of rough local tufa (the compacted volcanic ash which forms Rome’s “seven hills”) to the importation of red porphyry from the eastern deserts of Egypt, the very stuff from which the city was built can be seen as a prism through which to view its expansions and triumphs. Chapter 36 of Pliny the Elder’s Natural History, the “Natural History of Stones”, is one of the great sources of information regarding the types of stones used in Roman decorations, even though Pliny himself is, with a rather waspish tone, disapproving of the fondness for exotic decorations which he describes as “the leading folly of the day”. (The 38 ft columns of Lucullan marble imported from Asia Minor for the house of M. Scaurus c.60 BC are described as “a first essay in vice”). 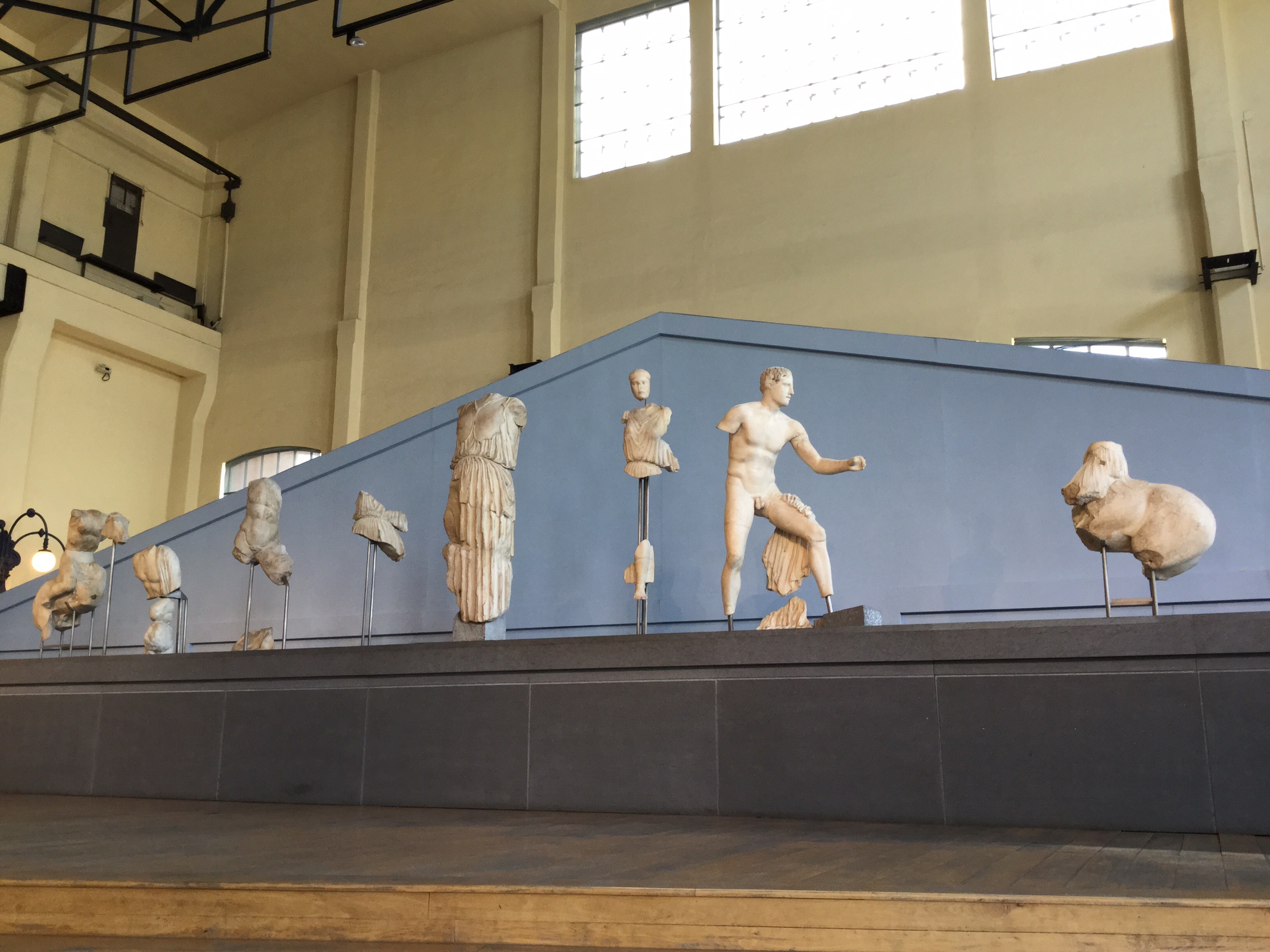 Pediment sculptures from the temple of Apollo Sosianus. Parian marble.

First dedicated in 431 BC to Apollo the healer in the Prata Flamina (where later the Theatre of Marcellus would be built), the temple was rebuilt by Gaius Sosius in the Augustan period. It was probably during this period that the pedimental decoration was “borrowed” from Greece (possibly the sanctuary at Eretria). It dates to the mid fifth century (making it roughly contemporary with the Parthenon marbles, to which it is analogous in style) and is made of marble from the island of Paros in the Cyclades. Here we see not just the importing of raw materials, but of works of art which were “ancient” for the builders of Sosius’ new temple. A reminder that for a period the very best Roman art was in fact Greek art. As Horace (alive at the time of the building of Sosius’ temple, and the addition of these imported sculptures) said:

(Captive Greece took captive her own rude conqueror, and brought the arts to rustic Latium). 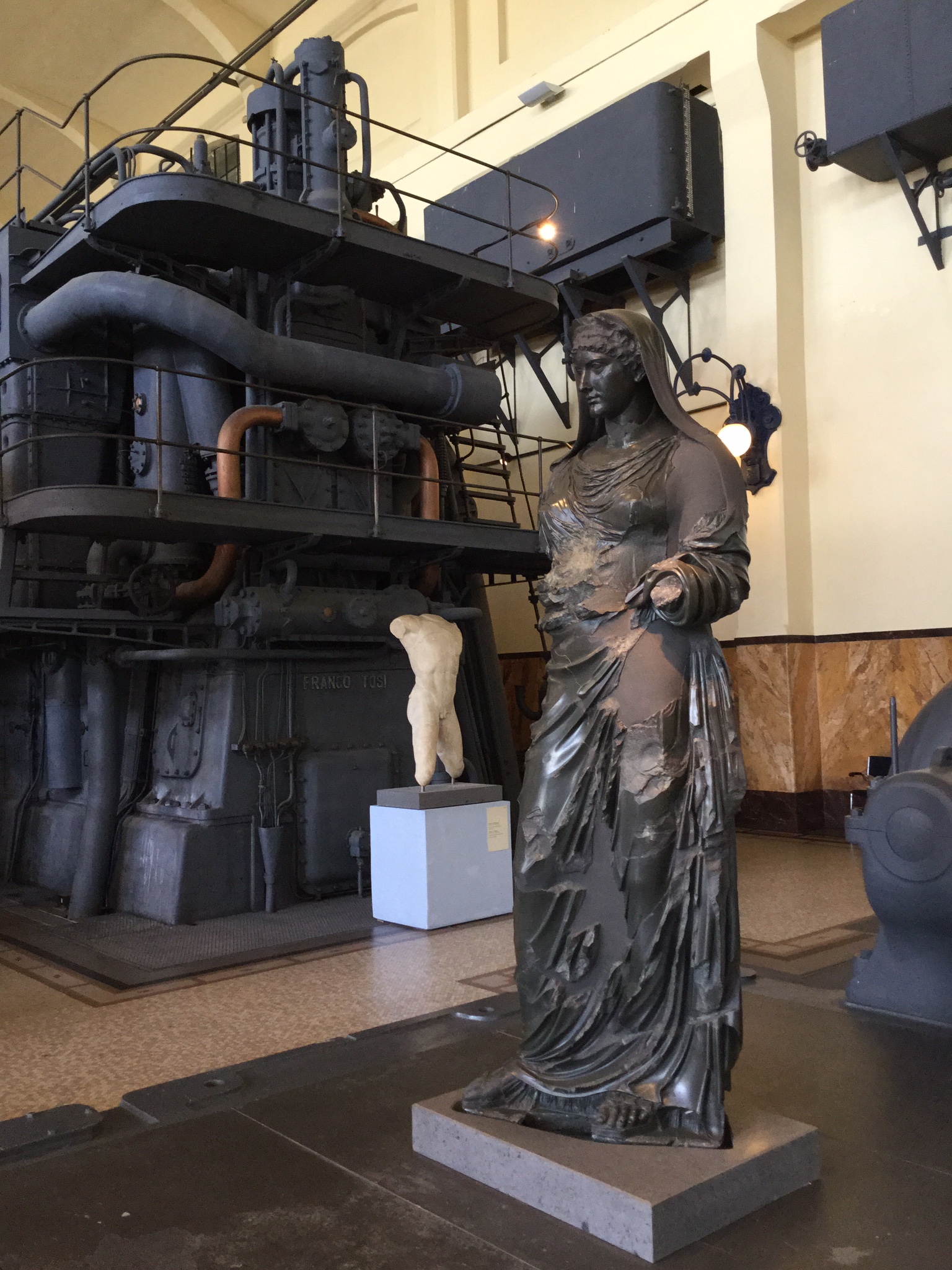 Basanite statue of Agrippina Minor, found on the Caelian Hill in the late 19th century.

This statue of Agrippina the Younger was found in the area of the temple dedicated to her husband (and uncle) the Divine Claudius on the Caelian Hill. She is shown in the guise of pious widow despite the assertions of several sources (Suetonius, Tacitus and Pliny for starters) that she had poisoned poor doomed Claudius with mushrooms. Thus she would place her teenage son by a previous marriage, Nero, on the throne. Five years after he came to power Nero would hatch an elaborate plot to murder his mother. All very Game of Thrones.

The statue is made from basanite, an igneous volcanic rock rich in iron which takes its name from the Greek verb “to test”, an etymology which originated in Egypt where the rock was used as a touchstone. The quarries of basanite were at Wadhi Hammamet in Egypt’s eastern desert, and are mentioned in the earliest known geological map (now at the Egyptian Museum in Turin) drawn up for Rameses IV in the twelfth century BC. 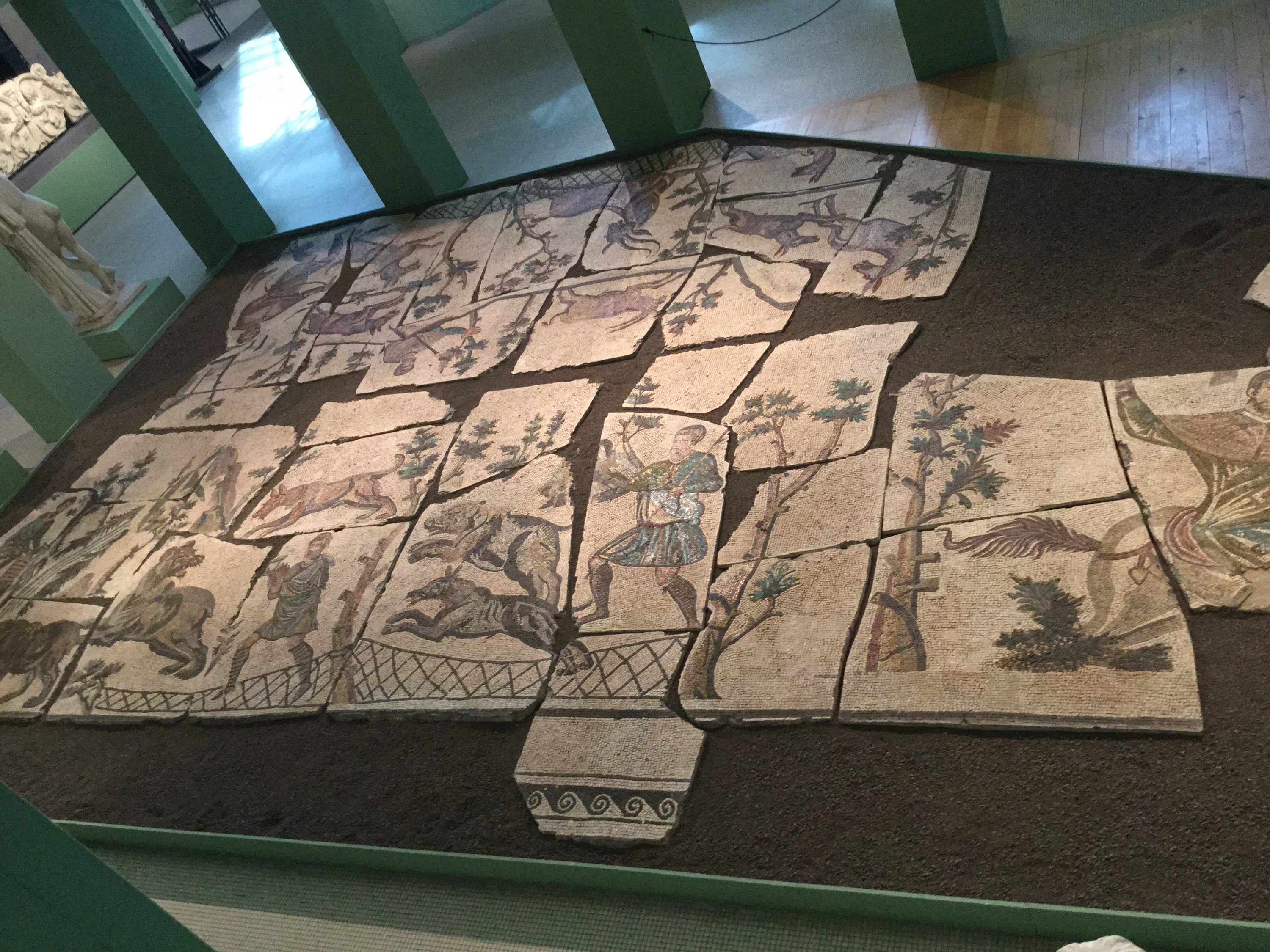 The early twentieth century building of the underpass behind Santa Bibbiana (a Baroque rebuilding of an ancient church with a sculpture by Bernini and frescoes by Pietro da Cortona nestling stoically amid railway lines) yielded a mosaic showing the capture of wild animals for the venationes (animal hunts) staged in amphitheatres. 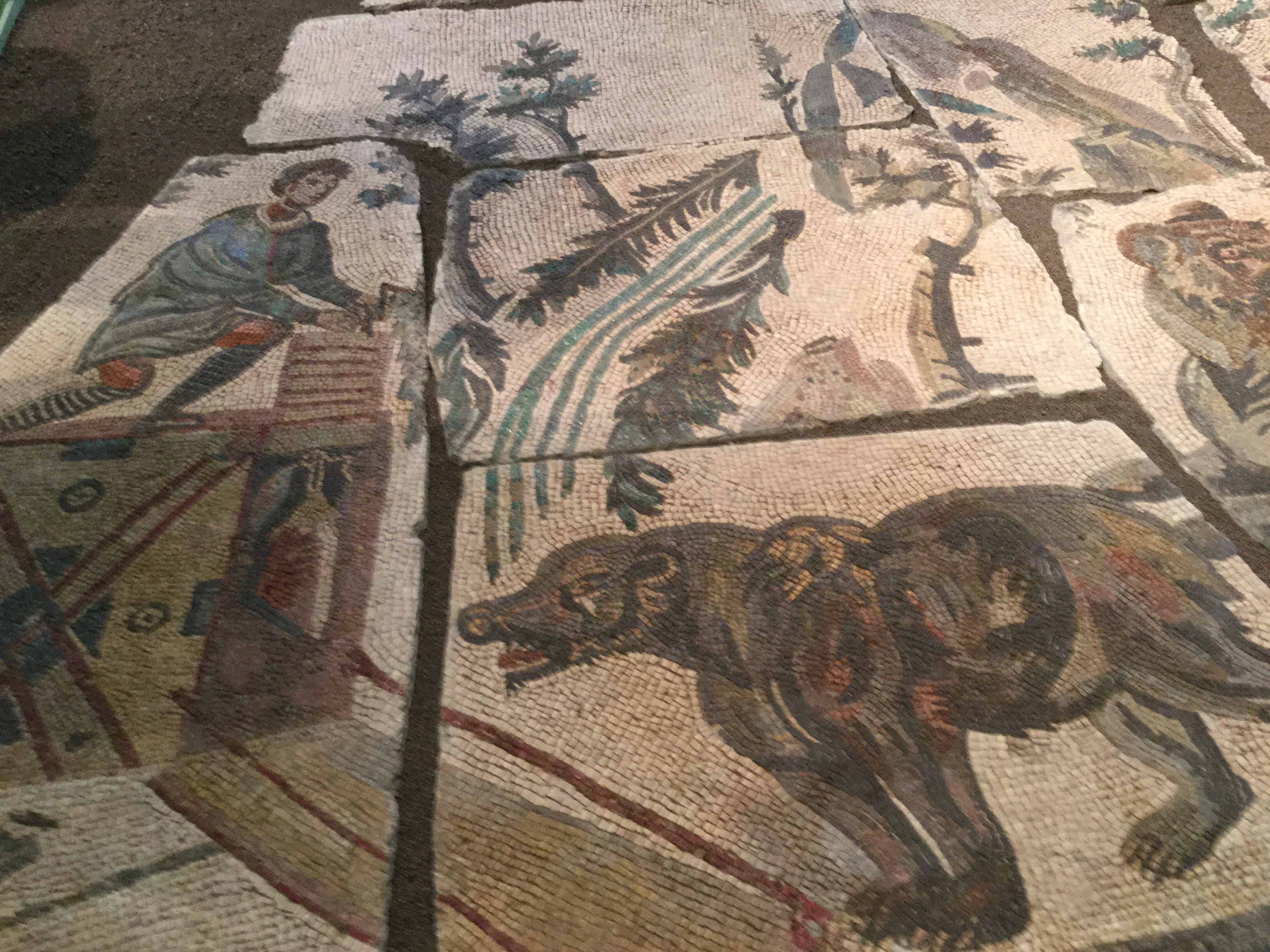 mosaic detail: a bear lured into a trap with a ham

The mosaic dates to the fourth century and once decorated the opulent Horti Licinii, a sprawling villa/garden complex of great prestige on the Esquiline Hill which had belonged to the family of the third century emperor Gallienus. Even in a period of Imperial decline, its palette uses colours from the far reaches of Empire: serpentine of Greece, Numidian yellow from Tunisia, Aswan pink granite from Egypt and more. 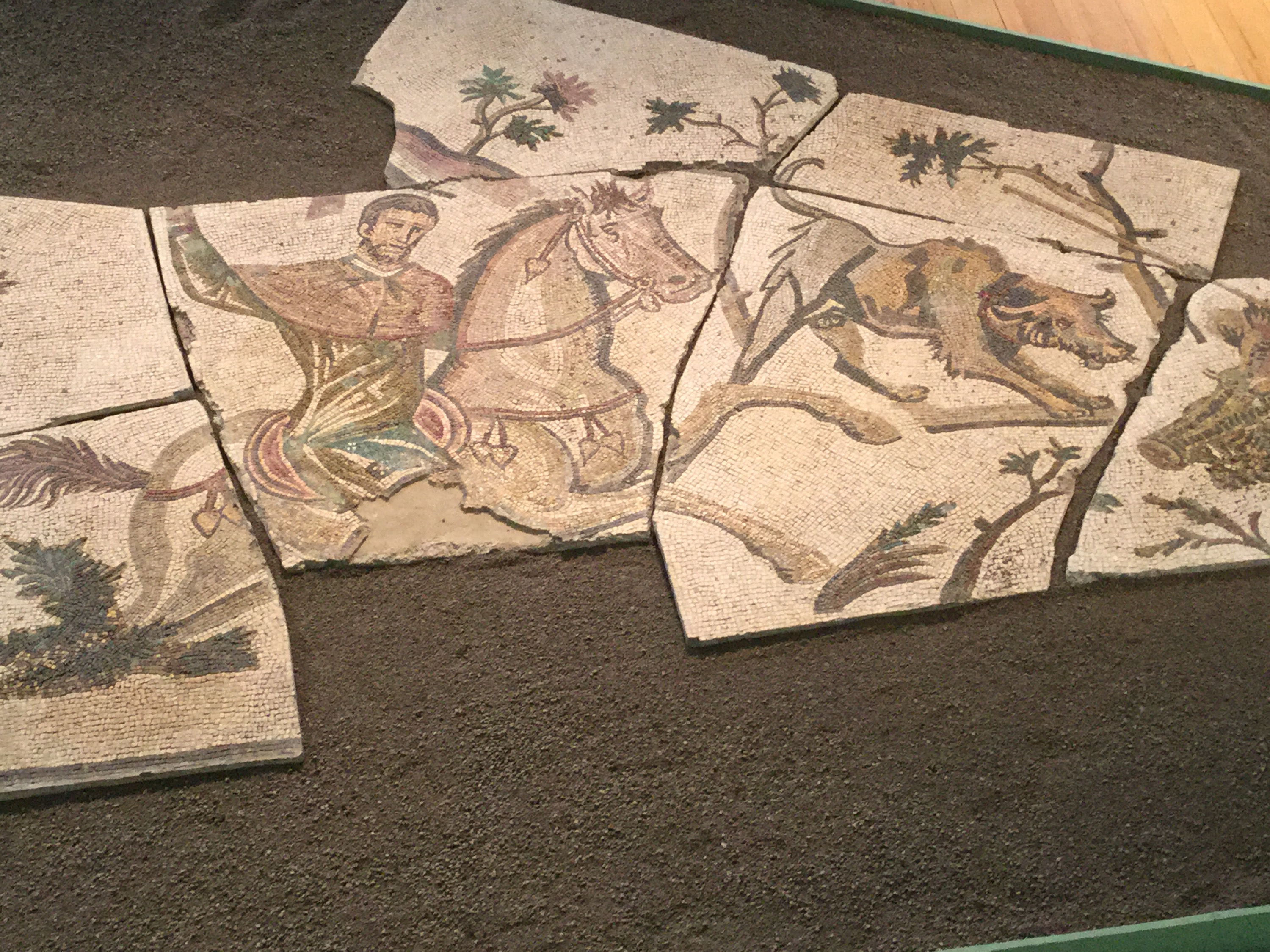 Rather as the lions and tigers and bears (oh my!) being captured evoked an sense of the exotic expanse of Empire to the citizenry at the Colosseum, so the art and architecture of Rome provide us with what we might think of as a geological map of Empire.