The “Protestant” Cemetery at Testaccio. 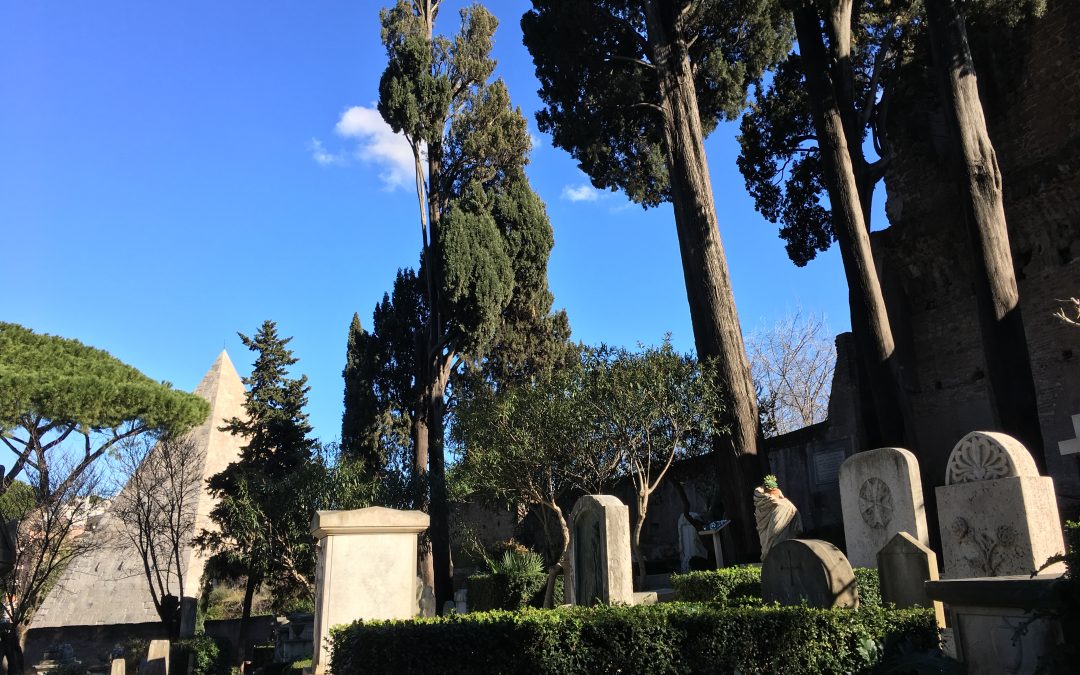 “The English burying-place is a green slope near the walls, under the pyramidal tomb of Cestius, and, as I think, the most beautiful and solemn cemetery I have ever beheld.” 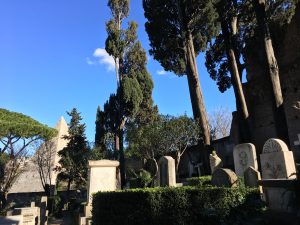 Nestling between Monte Testaccio, Rome’s ancient landfill site, and the Pyramid of Gaius Cestius is the Cimitero Acattolico. Properly translated as the non-Catholic cemetery, it is most often referred to in English as the Protestant Cemetery. This inaccurate name, which ignores many of its residents, dates back to its origins. When the Stuarts arrived in Rome in exile many of their entourage were not Catholic: loyalty to the Jacobite cause did not preclude Protestantism. The land was donated by Pope Clement XI who one imagines felt benevolently toward those he presumably deemed heretical Picts, involved as they were in the task of returning Catholics to the throne of Great Britain.

Rome’s appeal was such that the demographic of the cemetery’s inhabitants soon widened. Today amongst the tombs densely packed amid oleander and pines on a slope bounded by the ancient Aurelian Wall are the remains of members of many religions, and of none (of the last, the most celebrated is undoubtedly Antonio Gramsci, founder of the Italian Communist party). 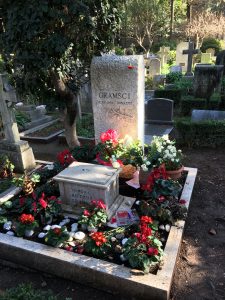 Perhaps the most famous tomb is that of John Keats who died in 1821 aged 25 of tuberculosis. Like so many in the Cemetery he came to Rome for the good of his health, thoroughly underestimating the cold damp winters, and the ill-fitting windows of ancient palazzi. He spent his last months in an apartment overlooking the piazza di Spagna. (One can now stay in the delightful rooms directly below his apartment courtesy of the inestimably splendid Landmark Trust).

The grave of the “Young English Poet” is in the older, less crowded area at the foot of the fabulous Pyramid. Next to it, a matching tombstone bears the name of the painter Joseph Severn, who tended to Keats on his death bed and died a full six decades later at the age of 85. 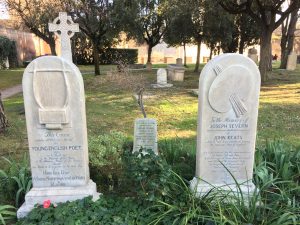 The graves of John Keats and Joseph Severn. Between the two is the tombstone of Severn’s infant son, Arthur.

After Keats’ death, Severn had a sporadically successful career as a painter, founded the British Academy of Arts near the Spanish Steps. In 1861 he became British Consul to Rome, a position he held for over a decade, throughout the last, fiery decade of the Risorgimento. Between the two headstones is a small tombstone bearing a short inscription, the baldness of which only serves to emphasise a chasm of tragedy and regret:

Perhaps seeking to add weight to the short life of poor Arthur, the last line is a rather curious exercise in name-dropping:

“The poet Wordsworth was present at his baptism in Rome”.

The other English “superstar” of the cemetery is Percy Bysshe Shelley, another great Romantic poet who would meet his end in Italy. Indeed he would not long outlive John Keats, whom he had elegised in the poem Adonais. Unlike Keats’ tortured and slow expiration from tuberculosis in a room overlooking the piazza di Spagna, Shelley’s death just over a year later would be of the – quite literally – Sturm und Drang variety.

Having inexpertly souped up his boat with additional rigging to rival Lord Byron’s equally Romantically named Bolivar, he rashly proceeded to ignore warnings about the weather. The Don Juan sank in July 1822 during a storm in the Bay of La Spezia. 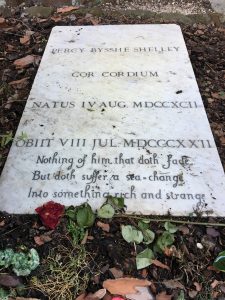 The grave of Percy Shelley

When his body washed ashore at Viareggio a week later, it was cremated on the beach and his ashes were subsequently interred at the cemetery in Rome. Their present position by the ancient walls the second spot they have occupied, chosen by Shelley’s friend Edward Trelawny, himself buried in the next plot.

The tombs of Keats and Shelley are those which undoubtedly garner the most attention, but the cemetery is packed with intriguing tombs, each offering a glimpse into the lives of those who died far from home for a myriad of reasons.

Some I find myself drawn to on every visit, such as beautiful lauded Rosa Bathurst who was resident in Rome and whose widowed mother erected a tomb which tells in detail (both in English and Italian) of her virtues and the tragedy of her accidental death. She was just sixteen when her horse took fright and lost his footing, and they both drowned in the swollen flood waters of the Tiber. 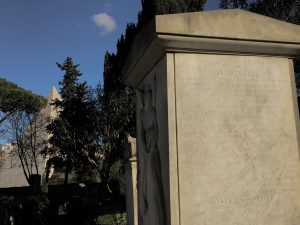 The tomb of Rosa Bathurst.

Directly in front of Shelley’s tomb in the newer part of the cemetery is a monument to the actress Belinda Lee; an elegantly simple piece of travertine bearing a draped classical torso. Born in Buddleigh Salterton, which even its residents will I’m sure agree is an unlikely breeding ground for film stars, her short and turbulent life ended in a car accident in California aged 25. Two years earlier her affair with Prince Filippo Orsini had caused great scandal in Roman society, and had ended with the suspected (and unsuccessful) attempted suicides of both parties. As a result Pius XII stripped the Orsini prince of his title as Assistant to the Papal Throne. 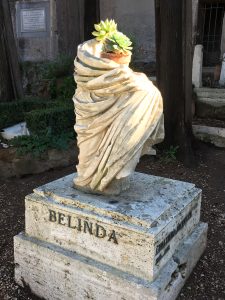 The monument to Belinda Lee

However perhaps the most unfortunate of those to find themselves passing all eternity in the shadow of the Aurelian Walls were two airmen who never saw anything of Rome at all. They were killed in an accident when the Handley Page Type O they were flying from England to Cairo crashed as it landed for refuelling at Centocelle airport in May of 1919. Their illustrious cargo was Lawrence of Arabia who still had several of his nine lives remaining, and survived with a couple of broken ribs. 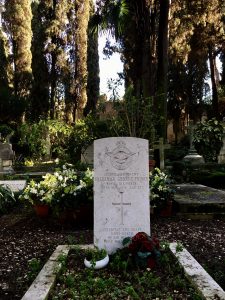 The grave of Sidney Spratt, killed alongside Frederick Prince in a refuelling accident at Centocelle.

The cemetery could be incorporated into a tour of Testaccio and/or the Ostiense district (which could also include the Centrale Montemartini, about which this, and this).

There is no entry fee but donations are gratefully accepted.