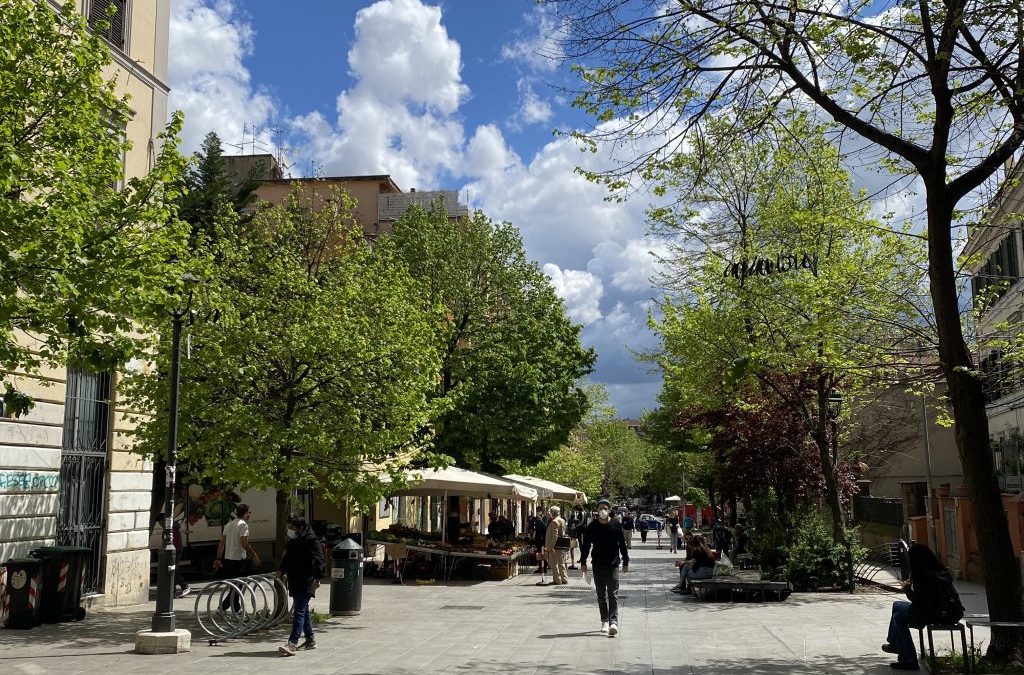 On Tuesday, which happened to be Rome’s birthday, our local fruit and vegetable market reopened for the first time in six and a half weeks. Lots of fresh produce markets in Rome have stayed open right through the national quarantine but not, for some reason, the open air ones. The market in our neighbourhood is run by stall holders from Fondi (about a hundred and twenty km south of Rome), the descendants of the first stall holders who set up when the neighbourhood first developed as housing for tram-drivers and workers at the nearby railway in the early twentieth century. They work incredibly hard. I once overheard a stall-holder saying (with a smile) that he got up at three every morning to sort out his homegrown produce, then pick up more at the major wholesale market in Fondi, drive to Rome, bring umbrellas and trestles out of their lock up, set it all up by seven, begin dismantling everything at two, drive back, see to their plots and hens and then do it all again. Six days a week.

Older residents remember when the market was one of the biggest in Rome, in the 1960s it was over a kilometre long. Now there are far fewer stalls than there were even ten years ago, occupying a pedestrianised stretch of road with public benches, and in normal circumstances, outdoor tables of cafes and bars. There’s also an excellent butcher’s shop with a facade of which I’m very fond, a brilliant bakery, and an alimentari with at least ten different types of prosciutto crudo and more kinds of cheeses than you can ever try. The stallholders we favour are called Salvatore and Giuliana, the butcher’s called Ugo, the lady in the bakery is Anna, and Emiliano is our pal at the deli. I love it.

Today I went to buy some vegetables at the market which was cautiously getting back into the swing of things. Stall-holders (like all people working in contact with the public here) are obliged to wear masks, and provide (like all supermarkets) disposable plastic gloves. There were roped off areas in front of each stall, with one person allowed to the stall at a time, and disciplined queues with people well strung out. It’s probably the first time in all these years I haven’t had my spot among the rabble usurped by a deceptively tenacious elderly lady. The sun was shining after three solid days of rain, and the stall holders were all smiles. Everyone was exchanging “we missed you”s, and – even two weeks on – “Happy Easter”. The trees were blossoming and everything felt as if it might be approaching something like an approximation of normality. I’m well aware we’re a long way from that, but for now I’ll take the frisson of delight it gave me.

I bought three different types of tomatoes (it’s not really yet tomato season but they were still delicious), lettuce, potatoes (they have such good potatoes), a great big muddy bunch of carrots, celery, onions and they threw a fistful of herbs on the house. We had the tomatoes for lunch, in a frugal panzanella with old dried out bread, capers from last summer’s trip to the Aeolians, olives that needed to be finished up, red onion, oregano, and basil. Salt, a dribble of water, a good stir and olive oil..

For supper those delicious potatoes made their way into the cheesy soupy carb fest which is pasta e patate. And we allowed ourselves to wonder, might this be if not the beginning of the end, perhaps the end of the beginning?