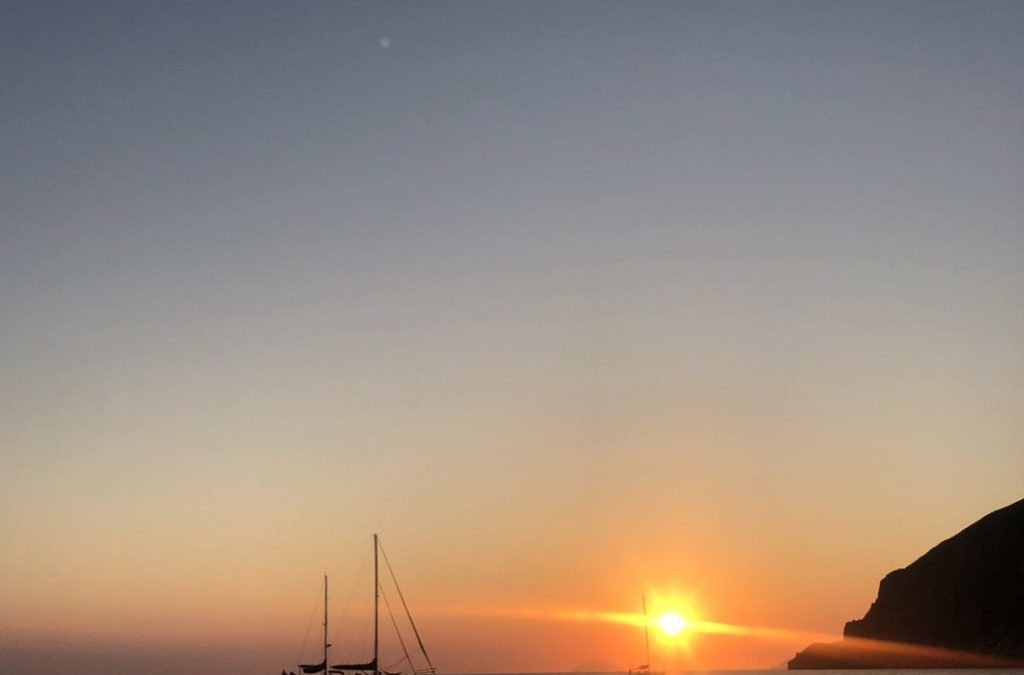 Today we’ve officially gone beyond the quarantine: day 41 of 40 – still buffering. I feel like I’ve lost all grip of what’s happening in the Italian pandemic situation. Things are, I think, improving? Though perhaps not as much as they should be? And when we’re allowed back out again will it all pick up where it left off? Honestly I’ve no idea, and I don’t really want to know: in a way it’s reassuringly infantilising to be entirely released from decision-making.

So my thoughts have been wandering far from all of this, which I’m well aware is a great privilege. Today those thoughts were of the sea. For whatever reason, my phone presented a photo from our August sailing trip around the Aeolian Islands. Gosh, last summer feels like an awfully long time ago! Frankly, early March feels like an awfully long time ago. We started contemplating another boat trip this summer: surely a sailing boat is the social distancing holiday par excellence? There are plenty of fabulous islands in striking distance of Rome. If nothing else it was an agreeable daydream.

It was such fun: two shoeless weeks (and only the occasional flip flop) anchored in deserted bays; exploring volcanoes both verdant and desolately lunar, active and not. We counted shooting stars, swam in unfathomably deep and impossibly blue sea; we ate delicious granite, capers, tomatoes, cannoli, and drank chilled Malvasia. Wonderful.

The patron saint of the Aeolian Islands is St Bartholomew, who I mentioned in my post on Day 36 of the Roman Quarantine. Bartholomew is said to have been flayed alive, perhaps in Armenia, and so in paintings is usually shown holding his own skin, as in Michelangelo’s fresco of the Last Judgement in the Sistine Chapel. I’ve always thought it iconographically convenient that so many of the early martyrs were all killed in differently horrific manners. Parts of his body, according to Gregory of Tours, miraculously washed up on the coast of Lipari. From here in the ninth century parts of the parts were transferred first to Benevento, and then to Rome, hence the church on the Tiber Island.

Saint Bartholomew is a big deal on the Aeolian Islands; if you live amid active volcanoes a patron saint is a serious business. The archipelago is the product of ruckus between tectonic plates just off the north-east coast of Sicily. In its inexorable journey towards Europe, the African continental shelf is forced beneath the Eurasian plate. The resultant cluster of islands, a bubbling effusion of the skirmish beneath, is named by the Greeks for Aeolus, god of the winds. One of the islands, they believed, was home to the forge of Hephestus, god of fire. Subsequently the Romans would claim the island as the forge of their god, Vulcan. It would give its name to every fire-spewing mountain.

It is a liminal and evocative world of volcanoes and gods, of fire and brimstone; on the cusp of the earthly and of the underworld. A landscape both exquisite and disquieting; to be tamed. The feast of Vulcanalia celebrated by the Romans over the 23rd and 24th August sought to placate the god, and here he was particularly to be feared. It is perhaps unsurprising, therefore, that the major feast celebrated in honour of St Bartholomew on the island of Lipari is 24th August. Towards midnight on the 24th August we positioned ourselves among hundreds of boats bobbing above the un-anchorable depths of Lipari harbour.

Dinghies and fishing vessels, sailing boats and oligarchic super yachts and, next to us, a pleasure boat offering an evening on the water (complete with lights and music borrowed wholesale, and without irony, from a 1980s school disco). The boats all entered into a skilful and respectful dance. The disco continued blithely—Queen blaring from the shonky sound system—as the Archbishop of Lipari appeared in a spotlight on a balcony beneath the castle. Loudspeakers competed with Freddie Mercury to broadcast his blessing of the boats. This done, the fireworks began: twenty minutes of the most spectacular I have ever seen, a gesture to Vulcan reflected in the calm sea; an atavistic appeasement of the primordial brawl beneath the earth’s crust.