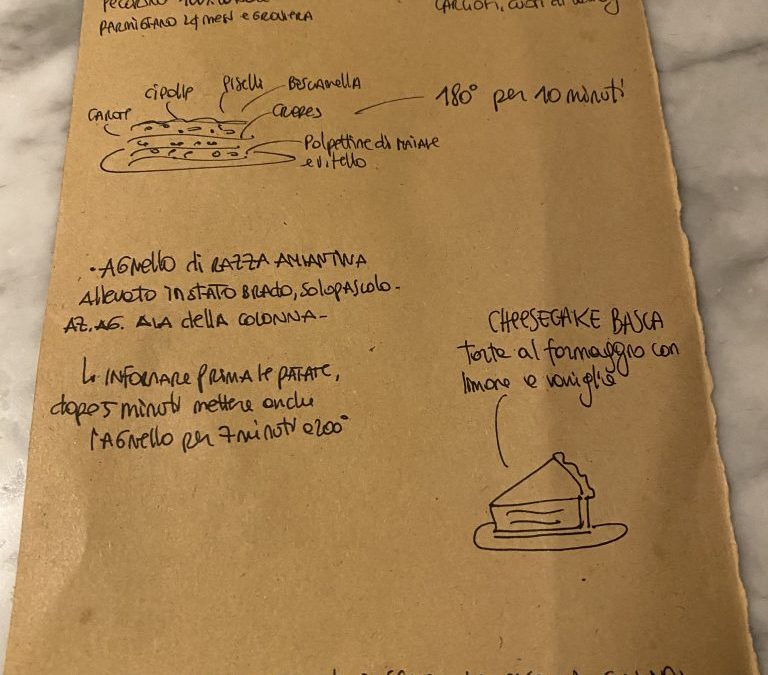 Today marks five weeks of the Roman Quarantine, though I think we can all agree that time has been pummelled, pushed and pulled, and stretched so far beyond its elastic limit that this marker has little significance: it feels more like an intriguing fact, to be acknowledged dispassionately, but ultimately meaningless. It simultaneously feels as if the announcement of the shutdown were made both in a different geological era and yesterday. There are three more weeks to go until the extreme measures are scheduled to start to be lifted: surely not the beginning of the end, but at least the end of the beginning.

After yesterday’s spectacular SantoPalato Easter lunch, this evening we attacked the leftovers with gusto for an early supper. Organic lamb reared grazing beatifically in Southern Tuscany was wonderful and gamey, roasted with potatoes which soaked up the extraordinary and delicious fat. On the side we had the remains of the vignarola, yet another reminder of the passing of time.

Vignarola season is one of my favourite moments in the Roman culinary calendar, it’s a sort of spring vegetable stew characterised by the last of the year’s artichokes, and the first of the broad beans and peas. The other ingredients vary but might include, as this supremely good example did, asparagus and lettuce. Old school Roman trattorie tend to cook it (as Romans will cook many of their vegetables) until brown and sludgy, which whilst “authentic” (whatever that means) isn’t how I prefer it. They also often add guanciale, an aggressive over-gilding of the lily to my mind. I like it braised simply in olive oil with a little water and not too much salt, each of the vegetables added in the reverse order of the time it takes them to cook (artichokes in first, peas last, everything else in the middle). A successful vignarola is a cohesive whole, while maintaining the taste of each individual ingredient. A symphony of spring which marks the lengthening of days, and the promise of summer. It is a Venn diagram of seasonality. Blink and you miss it.