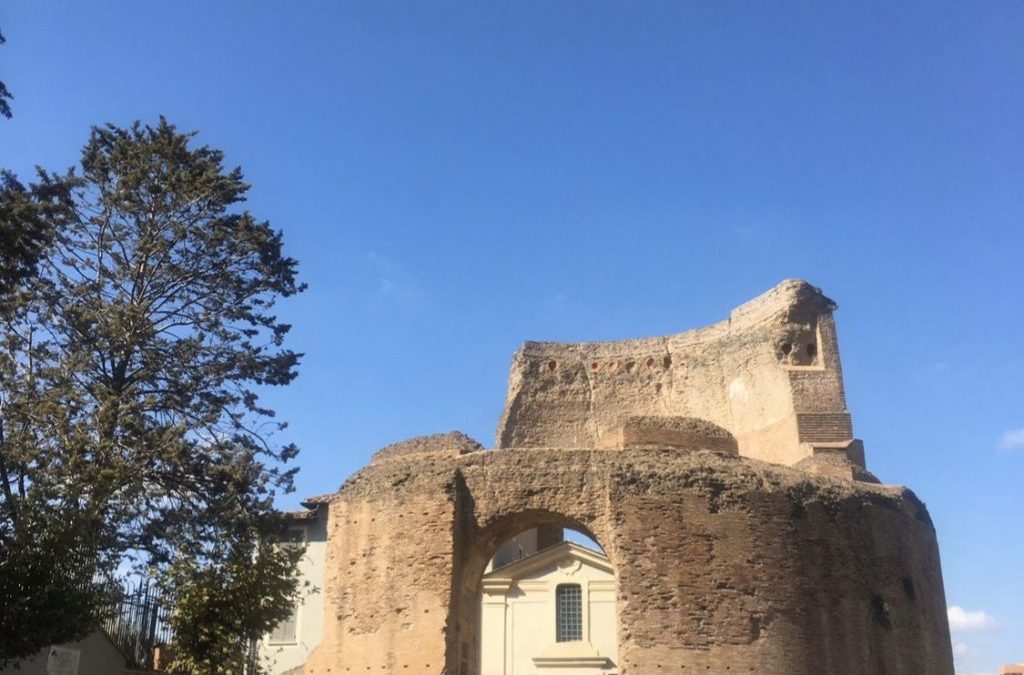 This morning I woke to the sounds of bells ringing for Palm Sunday, announcing a mass no one would go to. In accordance with the measures currently in place in Italy to contain the spread of COVID-19 – measures fully supported by the Pope who is, I think we can all agree, a fairly sensible chap – all church services are to take place without congregations. And so it was that the bells pealed from the parish of Sant’Elena fuori Porta Prenestina, and no one went. The church is a simple but handsome early twentieth century evocation of an early Christian basilica. The basilical form of early churches echoed the public halls and legal spaces of Imperial Rome: rectangular with an apse at one end. As the liturgy became more complex, and the clerical hierarchy more populous, transepts sprouted on either side of the main altar and the basilical church footprint would become that of a cross.

The choice of this ancient form in Pigneto in the early twentieth century was not simply a whim. The church was commissioned by Pope (now St) Pius X in 1913 to commemorate the sixteen-hundredth anniversary of the Edict of Milan in which Constantine decriminalised Christianity, and it was dedicated to St Helena, mother of Constantine: the recollection of the early Church was ideological as well as formal. The dedication was chosen in reference to the area’s historic connection with the proto-pilgrim who is said to have travelled to Jerusalem at the age of seventy-two and to have returned with a vast haul of relics including the Holy Staircase, the True Cross, columns from the Temple of Solomon, and the Crown of Thorns.

She lived a kilometre or so from here, just inside the city walls at the Sessorian Palace (now in part occupied by the splendid church of Santa Croce di Gerusalemme), and was buried two kilometres in the opposite direction, along the via Casilina, where the remains of her mausoleum can still be seen – a surprising sight amid tram lines, scrubby weeds, and some unlovely postwar concrete. The area where we live is referred to as the “lands of St Helena” (terre da sancta Helena) in documents surviving back to the late fourteenth century when the produce of nearly forty acres of vineyards and farmland was harvested and sold by the prior of Santa Maria Nova in the Roman Forum.

The church, and the neighbourhood – which was heavily bombed during the Allied strikes of 19 July 1943 owing to its proximity to the nearby railway lines and goods yards of San Lorenzo – feature as the backdrop to much of Roma Città Aperta (though the stern interior is substituted with the photogenic Late Renaissance church of Santa Maria dell’Orto in Trastevere).
Today the bells of Sant’Elena rang out, and the priest held Mass in an empty church, live-streaming on YouTube, and because it’s Sunday we once again ordered the most delicious lunch delivery from SantoPalato. We ate delicious fried things, and the most splendid tortellini, and will have the meatballs and greens for supper. They also threw in a slice of lasagne on the house, because that’s the sort of thing people do in Rome.