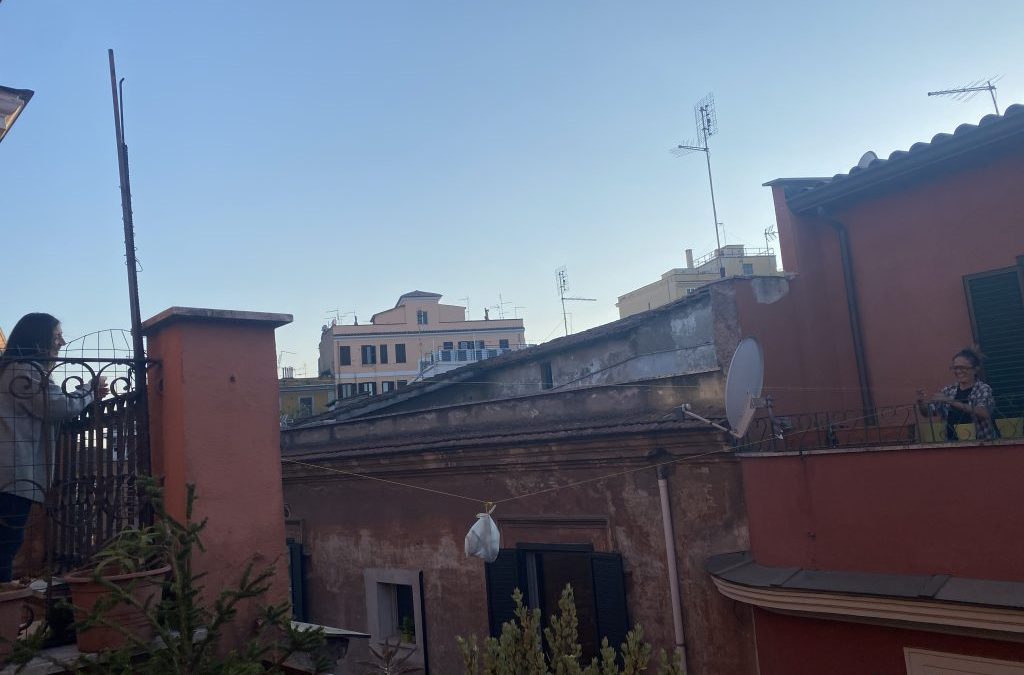 The sun shone, and I sat on our newly pristine terrace and reread The Secret History (Donna Tartt, not Procopius) because a) I love it though I probably haven’t read it since I arrived in Rome, and b) I can’t concentrate on anything more worthy at the moment. This is also why this post will be blessedly short.

When I tired of reading I took cuttings from the wonderfully hardy succulents which survived the months of neglect when I had work (was that real? Did I actually do all of those things, every day, back before the Happening?) which was my excuse, but also laziness which is closer to the mark. The other noteworthy survivor is the Miraculous Christmas Tree. Our neighbour on the terrace across our little road had some pots she was looking to plant something in, so I filled a bag with bits of aloe and other vigorous succulents (the names of which I am ignorant) and the neighbours on the terrace next to us hooked it up to the system they developed near the beginning of the Quarantine. It was a jolly moment: we were each in our own little bubbles, but also not.

A little later, as I podded broad beans in the last of the sun, I heard a thunk from across the road, our neighbour had been Facetiming her mother when the phone slipped over the railing. Halted by a headphone wire it landed on a small sloping ledge where, owing to some oddity of the coefficient of friction, it remained. Her mother continued chatting away to (presumably) an image of the sky seen from three floors above ground. “I’ll call you back later ma, could you hang up, yes, of course everything’s fine”. A confab followed, our three separate terraces united in attempting to solve the seemingly hopeless situation. The chap next door ran downstairs, a sarong tied round his waist and outstretched to catch the phone were it to fall, strategies were discussed, a dustpan was found and employed to scoop up the errant phone and and all was well. In any situation dropping a phone is an expensive inconvenience, but at the moment the last thing that’s needed is a heightened sense of isolation. Not only was this averted, but it was averted with friendliness and teamwork, and a sense of togetherness that put us all in a very good mood indeed.