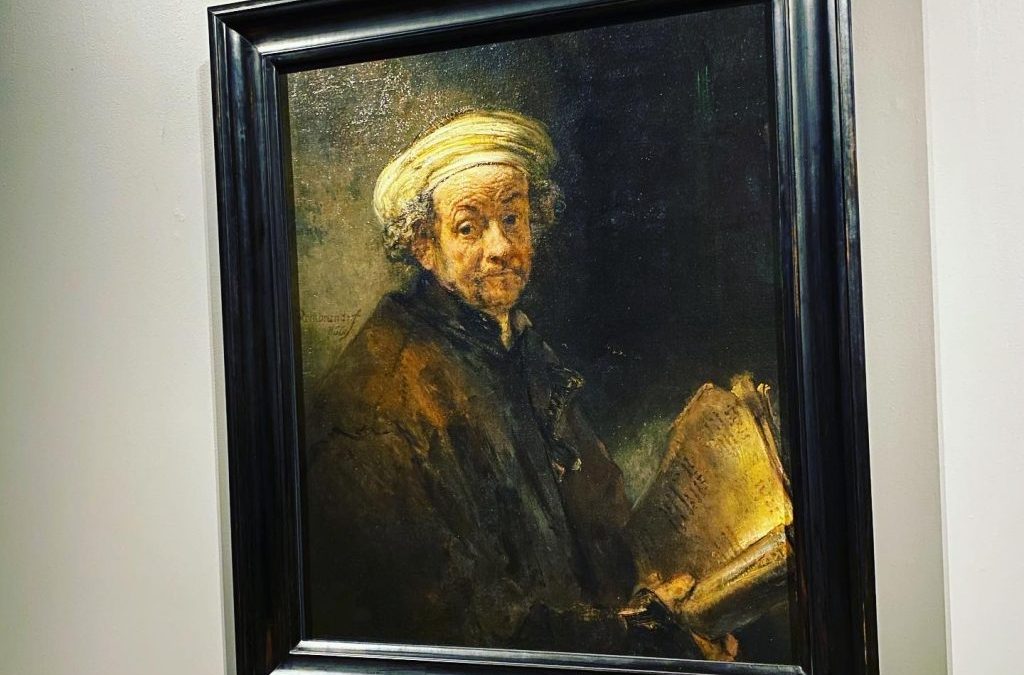 On the 1st March my husband and I went to Palazzo Corsini to see the Rembrandt self-portrait on loan from the Rijksmuseum. In those distant and halcyon days of three weeks ago, there were merely initial cautions about not getting too close to anyone else, and fierce hand-washing was the order of the day (I’ve never had dry hands before, now they’re ageing in front of my eyes. We’re getting through lots of Nivea). The museum was largely empty when we went just after noon – time was already beginning to distort; people were already beginning to stay at home.

Palazzo Corsini is an excellent, and small, museum. Excellent small museums are a splendid breed. The perfect combination for a Sunday wander before lunch. Rembrandt is a favourite (an original choice, I’m sure you’d agree), and M is extremely fond of the Frick self-portrait. We’ve been to the Frick on all three of our visits to New York City (we will, surely, go again? The idea seems quite impossible now, but we will). The extraordinary Rembrandt self-portrait just off Fifth Avenue is from 1658, when Rembrandt was 52 and broke. He had lost his house and printing press, and narrowly avoided bankruptcy. His beloved wife, Saskia, had died sixteen years earlier, and he had seen three of their four children die in early infancy. At the time of this portrait he was in a relationship with his former maid, Hendrickje, with whom he had a daughter, Cornelia. This was the same name given to two of the dead children from his first marriage; the same name, given with hope, to three children. How terribly, unspeakably, sad.

The portrait we went to see on that sunny Sunday morning (well, at noon) three weeks ago (only?) is from 1661, three years later. The artist is depicted with solemnity, and described by the artist as the apostle Paul (a man who failed, and was redeemed). He seems to me to have a look of resignation, but also of stolid determination. He is made up of jowls and wrinkles and bulbous nose. But he also seems surprised, perhaps at the cards he has been dealt, or at how he has played them. Perhaps I’m imagining it, but his eyes seem to me not without amusement. The regal costume, though topped with a jaunty artist’s beret, of the Frick portrait has been entirely abandoned in favour of a much more muted costume.

This was the year after he, Hendrickje, and his surviving son Titus set up a false company (with Rembrandt as an employee) to side-step his legal and financial embarrassments. The same year as this portrait, “the company” (or rather Rembrandt) was contracted to paint for the new town hall of Amsterdam. The painting, of which only part survives (now in Stockholm), shows the conspiracy of Claudius Civilis: the one-eyed Germanic tribal leader described by Tacitus who rebelled against the Romans. The painting was rejected. Eight years later he died, Hendrijcke and Titus had by then both predeceased him, and he was buried a pauper in an unmarked grave in the Westerkerk.

Looking him in the eye before wondering where to go for lunch on a sunny Sunday in the not-so-distant past, Rembrandt unflinchingly held our gaze. I too, was here – he said – and I too had fun, and feelings, and worried about all sorts of things. And that’s why I love portraits: they transcend time. They’re just about being human.