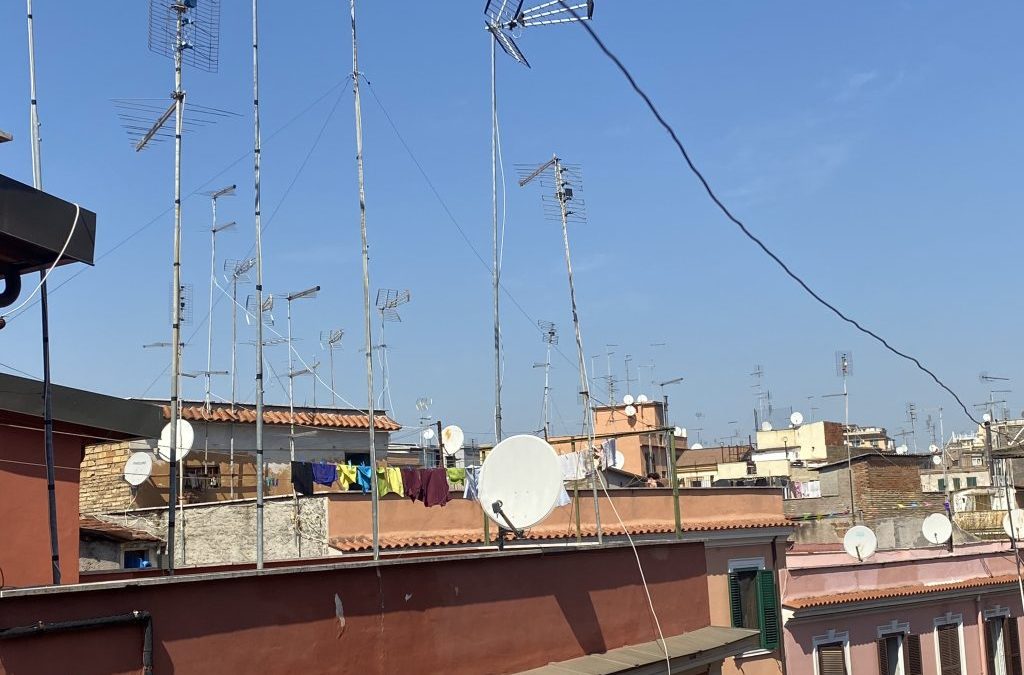 This morning I woke with a sinking feeling in my stomach. To be honest I have done most days since the enormity of this whole thing became apparent. I expect most of us have. In my case it doesn’t usually last long, but there is undoubtedly a momentary lurch of claustrophobia. This is not so much for the enclosed space: I have never been so grateful for our terrace; our extremely nice neighbours (an excellent mix of welcome occasional convivial chats, and each getting on with things in our own little bubbles); being on the top floor of a low-rise building on a little street surrounded by other low-rise buildings. This last means we’ve got lots of sky above and around us––that feels more and more important––and a wide landscape of rooftops, satellite dishes, and forests of (presumably largely defunct) television aerials. The slight claustrophobia is not so much spatial as temporal, the open-endedness of the situation seems, perversely, to press inwards.

As I write this, two weeks almost to the minute after the Italian preliminary lockdown-lite began, Boris Johnson has announced exactly the same (pretty much to the letter) measures are being taken in the UK (here those measures have been subsequently tightened further). To be honest, I’m relieved, the previous “see how it goes” attitude was absolutely terrifying in its callous disregard for human life.

Without intending to blithely suggest superficial solutions to anxiety in these anxious times (I have thought much in these days about those with mental health issues, to whom I can only offer my kindest thoughts), here are some things I have found which so far help me to repel the shadows cast when a cloud of doom begins its approach. Most of them are silly distractions, but they help me feel a little more in control of at least part of my life and include:

-the first, and for me fundamental, thing is this: don’t listen to/watch the news all day. It’s overwhelming and sad, and it doesn’t help anyone. I know that many people here in Italy are glued to the 6pm bulletin with the day’s statistics. I did this too for the first couple of days. Then I stopped. I neither need nor want to know numbers right away. It doesn’t change anything at all if I do or not; any measures to reduce contagion take a while to kick in, numbers go up and up before they can even begin to go down. If you’re in a place where control measures are only beginning to be implemented there is a circa two week period (the incubation period, plus time to register any symptoms) before the exponential tends towards a linear growth (which still gives terrifying numbers, but is a distinct improvement). Today in Italy growth of new cases came down to single figures (8%) for the first time since the crisis. Ideally one would avoid all statistics and news for two weeks, by which point they begin to be encouraging. Obviously that’s not really possible.

-try not take your temperature repeatedly without reason, I did it probably ten times last week. I’ve never done anything like this before.

-this really good presentation by my friend Nick Robinson, which I mentioned the other day.

-I like long baths listening to radio programmes/audiobooks/podcasts with nothing whatsoever to do with this. Recently I’ve found the BBC Radio 4 show presented by everyone’s favourite Scouse communist, Alexei Sayle, does the trick.

-the endless repotting and ordering of my terrace. Why is this taking so long? you might ask. The answers would be two: a) it was horrendously neglected and the repository for all sorts of junk, b) when I’ve finished my next task is to organise my desk and that is a truly terrifying prospect.

-writing this blog. Focusing on mostly nice things to tell the ether and looking at nice photos is, well, nice.

Yesterday I saw an episode in which she goes with a date to see a Lenny Bruce show. (They go to a show, and then to a diner for something to eat, and they’re surrounded by people, and everyone is just going about like this is normal. Which somehow seems crazy, but also comforting. We too will once again wander around busy places and go and have something eat on a whim). Anyway Lenny Bruce tells a joke which involves the then Archbishop of New York, Cardinal Francis Spellman. It’s quite rude and very funny and I’ve forgotten it already. But it did remind me of one of my favourite absurd Rome facts, which happens to involve Cardinal Spellman.

He was the titular cardinal of the ancient church of Sts John and Paul on the Caelian Hill. Built incorporating Roman houses within its foundations, part of the Temple of Claudius under its bell tower, and dating back to the late fourth century, its exterior has a timeless eternal quality. Inside, however, the decor includes quite the last thing one would expect to find in an early Christian basilica. It has the most extraordinary crystal chandeliers, so bizarre they’re just wonderful. Imagine if Miss Haversham did bling, but in a church founded in the fourth century and you’ve got the idea. And do you know where they came from? They came from the Waldorf Astoria. This ancient church is dripping with hand-me-down crystal chandeliers from the Waldorf Astoria donated by Cardinal Spellman. I think Lenny Bruce would have found something amusing to say about that.