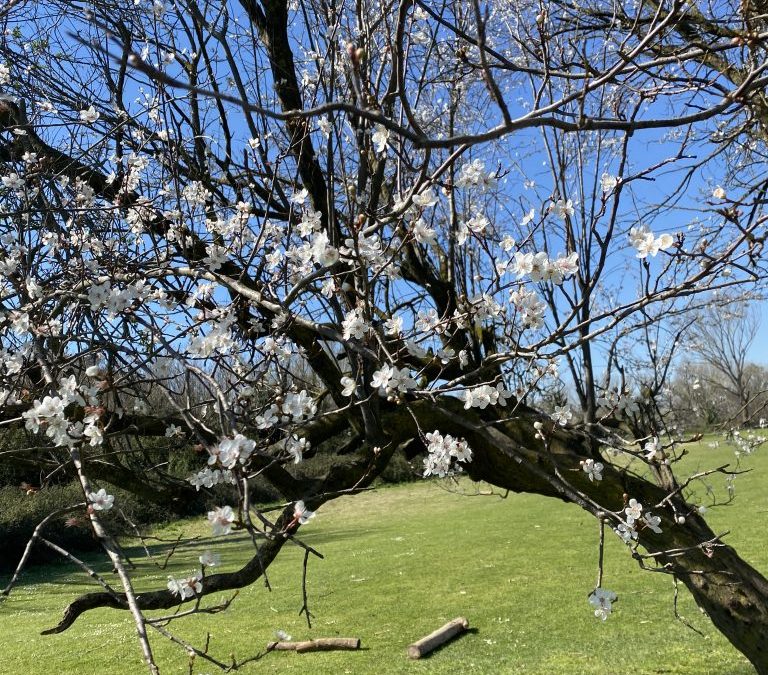 For the moment at least, solo exercise in public parks is permitted as long as the minimum metre distance between people is maintained. Happily Rome has an abundance of amazing parks. Today I took myself off for a solo trot around the Parco della Caffarella (it would be a little much to call it a run…). In other circumstances it would have been a perfect spring day, 19C, a slight breeze, blue skies, the first blossom. It just occurred to me to wonder what time I went and had to look at a photo on my phone to check. I had no idea. Time has lost all meaning, which is a curious state to be in: simultaneously liberating and a little alarming. As far as it matters, it turned out I had gone at 12.30.

The Parco della Caffarella is one of my favourites, part of the Parco Regionale dell’Appia Antica (Regional Park of the Ancient Appian Way) it is the most exquisite and bucolic mix of ancient ruins and Cold Comfort Farm. Where else can you see grazing sheep a five-minute walk from the nearest metro station? Obviously public transport is probably best avoided at the moment, but when normal circumstances resume–oh, but when?–it’s easy-peasy to visit from the centre of town.

Cows, sheep, and hens. Abandoned mausolea repurposed as churches, themselves also long since abandoned. A second century nymphaeum (a sort of decorative fountain for the blingiest of ancient country villas, designed to encourage the mystical activities of woodland spirits) which is legendarily said to have been the grotto of a water nymph called Egeria, counsel (and more, according to Juvenal and other impertinent Roman writers) of Rome’s mythical second king, Numa Pompilio.

In the distance looms the long-dormant (please stay that way!) volcanic system where Rome’s local origin story began with the birth of Romulus.

Because I am nothing if not eclectic, I jogged through the atmospheric backdrop of the Campagna Romana, pervaded as it is by history and legend, to the sound of 90s Country on Spotify: Egeria, meet Brookes and Dunn. I idly wondered how well most of these country singers would respond to the official public ordinance to stay at home, to give up on meals out and aperitivi, on skiing trips and holidays, movies and concerts, on football matches and non-food shopping trips, on weekends out of town taken on a whim.

So far (and though in Rome it’s only just begun, in the towns where the first outbreak was recorded these restrictions have been in place for three weeks), Italy seems to have reacted with general obedience and good humour. The understanding is that we’ve all just got to help each other out, and hope we can go back to normal soon. The decree which ordered the quarantine is entitled “Io Resto a Casa” (I’m staying at home, the hashtag #iorestoacasa is all over social media). It’s very clever: a gentle and kind affirmation, lightening what is after all a fairly authoritarian move, and giving the sense that Italians (and foreigners living here, like me) are doing their bit, not being ordered around. Ultimately that’s what it is: being ordered about for the good of us all, and I’m totally in agreement. But I’m not sure how well Alan Jackson would take that.

Today I also had a piece published on these curious, amorphous days at Apollo Magazine.