Volcanoes and Saints: The Aeolian Islands

Just off the north-east coast of Sicily tectonic plates are engaged in a ruckus. In its inexorable journey towards Europe, the African continental shelf is forced beneath the Eurasian plate. The resultant cluster of islands, a bubbling effusion of the skirmish beneath, is an archipelago named by the Greeks for Aeolus, god of the winds. One of the islands, they believed, was home to the forge of Hephestus, god of fire. Subsequently the Romans would claim the island as the forge of their god, Vulcan. It would give its name to every fire-spewing mountain. 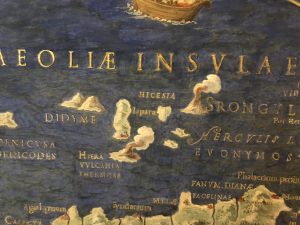 The Aeolian Islands. Detail. Gallery of the Maps, Vatican Museums 1583.

A liminal and evocative world of volcanoes and gods, of fire and brimstone; on the cusp of the earthly and of the underworld. To be tamed. The feast of Vulcanalia celebrated by the Romans on 23 August sought to placate the god, to protect the granaries housing the new harvest from burning in the heat of high summer. In Rome, his most ancient shrine was in the Forum, at the foot of the Capitoline Hill, and was said to have been founded by Titus Tatius, king of the Sabines and co-ruler of Romulus. 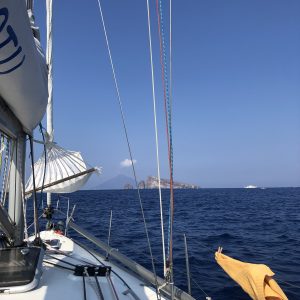 Sailing towards Stromboli on Timbactu. August 2019.

This year the feast of the ancient Vulcanalia found me sailing around these islands on a boat belonging to friends (I highly recommend friends with sailing boats). The landscape is breathtaking and varied—here benevolently verdant, here aggressively lunar— and more than occasionally disquieting. 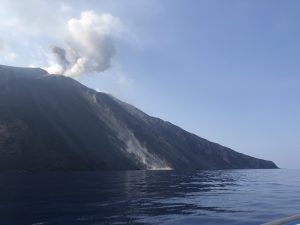 We counted shooting stars, swam in unfathomably deep and impossibly blue sea, ate fish and capers and cannoli, drank crisp Malvasia, and towards midnight on the 24th August positioned ourselves among hundreds of boats bobbing above the un-anchorable depths of Lipari harbour on the occasion of the feast of the patron of the island, the apostle St Bartholomew.

Dinghies and fishing vessels, sailing boats and oligarchic super yachts and, next to us, a pleasure boat offering an evening on the water (complete with lights and music borrowed wholesale, and without irony, from a 1980s school disco). We all entered into a skilful and respectful dance. The disco continued blithely—Queen blaring from the shonky sound system—as the Archbishop of Lipari appeared in a spotlight on a balcony beneath the castle. Loudspeakers competed with Freddie Mercury to broadcast his blessing of the boats, culminating in an avuncular exhortation to be sensible:

This done, the fireworks began: twenty minutes of the most spectacular I have ever seen, a gesture to Vulcan reflected in the calm sea; an atavistic appeasement of the primordial brawl beneath the earth’s crust. 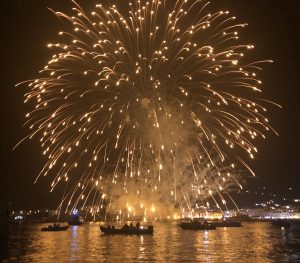 Fireworks in Lipari harbour for the feast of St Bartholomew. 24 August, 2019.