The Baker’s Tomb at Porta Maggiore

In front of the Porta Maggiore, of which I wrote in my last post, is the tomb of an Augustan era bread magnate. Built about 30 BCE, on the cusp of Republic and Empire, it predates the aqueduct (of which the Porta Maggiore is part) by eighty years. The master baker who built it was called Eurysaces, an indication of familial origins in the Greek-speaking East, and a suggestion that either he or his ancestors were freed slaves. Whatever the nature of his humble origins, his monument is anything but; rather it is the advertisement of a fortune made. 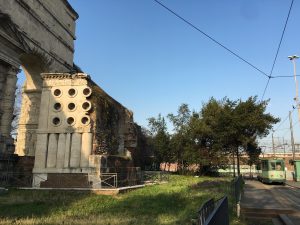 The tomb of Eurysaces at Porta Maggiore

Eurysaces’ tomb was built at a moment in which the city and her ever growing territories must have felt invincible. Some four centuries later the situation was altogether other: as Rome bowed before the inevitable and imminent onslaught of the four horsemen of the Apocalypse, the construction of a fortified tower used Eurysaces’ memorial for its base. It was only in the nineteenth century that Pope Gregory XVI’s archeological enthusiasm would see this tower dismantled to reveal the tomb beneath.

It is a curious structure, its original trapezoidal form determined by its position on an awkwardly shaped, but undoubtedly prime, piece of afterlife real estate. Wedged between the vie Labicana and Praenestina it guaranteed maximum exposure to passing traffic. Thus maximum memory of the deceased was guaranteed, fundamental to the Roman concept of the hereafter. 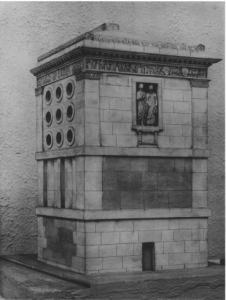 A theorised reconstruction of the tomb, including the now missing main facade (on the opposite side to the Porta Maggiore)

The surviving section retains its travertine cladding, revealing at the jagged edge an infinitely less glamorous interior: a brick skin filled with concrete and rubble. Vertical travertine cylinders are embedded in the lower sections of the three surviving facades. Above these, circular openings give the impression of the same cylinders laid horizontally. These forms, strikingly modern in their stark solidity, are usually thought to be stylised renditions of the grain measures which were the tools of Eurysaces’ trade.

Repeated on the three extant sides, a partial inscription survives between the two levels of vertical and horizontal cylinders:

The “contractor” part (redemptoris) indicates how Eurysaces had been able to build a monument of this grandeur on such a desirable piece of land: his contract was with the nascent Empire. He was presumably involved in supplying bread to the Army, a lucrative business.

A pilaster with a simplified, flattened, Composite capital highlights the corner, and helps to support a frieze in which detailed carvings show bakers practising their trade. We see millstones turned by asses (just like the stones we can still see today at Ostia Antica); shirtless workers put bread in an oven which looks remarkably like a modern pizza oven; baskets of loaves are being weighed (presumably an advertisement for Eurysaces’ honest business practice).

The bread making process depicted in part of the frieze. On the left the bread is shovelled into an oven. (Apologies for the desperately poor quality of the picture, it’s a zoom from my phone)

When the late Imperial tower subsequently built on top of the tomb was removed in the nineteenth century, it was with the characteristic speed and gung-ho enthusiasm of the era. Although Eurysaces’ monument undoubtedly benefitted from this project, there was an inevitable element of “throwing the baby out with the bathwater”. Among the resulting rubble was found a double portrait (carved in marble, a more valuable and resilient material than the travertine used in the rest of the facing) which we can assume depicts Eurysaces and his wife, Atistia. Today the carving languishes in the stores of the outpost of the Capitoline Museums at the Centrale Montemartini where it is is awaiting restoration (some details and a photo can be found here).

This relief presumably adorned the main facade (seen in the reconstruction above), which faced away from Rome and would have advertised Eurysaces’ wealth to visitors arriving in the city. An inscription was also found (now visible in Room IV of the National Roman Museum at the Baths of Diocletian:

“Atistia was my wife. She lived as an excellent woman, whose surviving remains are in this bread basket”.

The “panario” referred to is assumed to be a basket shaped urn also found in the vicinity. Sadly this is also not visible at present, but is in the stores of the National Roman Museum at the Baths of Diocletian.

As no further funerary epigraph was found in the area, it would appear that we are being told that the tomb commonly referred to as the Tomb of Eurysaces was, in fact, built for his wife. However, we are left in no doubt that it is a monument to his achievements, not hers.

The inscription is framed by curious pilasters which look rather like the legs of a table, or (if it is not too fanciful) a madia (a piece of furniture specific to bread making). The epigraph is also intriguing for its linguistic idiosyncrasies: mihei, veixsit, quoius are all odd; quod is used instead of quae; opituma rather than optuma. This is something upon which I am profoundly ill-equipped to further comment, but it is curious.

The tomb of Eurysaces (and Atistia!) is an intriguing fusion of the erudite architectural language of the Greek world (the pilaster with its capital, the presence of a decorative frieze) and a particularly Roman, and enormously appealing, down-to-earth practicality (the literal documentary nature of the frieze, the use of the grain measuring form). It is also a reminder of the great social mobility of the Roman world in the Augustan era, and a document of the processes of baking.

I find this incomparably helpful in our attempts to remind ourselves that the Romans weren’t only conquering generals and tyrannical emperors, they were also butchers, and bakers, and candlestick makers. The tomb of Eurysaces is a monument to Rome’s large merchant class, their hands often dusty with flour.

A visit to the tomb can be included in my Roads and Water itinerary.