Astrolabes and Armour: The Studiolo of Federico da Montefeltro at Urbino 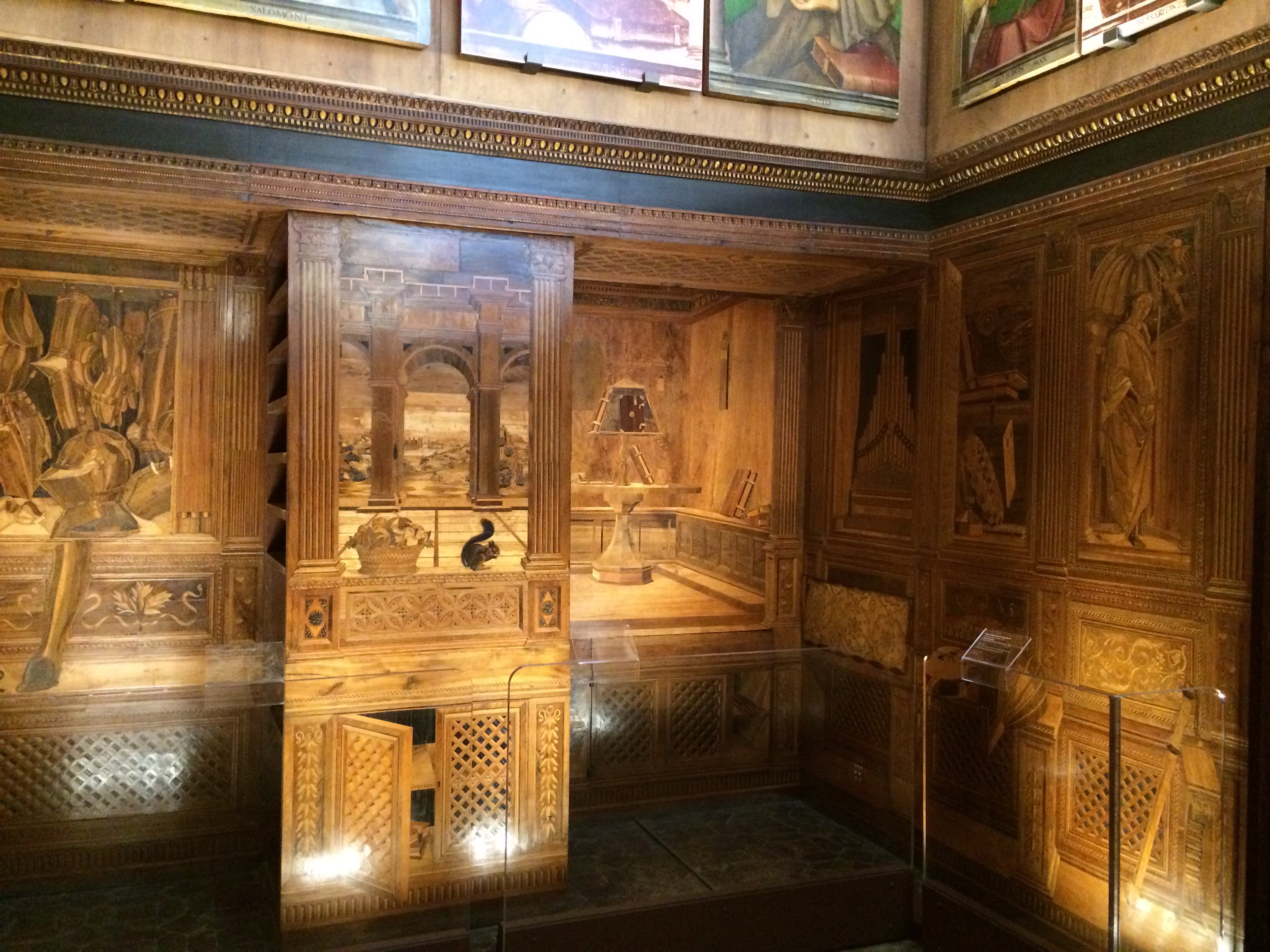 At the heart of Federico’s Palace at Urbino, of which I spoke in my last post, was his studiolo, a tiny inner sanctum for study and reflection, and a place which served to advertise his erudition to visitors.

Created by 1476, its lower level is clad entirely in elaborately detailed wood inlay while above hang 28 portraits of Illustrious Men (14 of the originals are here, the others are reproduced in sepia). Moses and Solomon rub shoulders with Aristotle and Plato, with Dante and Petrarch. Contemporary figures are also represented: Federico’s tutor Vittorino da Feltre is paired with Euclid, Pope Sixtus IV with Saint Albert the Great. 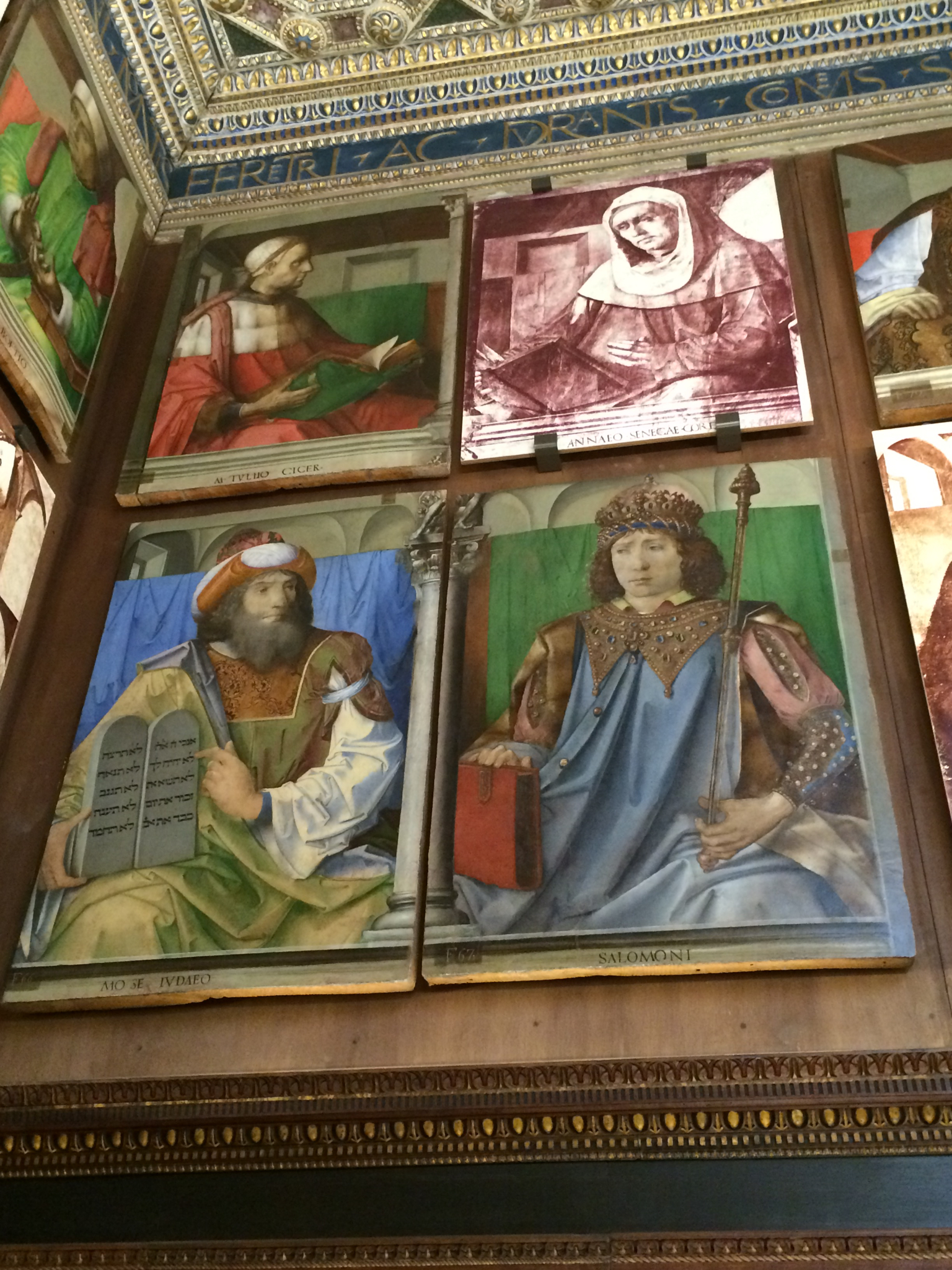 Four of the Uomini Illustri. Clockwise from top left: Cicero, Seneca, Solomon, Moses. Justus of Ghent and Pedro Berruguete. The sepia image is a copy, the original is in the Louvre.

The wooden intarsia, which employs over forty different types of wood and was the work of Benedetto di Maiano and his workshop, depicts an assortment of cupboards, left open in a studiedly casual manner to reveal their contents. Books, musical scores, and mathematical instruments jostle with weaponry. Federico advertises his military prowess and intellectual pursuits in an amusing manner which is itself an expression of his aesthetic credentials: he is au fait with the new techniques of linear perspective; in his unusual choice of materials for his study he is not following trends but setting them. 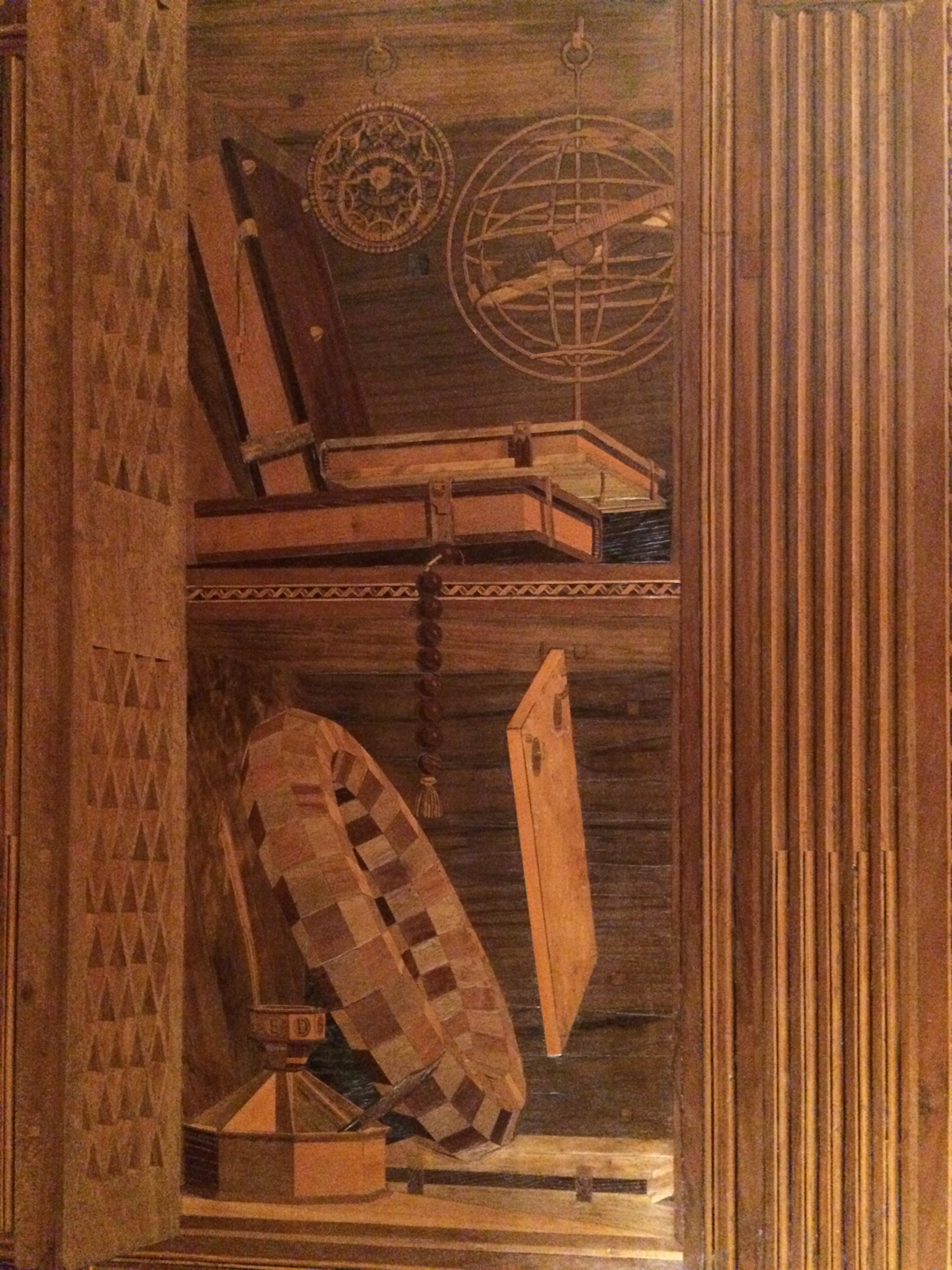 Detail depicting, amongst other things, an inkpot, an astrolabe, and a rosary.

His status is alluded to by the inclusion of the Order of the Garter, England’s highest chivalric order, awarded to Federico by King Edward IV. Next to it a scroll bears an inscription modified from Virgil, “through virtue, one shall reach the stars”, below which hangs a sword. 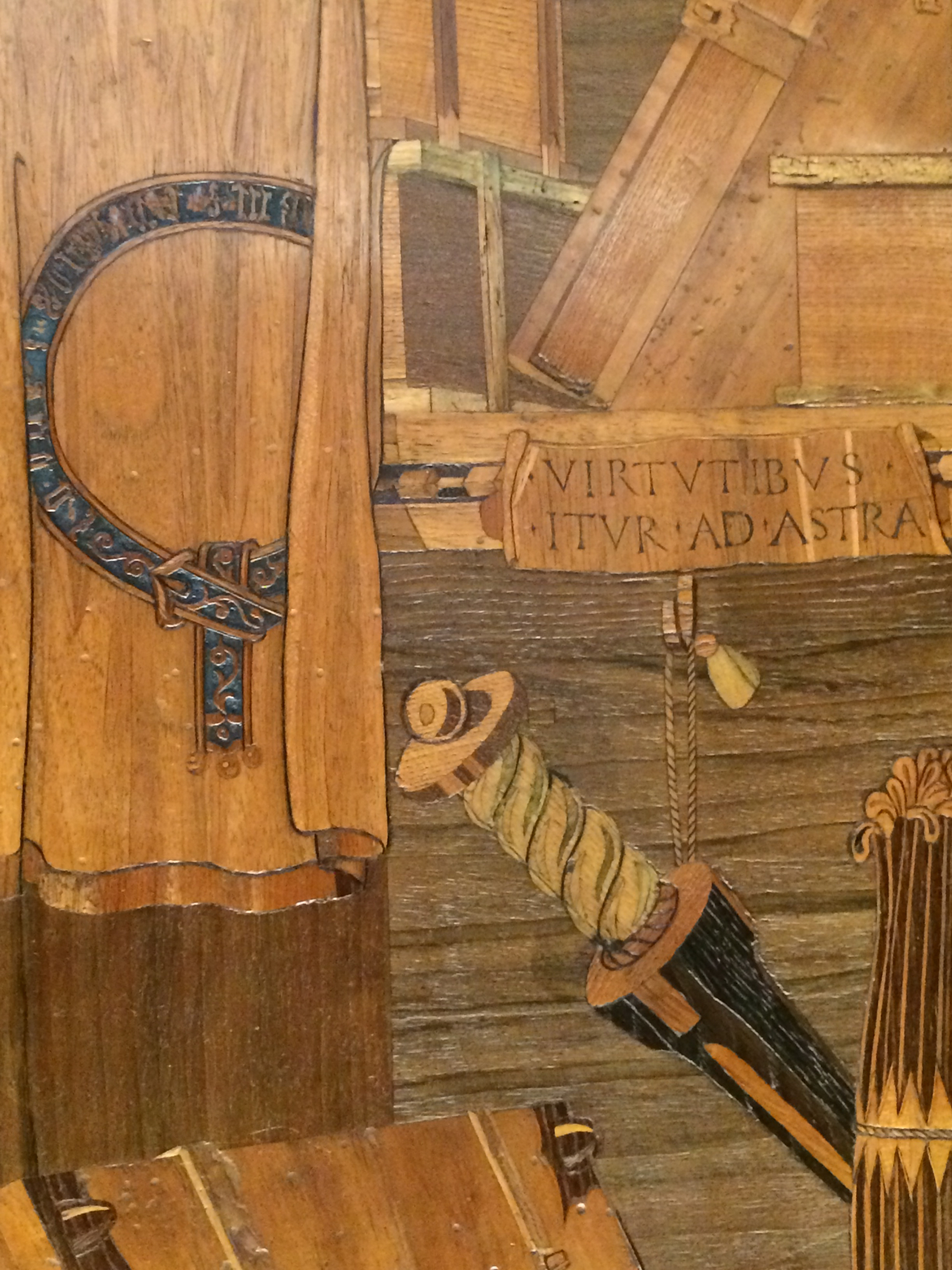 Detail with Order of the Garter, scroll, and sword. 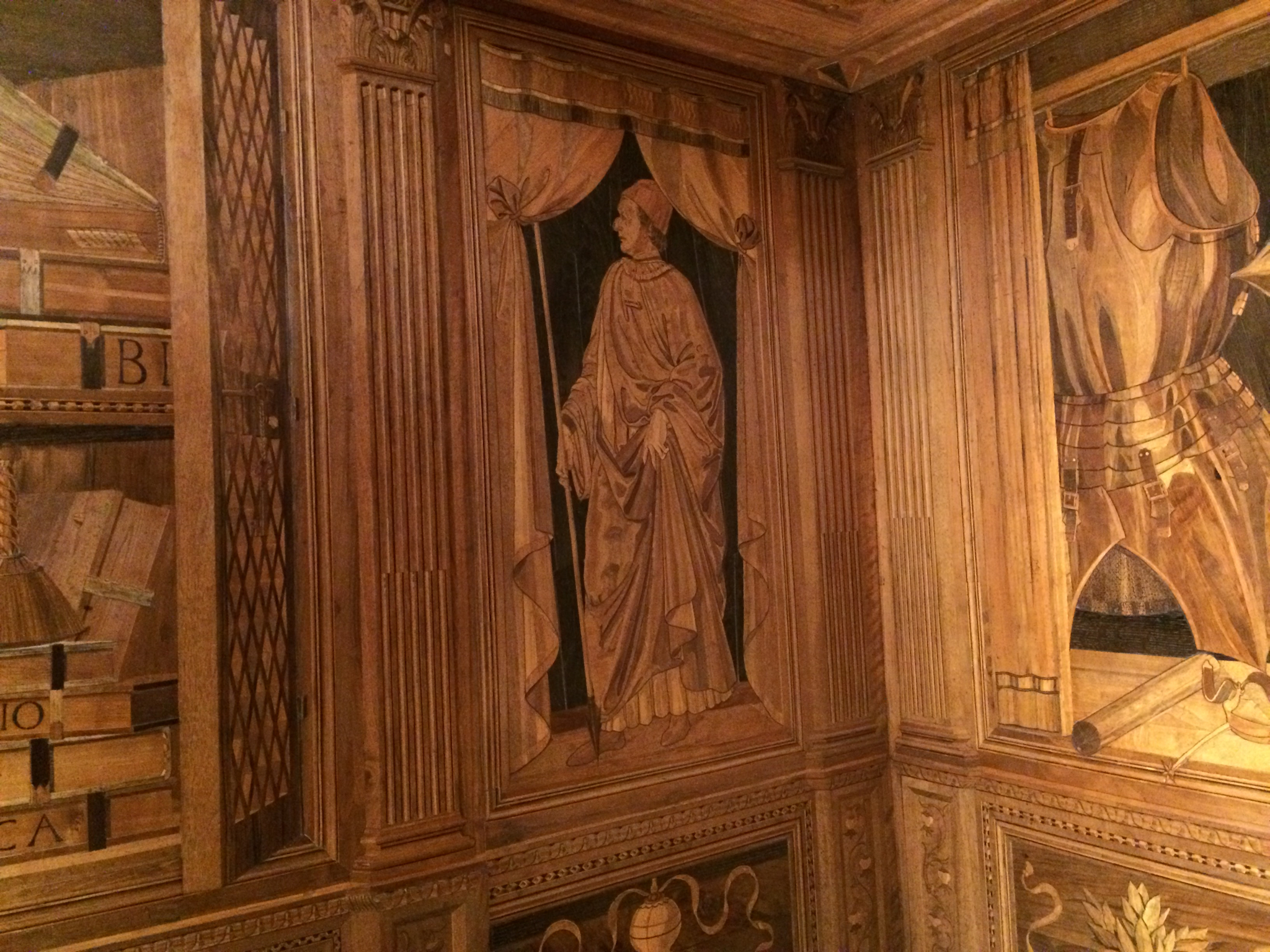 Federico himself is also shown, wearing a toga and in profile, his armour cast aside on a neighbouring shelf as though he has just returned from battle. 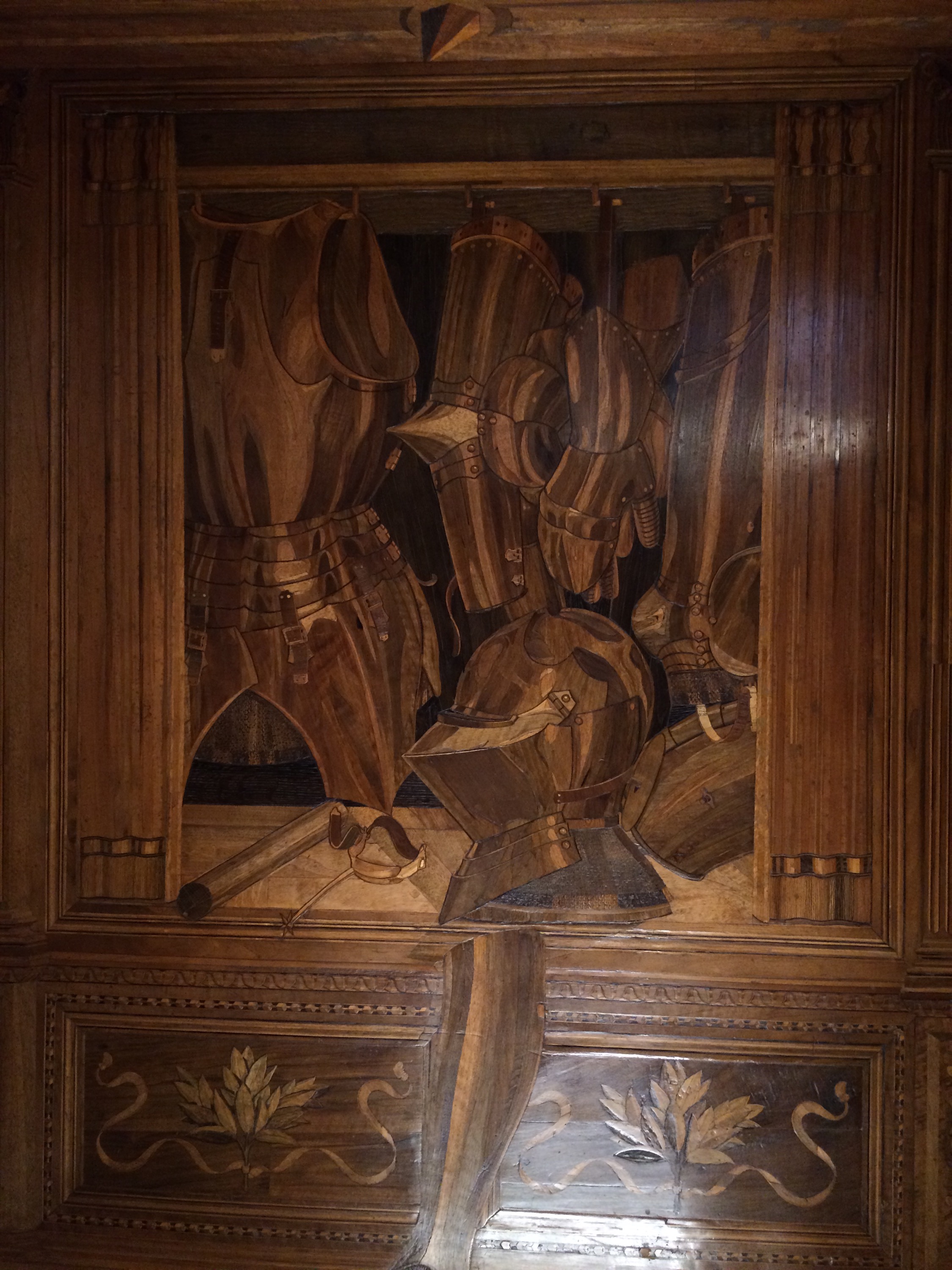 To the right a squirrel gnaws a nut on a faux loggia, through which we view the rolling landscape of the Marche.

If you are closer to New York City than Urbino, a similar room was made for the Ducal Palace at Gubbio. This was purchased, transported across the Atlantic, and reassembled at the Metropolitan Museum of Art in 1939.