Palazzo Massimo alle Terme: the stoicism of the Hellenistic Boxer 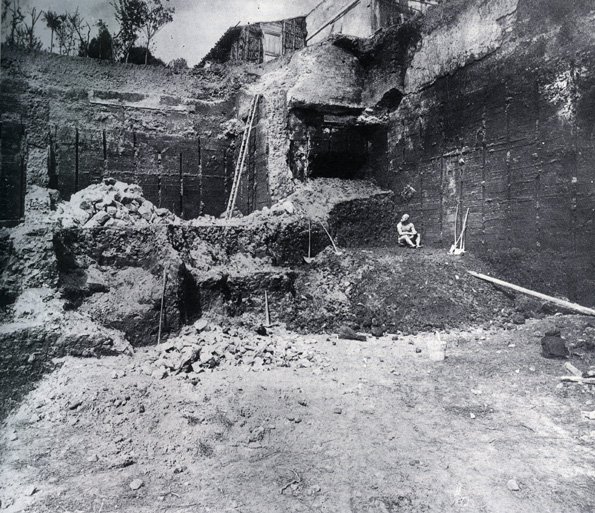 Right by Rome’s Termini central station is one of my favourite museums of ancient Roman art, Palazzo Massimo alle Terme (home to these spectacular Roman frescoes). Palazzo Massimo is part of the National Roman Museum which has four locations (can a museum have branches?) which are all super, and the 10 euro entrance ticket gives you access to all of them over a three day period so it’s also jolly good value.

One of the museum’s too often overlooked superstars recently returned from a trip to the Metropolitan Museum in New York where he was received with great pomp. But you can usually have him all to yourself, a long forgotten hero in Room 7.

The Boxer at the site of his excavation, 1885

The Boxer was found in 1885 as large sections of the Quirinal Hill were being cleared to make way for the building boom of the new capital city. As entire neighbourhoods were being built to house the ministries, and the mandarins, which were the cogs in the new machines of state, archeological work was hurried. But as areas of the former Baths of Constantine were being cleared the extraordinary figure revealed himself to have been sitting, patiently, under the rubble and mud and filth of centuries.

The archeologist who was responsible for saving so much of what might have otherwise been lost in the rush to build the new capital, Rodolfo Lanciani, was present at the excavation:

“I have witnessed, in my long career in the active field of archeology, many discoveries; I have experienced surprise after surprise; I have sometimes and most unexpectedly met with real masterpieces; but I have never felt such an extraordinary impression as the one created by the sight of this magnificent specimen of a semi-barbaric athlete, coming slowly out of the ground, as if awakening from a long repose after his gallant fights.”

This glorious 1st century BC bronze is one of the most poignant sculptures I can think of in Rome. At first we see a muscular figure seated in apparent relaxation, his hands bound indicating that he is a boxer. But look closer and his head, turned towards something we cannot see, tells us this is no triumphant athlete. His cheek is split and his head is bleeding from very recent wounds, superimposed upon older injuries, the details engraved and picked out in applied copper.

His nose has been broken and re-broken, and his misshapen ears bear the signs of multiple fights. This is no generic exaltation of athleticism but an extraordinary psychological study of an ageing boxer nearing the end of his career, as we see him called back into the ring once again.