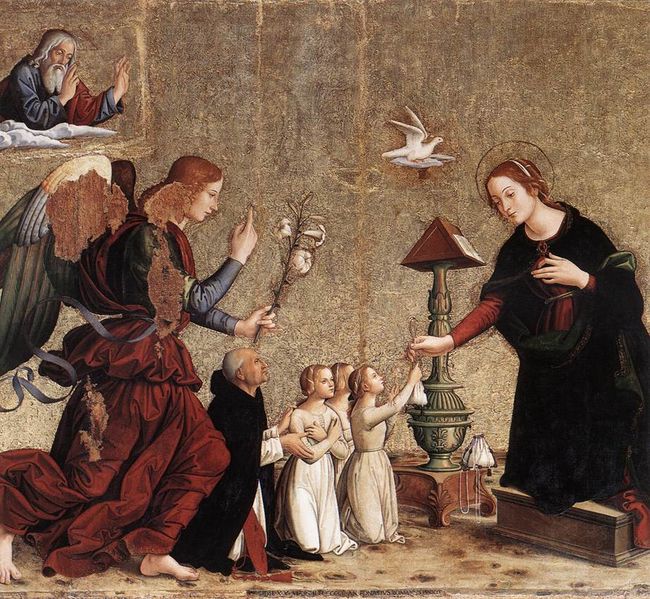 I’ve always been rather fond of Antoniazzo Romano (1430/5-1510), a Rome-born mid-fifteenth century artist who bound the developments of Florentine painting to the medieval traditions of religious art, creating an inimitably Roman style.

He rose to prominence with a number of ecclesiastical commissions, and was given the job of painting the funerary chapel of the fearsomely learned Cardinal Bessarion in 1464, about which I wrote this.

That said, he remained an artist forever to be found in my peripheral vision. A name which cropped up often but which I never got round to investigating further.

So the exhibition Pictor Urbis (painter of Rome) at the fabulous Palazzo Barberini was a super opportunity to fill in some of those gaps. Well displayed and logically laid out with useful information (both in English and Italian), I can thoroughly recommend it.

My favourite piece is, I’m afraid, the most obvious. It is a scene of the Annunciation, and indeed the great masterpiece which marked the end of Antoniazzo’s productive career.

The altarpiece is usually found in the church of Santa Maria sopra Minerva behind the Pantheon (home to my favourite short-cut). At Santa Maria one may be able to see it for free, but nevertheless it merits the price of the exhibition; at the church it lurks behind a gate in the (atmospheric) shadows of a gloomy chapel, but is here displayed in all of its glowing glory, and one can get very close indeed.

The painting was commissioned by the Confraternity of Annunziata (the Virgin of the Annunciation) in honour of the memory of the founder of the “maritagio”, Cardinal Juan de Torquemada (d.1468). This was a dowry given by the institution on behalf of orphaned girls that they might be married off to men who chose them from an annual procession.

We see the Virgin both at the moment of the Annunciation and in the process of handing the jewelled bags of coins – the “maritagio” – to three girls who are presented by Cardinal Juan de Torquemada.

The use of the gold ground and the scaling of the figures to indicate their relative importance hark back to an archaic medieval tradition. However this is belied by delicacy in the features of the Virgin, the angel, and the girls, and the veracity in the features of the Cardinal. The three quarter angle of the reading stand, in front of which the Virgin’s arm passes, and the dynamic folds in the robes of Gabriel are clear indications of the digestion in Antoniazzo’s work of the painting of Benozzo Gozzoli, Beato Angelico, and his onetime collaborator at the Bessarion Chapel, Melozzo da Forlì.

Indeed the juxtaposition of a formal realism against the gold ground serves to make the figures even more immediate. This is the culmination of an often overlooked career in fifteenth century Rome, one of a home-grown painter who absorbed Florentine, Sienese, and even Flemish influences, melding them into a language which he spoke with the heavy solidity of a Roman accent.

Exhibition only 8 euros, exhibition plus the permanent collection 10 euros