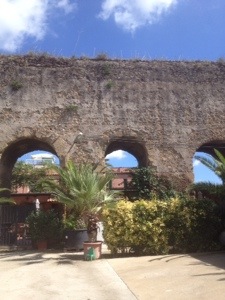 A stone’s throw from where I live, on the other side of the railway tracks, is a road I will happily take a detour to drive along. Grubby and pavementless it makes for an awkward walk, but on a Vespa is a dream. Via del Mandrione runs along a stretch of the Aqua Felice, the acqueduct built by Pope Sixtus V in 1587 reusing the surviving arches of two ancient aqueducts, the Aqua Marcia and Aqua Claudia.

As recently as the 1960s, the arches were incorporated into slum dwellings, before being torn down and their residents provided with modern housing. But along the melancholy road, traces of coloured plaster and tiles still cling to the ancient masonry.

The majesty of Roman engineering collides violently with the grim reality of difficult day to day living; Piranesi comes face to face with Pasolini.