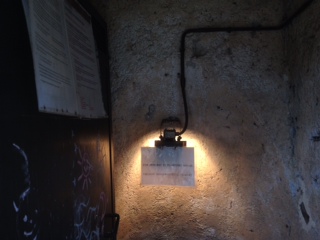 I’ve mentioned (here and here) my fondness for clambering improbable staircases to view long bricked-in frescoes. Just as good, if not better, is making an appointment through the city heritage office to meet a key-bearing guard in an unlikely looking spot. One of these sublimely doubtful gates leads down a flight of stairs to the Columbarium of Pomponio Hylas. A columbarium (literally a “dovecote”) was a common, usually semi-underground, structure built to house multiple niches where funerary urns could be placed. Built either by a private builder or by a professional corporation for its members they were, if you will, a sort of condominium of death. Less grand than a single-property mausoleum, but nevertheless expressing a certain social status, the proliferation of colombaria bears testament to the burgeoning middle class in the early Empire.

Inscription referring to Pomponio Hylas and his wife.

Within the shadow of the Aurelian walls, the Columbarium of Pomponio Hylas was discovered in 1831 in excitingly good condition. It takes its name from the beautiful mosaic inscription which is the first thing one sees as one descends the (original) staircase. Framed with shells it tells us that this was the tomb of Cn[aieus] Pomponius Hylas and his wife Pomponia Cn[aieus]. The last part of the inscription L[ibertae] Vitalinis tells us they were the freed slaves of Vitalinis, a reminder of the social mobility of the Roman world. Above Pomponia’s name the letter “V” suggests she was still alive when the inscription was made, and below two griffins are shown on either side of a lyre.

The dominance of this inscription has led the colombarium to be named for Pomponio Hylas, however it was not made for him. Rather, his memorial is part of a second phase of building which saw the addition of tombs during the Flavian dynasty of the late 1st century. As one descends the stairs the first phase of building, excavated into the friable tufa, is visible on the right. The niche holds the tomb of Granius Nestor and his wife Vimileia Hedone.

The earliest tombs, including those of Granius Nestor and Vimileia Hedone are visible in the niche on the right, the pedimented structure on the left is part of the later additions.

Other inscriptions which were found in the earliest part of the colombarium include reference to a certain Celadius, freed slave of the Emperor Tiberius, and Paezusa, formerly ornatrix (hairdresser) of Octavia, the first wife of Nero. These inscriptions place this first phase to the post-Augustan Julio-Claudian dynasty (14-68).

Tomb of Granius Nestor and Vimileia Hedone, with some urns intact.

The couple are shown in paintings on either side of the niche with a curious large urn (kiste) between them which suggests them to be members of some sort of undetermined religious cult.

Granius Nestor and the “kiste”

Above the ceiling is elegantly painted with floral decorations, even including a grasshopper.

Towards the end of the 1st century Pomponio Hylas and company came along, shamelessly destroying obstructing tombs to add in their own.

Their colourfully painted columns are of a type which were clearly known to Filippino Lippi, and those which frame his glorious Annunciation at the Cappella Carafa of Santa Maria sopra Minerva might have been copied from these, as can be seen in the photos below.

Of course Filippino Lippi never visited this columbarium; indeed were it to have been exposed to the elements in the 15th century its glorious (and entirely original) colours would certainly not be in such good condition today. However his emulation serves to remind us that in this decoration we can see echoes of the architectural fashions set by much grander buildings: indeed the use of shells and mosaics in Pomponio Hylas’ inscription recalls the monumental fountain of Nero’s palace at Anzio. In the Columbarium of Pomponio Hylas we can see a snapshot of a new Imperial bourgeoisie made up of self-made men who proudly proclaim their social evolution from the slave classes with tombs at the cutting edge of design.

Entrance is by appointment only. The site could be incorporated upon request, and where site availibility permits, in my Roads and Water itinerary.

Park of the Scipios