Heavens Above: A few thoughts about ceilings 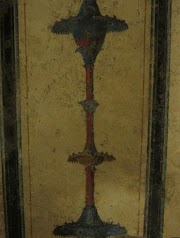 Recently I’ve been thinking about ceilings. Elaborately painted ones to be precise. A couple of weeks ago I took a group of 41 seventeen-year-old girls from the James Allen’s Girls’ School, plus their teachers, to see two of them. In the morning we visited the Vatican Museums, home to the most famous ceiling of them all. We talked about how the painted framework designed by Michelangelo to “hold” all of the various scenes and figures in place pointed to the confidence, both intellectual and political, which characterized the reign of Michelangelo’s patron, Pope Julius II. The central scenes of the creation are obediently enclosed within their frames; man, the ceiling tells us, can get his head around the infinite, here the very beginning of time is under control, obedient within the confines imposed upon it by the human imagination.

Five years, to the day, after Michelangelo climbed down from his scaffolding for the last time, the event upon which the girls’ A-level History course rests took place; on 31st October of 1517 in Wittenberg, a disgruntled Martin Luther set the wheels of the Protestant Reformation in motion. The Roman Church, eventually, saw the threat this breakaway movement posed, and the Council of Trent convened in 1545 with the task of defending the supremacy of the Roman Church.

The art of the Church, the Council determined, was to be reined in as the handmaiden of religion; decoration for decoration’s sake was out. But less than ten years after the Council’s long meetings concluded, things began looking up. Victories over Turks and Protestants were fought, and gold was flooding in from the New World; this new optimism was reflected in art. Any residual defensiveness was lost, and the Roman Catholic Church came out to meet the 17th century with all guns blazing. The Baroque was born. As wildly un-Protestant as possible, art was the tool through which the Roman Church illustrated its strength. Theatrical and dramatic, it was the perfect medium through which to advertise the Church’s renewed emphasis on miracles and visions, on the transcendental, on that which was beyond comprehension.

Art was to wow the faithful, enveloping them within a dizzying spiritual experience to which they were to surrender. And with their representations of the heavens, ceiling decorations lent themselves perfectly.

So after a well-deserved lunch-break we took the metro and trotted along to Palazzo Barberini. Almost always empty, it struck me as an agreeable spot to spend an hour or so, a pleasant foil to the crowds of the Vatican. Built by Pope Urban VIII, it houses a super collection (including a Holbein Henry VIII which fitted in with our theme). Its main salone has a fabulous ceiling painted by Pietro da Cortona. Furthermore, the gallery has thoughtfully placed couches in the main salone from which to admire Pietro da Cortona’s work which I thought would go down well. I remember only too well that being seventeen was an exhausting business.

In rich allegorical detail the ceiling outlines the “Divine Providence” that led to the election of Maffeo Barberini as Pope Urban VIII in 1623. It details the glorious prosperity, abundance, and peace which his reign brought upon the Papal States. It’s a great piece of PR.

The Triumph of Divine Providence, ceiling of the Salone of Palazzo Barberini. Pietro da Cortona

In the centre three vast bees, the crest of the Barberini family (adapted by Urban when he was still a cardinal from the rather less glamorous horseflies which had represented the family since time immemorial) are topped by the vast papal tiara and the keys of Peter. But rather than detailing every aspect of the allegories shown, sometimes less is more, I encouraged the girls to look at the overall effect, in particular the way the architectural framework worked.

If at the Sistine Chapel, Michelangelo’s framework was obediently respected, here it exists but is ignored by the figures which inhabit it. The scenes merge one into the other, and the heavenly realm above bursts out over the painted cornicing. The force of the heavens cannot be contained by mere matter. The Baroque, we decided, was about going over the edges.