Seeing new things; it’s all in the detail – the apse mosaics by Pietro Cavallini at Santa Maria in Trastevere 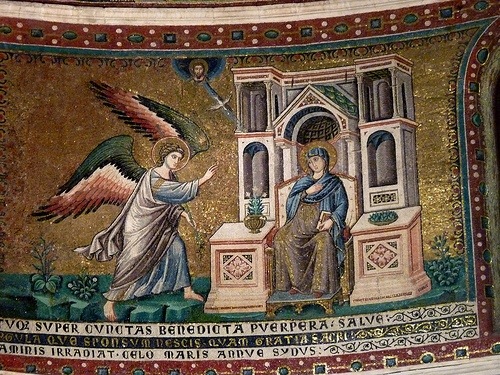 I usually like to take advantage of this quieter time of year by exploring Rome. And there’s no shortage of things to look at. As they say around these parts, “Roma, nun basta ‘na vita”: a lifetime isn’t enough. Familiar places can be looked at from different angles, and with a longer respiro, to yield new depths. New and less familiar sites can excite and astonish from behind an innocuous façade one has passed by a thousand times, enriching the infinite “whys” and “hows” which make my own understanding of Rome an never ending project.

It was in this spirit that I joined a group of similarly-minded guides who had taken the initiative to arrange a series of winter guided tours led by Professor Alessandro Tomei, a medievalist. A medieval focus very much appeals to me, it is the period of Rome’s history most often overlooked; a thousand years too often and too easily dismissed. Whether we speak of the “Middle” or the “Dark” Ages we use a pejorative term. A millennium is defined either by its position in relation to other “greater” moments – it is in the “Middle” of the Empire and the Renaissance, a trough between two great peaks of civilisation – or by the unfair accusation of a “Dark” absence of knowledge.

This week’s trip was to Trastevere, firstly to Santa Cecilia where we focussed particularly on these frescoes by the fabulous Pietro Cavallini.

We then continued the Cavallini theme at Santa Maria in Trastevere where, thanks to Professor Tomei’s erudition, I saw something quite new in mosaics I have admired since university.

In the scene of the Annunciation in the apse the Virgin is seated in a sort of throne-building. For over decade I have shown visitors the church, and used this structure to illustrate Cavallini’s precocious use of perspective. A few years before Giotto is credited with the “rediscovery” of perspective in the frescoes of the Scrovegni Chapel, Cavallini was employing it in mosaic, an altogether more unwieldy medium.
But I had never noticed what Professor Tomei pointed out yesterday, and which can be seen in the detail below: just as the Virgin is sitting at a three-quarter angle, so the tiny cross-vaults in the niches on either side of her are also at a three-quarter angle.

A sophisticated structural detail manipulated from nuanced coloured tiles seven centuries ago and all but imperceptible in the gloaming of the church took my breath away, and surely serves as a clear reminder that those “Middle” Ages were anything but “Dark”.