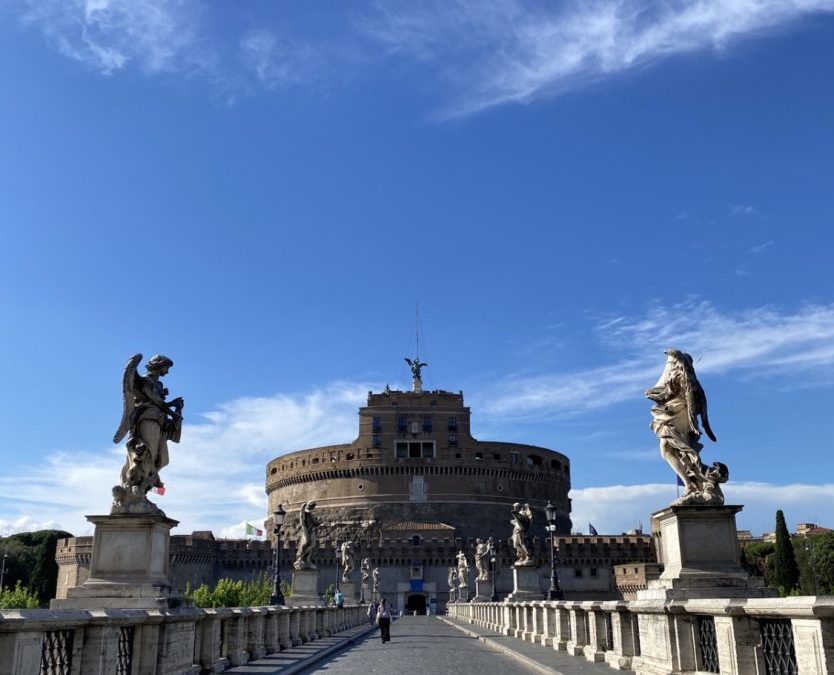 This week’s Zoom talk is about medieval fortresses, so I took myself for a spin around the biggest of Rome’s castles, the Castel Sant’Angelo to take some photos. After a night of thunderstorms, and lowering skies this morning, the afternoon was glorious. The sun shone, and a most welcome breeze sent benevolently fluffy clouds scudding across a particularly big sky.

I parked on the opposite side of the river and crossed the Pons Aelius – as was – known for the last millennium and more as the Ponte Sant’Angelo. The original name recalls Hadrian, who planned this as his mausoleum. As the Empire crumbled a couple of centuries after Hadrian’s successful reign the grand mausoleum became a fortress: a readymade look out point on the river close to the ever more important sacred area of St Peter’s Basilica.

The “new” name of both the bridge and castle comes from an event which is particularly pertinent in these curious and worrying times. As plague tore through Rome in 590, the worldly Pope Gregory – later known as “the Great” – was elected. He had been prefect of the city before entering monastic orders, and had also served as an apocrisarius, a sort of ambassador from Rome to Byzantium.

Processions with chanting to calm divine wrath were common to Constantinople, a city consecrated to the protection of Theotokos, the Mother of God. Perhaps it was from there that he borrowed the idea, and in April 590 seven processions were organised to make their way through the city, all arriving at Santa Maria Maggiore. A legend said as he passed the mausoleum of Hadrian he saw a vision of the Archangel Michael sheathe his sword above the monument, a sign that the plague would abate. It did, and so it became the Castel Sant’ Angelo.

The icon which tradition says was carried by Pope Gregory is the Salus Populi Romani, still at Santa Maria Maggiore. During the current public health emergency Pope Francis prayed before it twice: once in situ on the 7th day of the national quarantine; and once twelve days later on a stormy night in the empty Piazza San Pietro with a prayer service followed live on television by 11 million people in Italy.

That was deep in the amorphous days when all of Italy had ground to a halt, not a car nor a motorbike was to be heard, and we knew we were far from having a date when things would begin to change. When a trip to take the rubbish out was a treat; a foray into the outside world justifiable to the police were they to ask. The endlessness hung heavy, an oppressive temporal claustrophobia. It feels like something remembered from a dream. Let’s hope that’s where it stays, and that everyone will soon be able to enjoy the cautious freedom that we’re gingerly experimenting in Rome. There was plenty to think about as I wandered through the Castel Sant’Angelo entirely alone, except for the occasional custodian, on a Monday afternoon in June of the year twenty twenty.