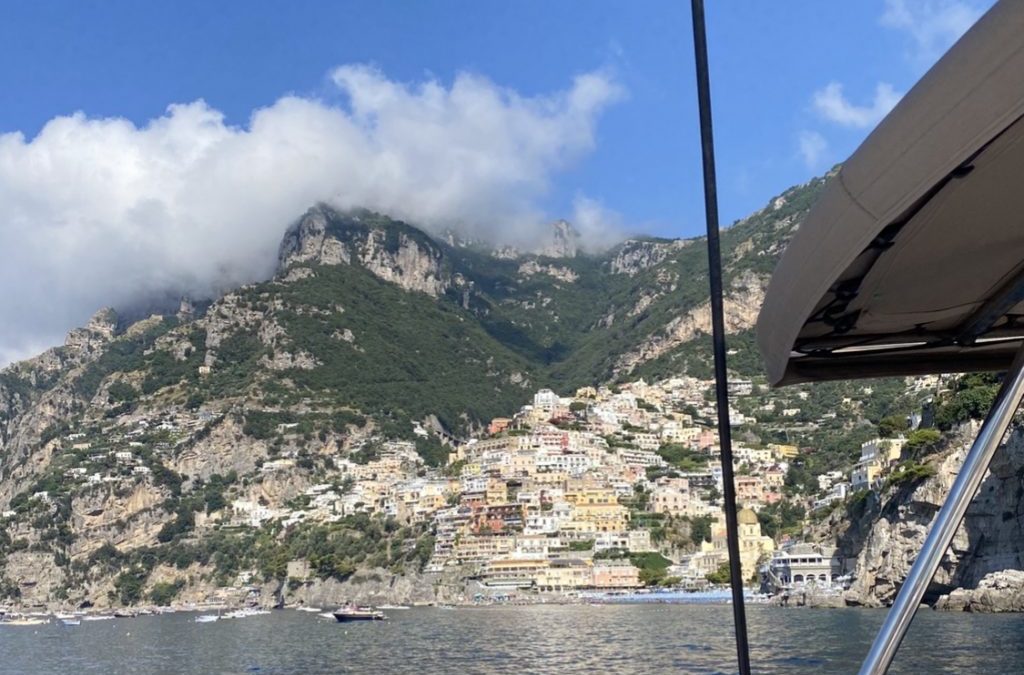 As mentioned in Week 19’s post, last week saw me floating around the Bay of Naples and down the Amalfi coast to Salerno. It was wonderful, places normally jam-packed in July were quiet (though not melancholy or deserted), and glad to see us.

On Thursday evening we anchored the boat (I say “we”: these manoeuvres had nothing at all to do with me) in the Bay of Positano and pootled ashore in the dinghy with its outboard motor. The dinghy was hauled onto the beach (entirely illicit, I’m sure, but it didn’t cause anyone any bother) and we wandered up into the town. By fortunate happenstance we were in time for the last visit to the Museo Archeologico Romano which only opened in 2018 and of which I’d read but (very unprofessionally) had entirely forgotten about.

The major part of the museum is the excavation site below the Church of Santa Maria Assunta: a Roman villa discovered in 2004. It had been first damaged by the earthquake of 62 CE, and then dealt the coup de grace by the eruption of Vesuvius in 79 CE. This provoked a landslide of rock and ash which, aided by rainfall, turned to a sort of naturally-created concrete upon which the church was subsequently built.

The villa is accessed via the crypt of the church, with its medieval putridarium: a battery of funerary chairs carved into the rock where monks were placed after death to speed up the process of decomposition; their liquefying remains draining through holes in the “chairs”.

Below this crypt (now extremely sanitised, happily), is the grand seaside villa, of which only part has been unearthed. Its fractured walls serve as a reminder of the building’s violent end.

It may be that of Posides Claudi Caesaris a gladiator freed by the emperor Claudius. If this is the case, it may be also the source of the town’s name which may derive from “praedium posidetanum” (the property of Posides). That’s quite a lot of “mays”.

What isn’t in doubt is the glorious grandeur of the painted decorations and stucco embellishments revealed by the excavations. Complex interplay of painted architectural spaces, faux curtains, fantastical marine creatures: all bafflingly beautiful and painted in such vibrant colours that we can’t not be reminded once again that the Romans were most certainly not minimalists.