Paradise regained: the painted garden of Livia at Palazzo Massimo 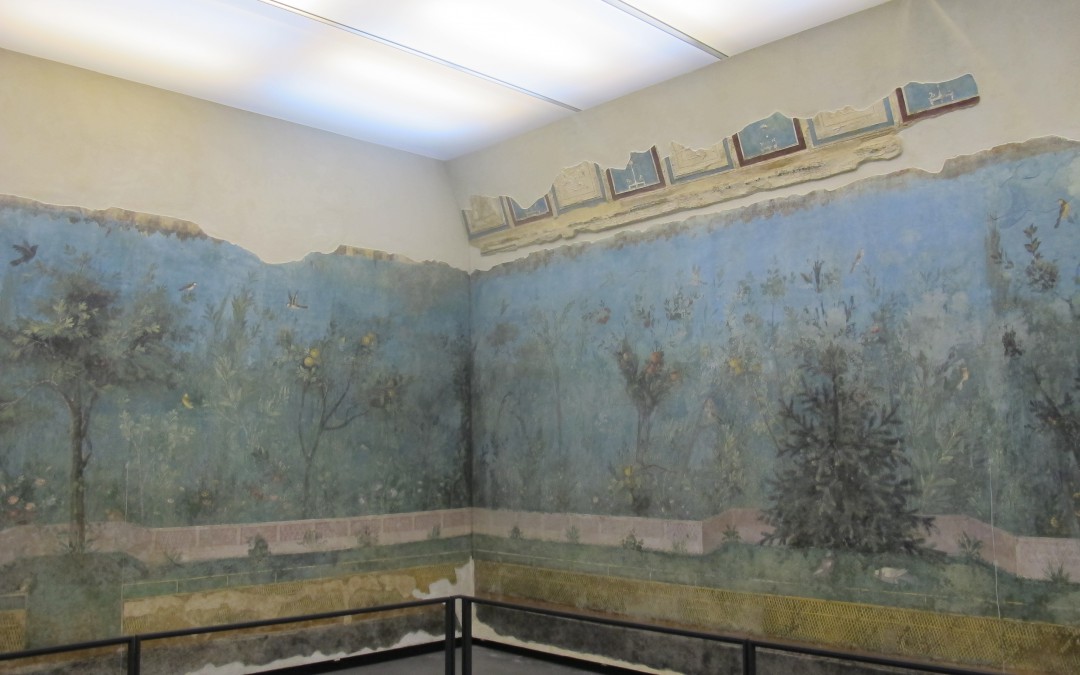 In a city filled with extraordinary works of ancient art, perhaps one of the most breathtaking is one of the least visited and one of my favourites. After visiting the “Monsters” exhibition (excellent, go) at Palazzo Massimo today I went to the top floor to say hello to the dining room of Livia, wife of the Emperor Augustus.

The room was discovered at the Villa of Livia ad gallinas albas (by the white hen) in the area now known as Prima Porta on 30th April of 1863, just ten days after the celebrated statue of Augustus had also been found close by. The existence and location of the villa is well-documented, amongst others by Pliny and Cassius Dio. They tell us that its name came from a white hen which fell, alive, from the clutches of an eagle into Livia’s lap. The hen, it is said, held a branch of laurel in its beak which was planted and grew with such vigour that it would provide the wreaths for the triumphs of generations to come.

The report of the Pontifical Ministry of Public Works (Rome was still, just, under papal control) recorded that a room

“with painted walls in good condition representing fruit trees and flowers with various birds. The ceiling had entirely collapsed and the stucco decoration which once decorated the vault was found among the rubble which filled the room.”

Such was the state of disrepair of the site that in 1951 the drastic decision was taken to detach the frescoes, and in 1998 they found their way to their present collocation in a room built to the dimensions of the original.

Painted c. 30-20 BC, Livia’s triclinium (dining rooms were so called for the couches arranged in groups of three) was partially underground, a common setting for rooms which were to be used in the scorching summer months. Instead of looking out onto the real gardens of the villa, a garden of the imagination was painted on its walls, just beyond a painted perimeter wall.

The scene is a natural impossibility: fruiting pomegranates and quinces jostle with flowering irises and camomile; palms, pines, and oaks flourish while partridges, doves, and goldfinches feast on their fruit and rest on their branches. Only one bird does not fly free, enclosed in a gilded cage resting on the low wall.

The scene is one of timeless and exotic fecundity; each species frozen in its own moment of glory. We are, the painting tells us, ensconced in the perpetual spring of the glorious reign of Augustus.