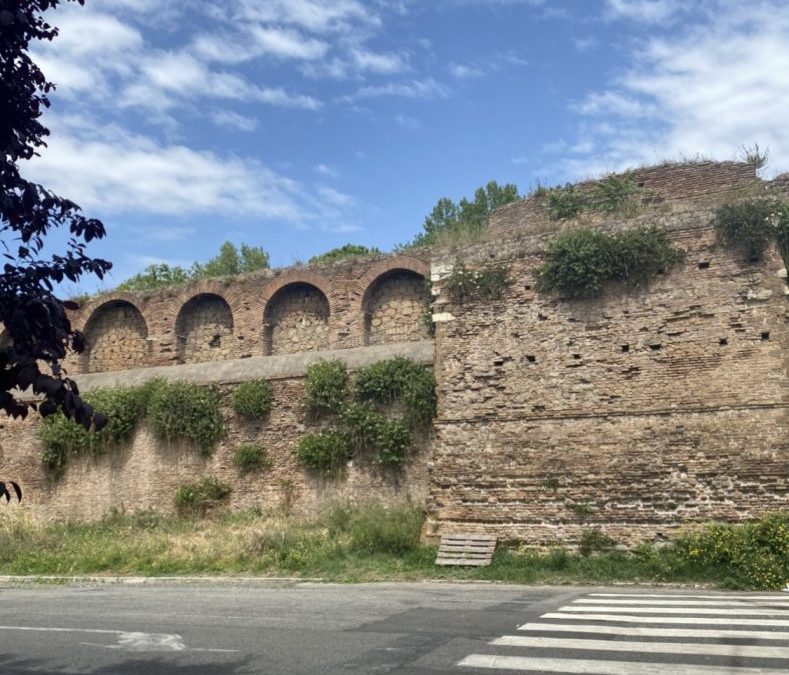 First things first: here’s a quick plug for the online talks I’m doing for the rest of this month. Email me for bookings info at understandingrome dot com.

This morning I took a trot through the Aurelian Walls, where caper flowers are already in flower. The wisteria has been and gone, the capers are in bloom: spring is turning into summer without us noticing.

I passed San Giovanni in Laterano (about which I wrote this on distant Day 5) and the largest standing obelisk in the world.

It was carved fifteen centuries before Christ to stand in front of the temple of Amun, protector of Thebes, at Karnak. When completed it was a monolith thirty-two metres in height, and the tallest obelisk in Egypt.

Constantine’s son, Constantius II, had it moved along the Nile in the early fourth century AD. He intended that it reach Constantinople but it got no further than Alexandria. Some decades later, in 357 and on his only visit to Rome, he took it to the capital of the western Empire. It was erected in the Circus Maximus where it stood until the fall of Empire before succumbing, like so much else, to looting, earthquakes, and gravity. For a millennium it languished in the valley; drainage systems forgotten, it was washed by the floods of the Tiber, and buried by alluvial sand.

In the late sixteenth century, Sixtus V (nemesis of Elizabeth I), commissioned his architect Domenico Fontana to excavate the obelisk, by now in five pieces. He had it re-erected in front of the cathedral of Rome, St John Lateran, and topped it with a cross. The Egyptian tribute to divine power, appropriated by the Romans as a symbol of their conquest of a much more ancient civilisation, would ultimately be used to triumph Christian rule over the city. Pope Sixtus V was very keen on erecting obelisks around Rome. With the know-how of Domenico Fontana, he also positioned the ancient obelisks in front of St Peter’s, behind Santa Maria Maggiore, and at Piazza del Popolo. They too are all topped with crosses: a sort of proto-GPS system for pilgrims.

I carried on down the hill to another monument, requiring no obelisk, did a circuit of it, and then went back home via wild flowers in Trajan’s Baths. The museums and archeological sites may be closed, but the whole city is one big museum.