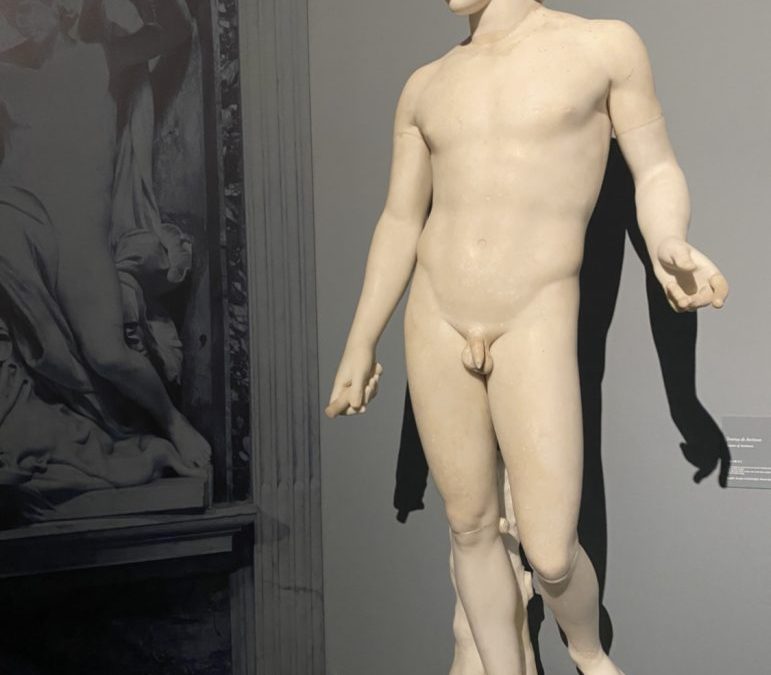 As I’m sure someone very famous has said on a thousand inspirational Facebook quotes, adaptability is all. Whilst there is a light at the end of the tunnel of the current level of full lockdown in Rome (parks reopen on 4 May, some businesses will reopen), when travel will be something people can (or will want to) do is anyone’s guess. So today I tested the waters of a new way of talking to folk about Rome. My brilliantly theologically learned, enthusiastic, and entrepreneurial pal, Jill Alexy, asked me to give a talk about the thwarted Raphael exhibition to a private group of her clients on Zoom.

It’s a big show so I chose to focus on Raphael’s relationship with the Antique, and was able to use the photos I took on my visit on the opening day, little knowing I wouldn’t be back. I mentioned the letter he wrote to Leo X, we saw (photos of) some of the glorious paintings which have been sitting all alone in empty rooms for six and a half weeks, probably the least admiration they’ve had since they were painted. I hope they’re bearing up.

I was more than a little nervous. I have years of experience giving illustrated talks in lecture theatres to delightful student groups, and to groups of adults on in-depth study tours in Rome. Talking to people in a lecture theatre is quite a different beast to walking around sites with clients and I thoroughly enjoy doing it, but the additional possibilities for online technological hitches struck me as innumerable. I needn’t have worried: Jill very kindly dealt with the technology fabulously; I’d been practising, and managed not to touch the wrong button by mistake; our broadband behaved with great decorum; and M was sure to offer encouragement beforehand and then to stay well out of the way.

The last example from the exhibition I used in my talk was the beautiful Antinous Farnese, a second century statue of the young man usually referred to, somewhat euphemistically, as Hadrian’s favourite. It is a very fine example of a portrait type of Antinous, and is on loan from the Archeological Museum in Naples. Next to it is a drawing (on loan from the Royal Collection in London) of Jonah by Raphael. Traditionally the head is said to be based on Raphael’s studies of the Farnese Antinous (which was perhaps in the collection of Pietro Bembo or of Agostino Chigi at the time of Raphael), and the drawing is the basis for Lorenzetti’s sculpture of Jonah for Raphael’s Chapel at Santa Maria del Popolo for Agostino Chigi. Jonah is a prophet of the Resurrection, and ideal for a funerary chapel. From Antinous to Jonah, via Raphael, Agostino Chigi, Naples, and a loan from the Queen. Now that is eclectic.

I shall be giving more talks via Jill’s website, and will be starting some on various themes which I will run myself for groups of no more than twelve. I thought a first idea, given yesterday was Rome’s birthday and in general it’s best to start at the beginning, could be a chat about the foundation of Rome: forty minutes plus a Q & A. How does that sound?

If anyone would like something made to measure, feel free to drop me a line: for fun, for study groups, no job too big or too small as they say! Any requests for ideas for group talks about anything Rome-related at all, or requests to be kept in touch when dates and times are announced, will be gratefully received too (email me for info and prices), and as the phrase goes: watch this space!