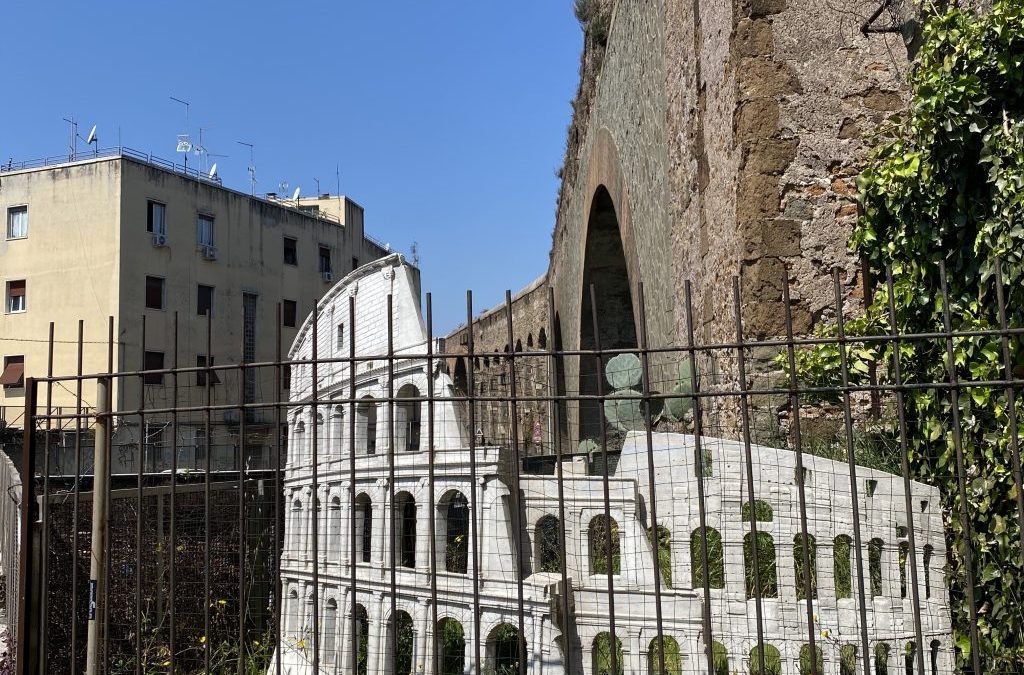 I took another #tinywalk today, along another stretch of a deserted local road pulsing with Neo-Realist vibes. The aqueduct is the same one mentioned in Day 23’s walk, but this time I went in the opposite direction. Wisteria, poppies, and prickly pears; a tangle of railway lines on their way out of Termini Station cutting through ancient arches; the jumble of those places in between places which one usually only glimpses from a train as it gathers speed. I never cease to find this improbable short-cut absurdly exotic. I adore it more than I can say.

A higgledy piggledy collection of classically-themed garden statuary seen through a padlocked gate in a gloriously bathetic setting between the (real) ancient and the (not quite) modern: the head of Michelangelo’s David, an abandoned tyre, the She-wolf, Augustus, a tarpaulin, the Capitoline Venus, the Apollo Belvedere, a palm tree. Across the way a discobolus in a bucolic verdant enclave aiming towards a car park and a railway siding.

A VW Beetle with an ancient Roma number plate and, through the dripping wisteria, a glimpse of the work of our pal and fabulous artist Alice Pasquini on the wall of a long closed-down music venue; her joyous figures an example of heroic resistance, despite the accumulated tags of intervening years. On the deserted street, I had an eerie moment recalling the large gardens behind the rusty gate once heaving with people; the street crammed with parked motorbikes and chatter on torrid summer evenings. Another world, surely?

On my loop back I passed lone pine by a normally busy railway line, and not a train in sight. And over it all, the extraordinary blue of a Roman sky in a spring that is going ahead without us.