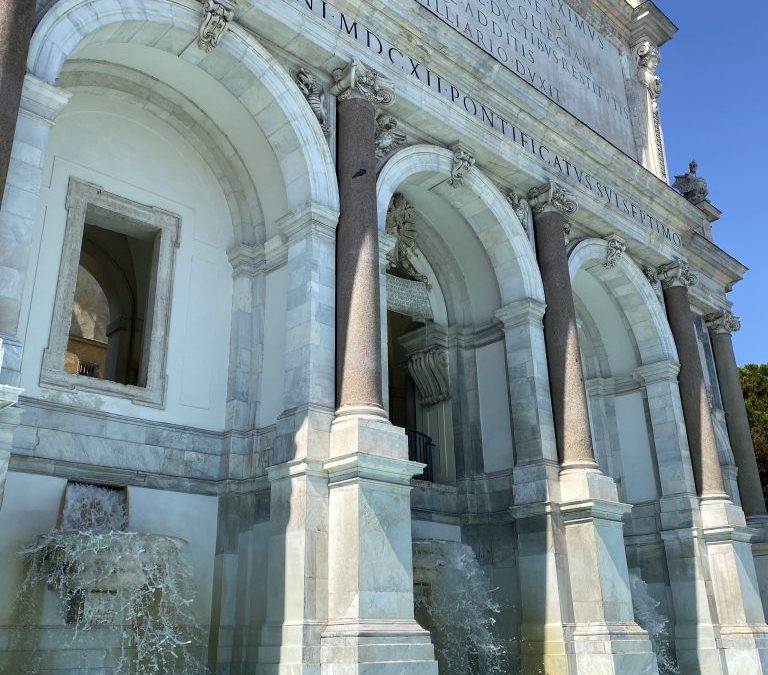 A Field of Mars repeat at 9am CET, and a wander from the Janiculum down through Trastevere at 3.30pm CET. Both last about an hour.

Buoyed by the charming enthusiasm of those who joined my live-streamed walking tour last week, I’m going to be doing a couple more online tours via webinar on Friday 20th November.

The first, at 9am Rome time, will be a reprise of my Field of Mars tour last week, and the timing should suit those of you in Australasia or the Far East who have thus far been left out. (9am in Rome is 7pm in Sydney, 9pm in Auckland, 4pm in HK. In the UK it’s a not unfeasible 8am).

At 3.30pm in Rome (9.30am EST, 8.30am EST, 6.30am PST) the new walk will start at the Fountain of the Aqua Paola on the Janiculum Hill, the grand fountain built by Pope Paul V to show off the abundant waters of the rebuilt and extended ancient aqueduct of Trajan. Romans, who have a penchant for directness, just call it the Fontanone––the big fountain. From there I shall wend my way down the hill and through the charming cobbled streets of Trastevere. The Latin name was Trans Tiberim––across the Tiber––and following Augustus’ significant extension of the pomerium, like the Field of Mars, it was incorporated into the city limits. It became the fourteenth of the fourteen regiones, and the first borough of the ancient city to be situated on the west bank of the Tiber. Among much else it was said to be the site of a miraculous effusion of oil which tradition says foretold the birth of Christ.

Timings are dictated rather by the rapidly shortening days, and for those of you on the Pacific Coast it is a rather ungodly hour I’m afraid. However, unlike my online talks, this is a webinar so your camera won’t be on at all. You could be lounging naked upon rose petals if you like (that’s the sort of thing that happens in California, isn’t it?) and no one would ever be any the wiser. And what better way to wake up than looking at the Fontanone?

Any questions you may have can be asked via the chat function either as we go along or at the end. Both walks last about an hour, and the cost is €25 per computer connection, regardless of how many people are in front of the screen, and picture quality is good enough to watch on a big screen.

I am labouring under the optimistic assumption that we shan’t be locked back in our homes by then (in the case of a forced cancellation it goes without saying there will be an immediate and full refund). In the meantime, as they say, “Roll up, Roll up!”. To book please email info@understandingrome.com