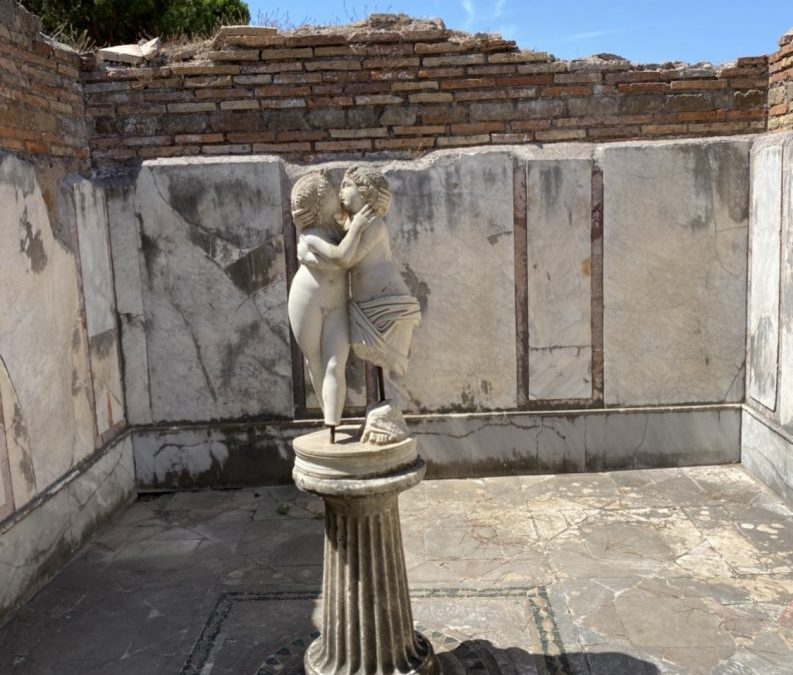 On Friday I went to Ostia Antica to take some photos for this week’s online talk: “Daily Life in the Port of Rome” (if you’d like to join and see times follow the link). I’ve got umpteen photos of the site, some of them quite recent, but where possible I try to keep the talks immediate by taking photographs especially for the occasion. It means the weather is uniform in backgrounds and I can get exactly the angles that work best. Plus it helps concentrate the mind when preparing what I’m going to say.

Friday was one of the hottest days of one of the hottest weeks of the year. I arrived at 9am and it was already 34c and very sticky. I had my temperature measured which is surely the COVID equivalent of removing shoes at the airport: it gives an impression of a sense of control but I’m not sure about you but if I were running a temperature I’m not sure a visit to an archeological site would be top of my list of things to do, and of course asymptomatic carriers are—well––asymptomatic. Entering the ticket office a mask was required, as in all internal public spaces in Italy, and I’m very much in agreement with this: it is the simplest, most highly functional way of limiting the spread of an airborne respiratory virus.

Even with my mask (the elegant work of my cousin-in-law), and despite only a single visit to the site in the last six months, the chap at the desk recognised me right away and handed me my free ticket, a perk for qualified Italian guides at all national museums and archeological sites even without an entourage.

Once inside, I zipped through the site taking pictures of areas both well-known and not. I made it as far as the former sea port, the Porta Marina (now high and dry by the airport motorway, victim to a retreating coastline over the last two millennia). My objective was to take pictures that will be both familiar to people who’ve visited or studied the site already, as well as plenty of areas that people may not have seen before.

In my capacity as a private guide I’ve taken more tours than I can count round the site: from two hour child-friendly heat-beating spins (it’s a brilliant site for children, Caroline Lawrence’s book The Thieves of Ostia is a great introduction complete with a map for added intrepid exploring) to full day in-depth study visits (not in high summer!) and everything in between, I can honestly say I don’t think I’ve ever taken the same route twice.

So I wandered between mosaics and frescoes and opus sectile; between grand houses and humble streets of apartments; bath complexes and ancient snack bars. After three and a half hours and an 8km meandering loop I was ready to melt so hopped in the car and drove to the beach for a swim.