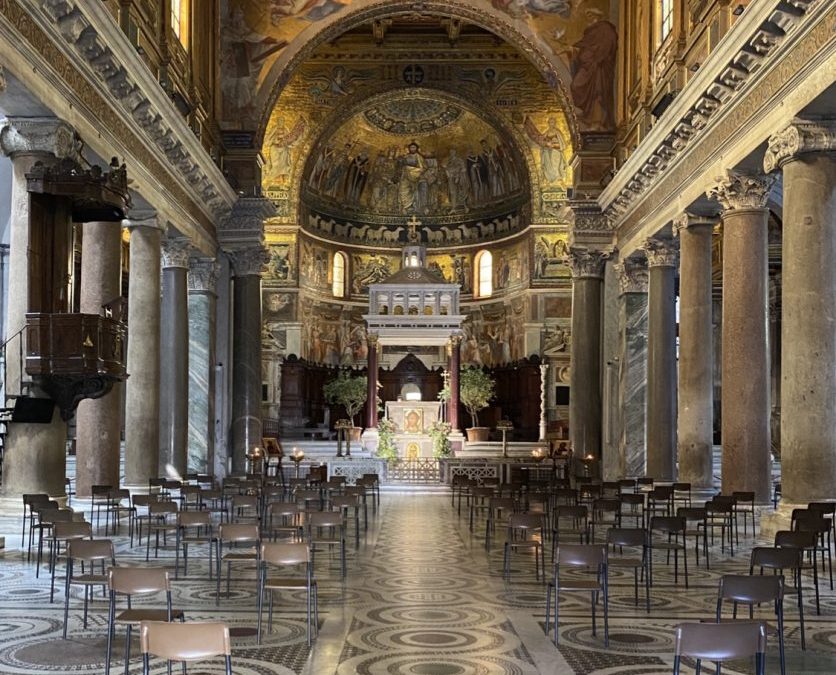 Week 18? I had to double check. Things feel pretty normal in Rome at the moment, which in itself feels ominous: the calm before the storm, or an even keel? I say “normal”: there are still masks, temperature checks, and hand sanitiser everywhere, none of which is “normal”. Then again I remember when you could take shampoo onto a plane in hand luggage without removing your shoes. Or didn’t need to go through a metal detector to enter the Colosseum (three years ago? five?). There was a time when those things weren’t normal either, but now they are and I don’t suppose any of us can imagine it being different.

I first started doing tours in Rome in the distant summer of 2001, just before everything changed. Even after the attacks on the World Trade Center, on Wednesday mornings in 2002 when the pope gave his general audiences in the crowded piazza San Pietro, I used to ride by on my tiny yellow 50cc Piaggio. I just rode around the outside of the colonnade and saw the Pope on my way to work. It wasn’t a big deal, and there were no smartphones or Twitter or Instagram to tell anyone about it. The pope was John Paul II and he’s a saint now. That’s how long ago it was.

My current Zoom talk – for which the final outing is at the Antipodes/Far East/Europe-friendly time of 11am CET tomorrow (Tuesday), some spots still free, email me if interested! – is about Trastevere. Trastevere is a picturesque jumble of cobbled streets, wisteria, crumbling walls, terracotta roofs, medieval churches within which mosaics glitter in the gloaming. It’s also the first area in which I lived in Rome. A flat-share above a laundrette and a trattoria rented in cash (lire: thousands or millions or squillions of confusing lire) from a smooth chain-smoking lawyer who spoke English with an American accent.

I chose Trastevere (unaware, as a blithe 22 year-old of the lack of originality of my idea) because I had been very taken by it on my second visit to the city: a university class trip to Rome a couple of years earlier. The class was “Bramante and High Renaissance Rome”, which I adored (and which has also proven to be of more directly practical use in my employment than anyone could reasonably have ever imagined).

On that trip in Easter of 1998 our tutor, Dr James Lawson – an excellent teacher whose enthusiasm without doubt changed my life – took us to the Vatican Museums and the Villa Farnesina; to the Tempietto and the Villa Giulia; around the churches of the Field of Mars; through the Forum and over the Capitoline Hill. He talked of palimpsest, spolia, and scavenger architecture. I loved it. He even arranged access to Raphael’s thwarted Villa Madama, used on occasion for State banquets and which I’ve not been inside since.

We stayed in what was then a very grubby street near Termini, in a very odd hotel. We were at least six to a room in closely-packed bunkbeds, and I suppose there was a bathroom but I have no recollection of it. We didn’t mind a jot. The trip was, somehow, heavily subsidised for everyone by the University; indeed we were the last cohort in the UK to pay no tuition fees at all. The past is a foreign country; they do things differently there.

Even the centro storico of Rome was still pretty grubby in the late ‘90s. Every second building was being cleaned for the imminent Holy Year of 2000. It was a veritable festival of scaffolding. “Impalcatura” was the word we learned. We giggled at its onomatopoeia. Mi sa dire dov’è la chiesa chiusa in impalcatura we cobbled together: Can you tell me the way to the closed church under scaffolding? And then we giggled a bit more, our studied veneer of worldliness chipping away easily. There was even a bit of scaffolding in the Sistine Chapel as the cleaning neared its conclusion. No matter. It was all wonderful.

One afternoon when Jim had quite rightly turned us loose, we wandered over the river to Trastevere. We diligently hunted down Cavallini and Bernini, and spotted scavenger architecture in the mismatched ancient columns repurposed in churches. (We did as much nocturnal carousing on that trip as one might imagine, but now I think of it were quite charmingly earnest by day. I don’t suppose we slept at all. Oh, to be twenty!). It was that afternoon, and the fact that Trastevere featured in The Brother of the More Famous Jack (if you haven’t read it you should; I’m sure you will love it too), which led me to live in a room on the road of the furriers, above a laundrette and just along from a American-Italian pop star who was always delightful, and of whose vast national fame I was entirely unaware.