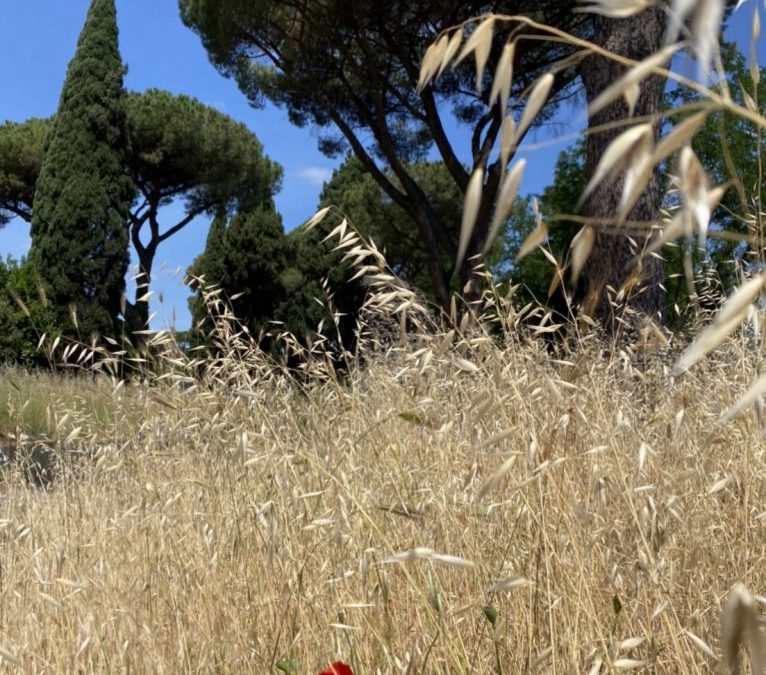 A quick bit of self-promotion: the calendar for my June online talks is now up, please do take a look!

What a difference a week makes! Last Monday all restrictions on movement within the region were lifted, yesterday we went to our local, Pigneto Quarantuno, for lunch. Distanced tables outside only, no more than four people per table, waiters wearing masks, tables fully disinfected between patrons, masks to be worn when going inside. All of that is, at least for customers, not as intrusive as it sounds, and we had an absolutely super time.

This morning I finally got round to taking a proper walk along the Appian Way which I’d been dreaming of during the long weeks of lockdown. It’s part of the vast and wonderful Parco dell’Appia Antica, the largest urban park in Europe and covers 4580 hectares 11300 acres.

I rode my scooter to via Cecilia Metella and set off on foot. It was magical. I passed unruly goats being moved from one field to another, their bells clanging and the air zinging with the scent of fresh mint released as they snacked on the hoof, so to speak. I passed the Villa of the Quintili, once the grandest villa in Rome’s environs which had belonged to the Quintili brothers who were doomed to be executed on trumped up charges of treason by the unstable and despotic emperor Commodus. I wonder what they would have made of the cows lumbering past what remains of the monumental nymphaeum that advertised their vast wealth.

There were flowers: the last of the poppies, thistles, prickly pears. Self seeded wheat swayed and swooshed in the breeze.

I passed the remains of tombs of all shapes and sizes: from vast piles of rubble that would once have been clad in marble and decorated with statues to modest multi-properties colombaria: the condominia of the Roman hereafter.

I crossed Rome’s ring road, which is tunnelled below the Appian Way, and left the city limits. I had a chat with a pensive donkey, and admired hunks of lava from the Alban Hills, the volcano which produced the ridge on which the road is built and provided the stone with which it is paved.

I got as far as a suburban railway station and decided that I would call it a day.

I’d walked 12 km, which I would cover on a normal day of tours at this time of year, but I’m out of practice so I bought a ticket and a delicious can of lemonade at a café with an out of date timetable. I waited on the station’s only platform on the single track line for a train to Termini. It was entirely devoid of any information, an inebriated dot matrix screen erratically displaying times and destinations which offered little reassurance.  Eventually a train arrived, I donned my mask as required and climbed aboard and trundled all the way back into Rome.

Please email me if you’d like to join any of my online talks in June, most are 50 minutes plus questions and cost €15 per person. The next child-friendly talk is on 4 June at 6pm CET and is about Daily Life in Rome and Pompeii. It lasts 30 minutes plus all the questions you can think of. €10 per child, accompanying adults are free.