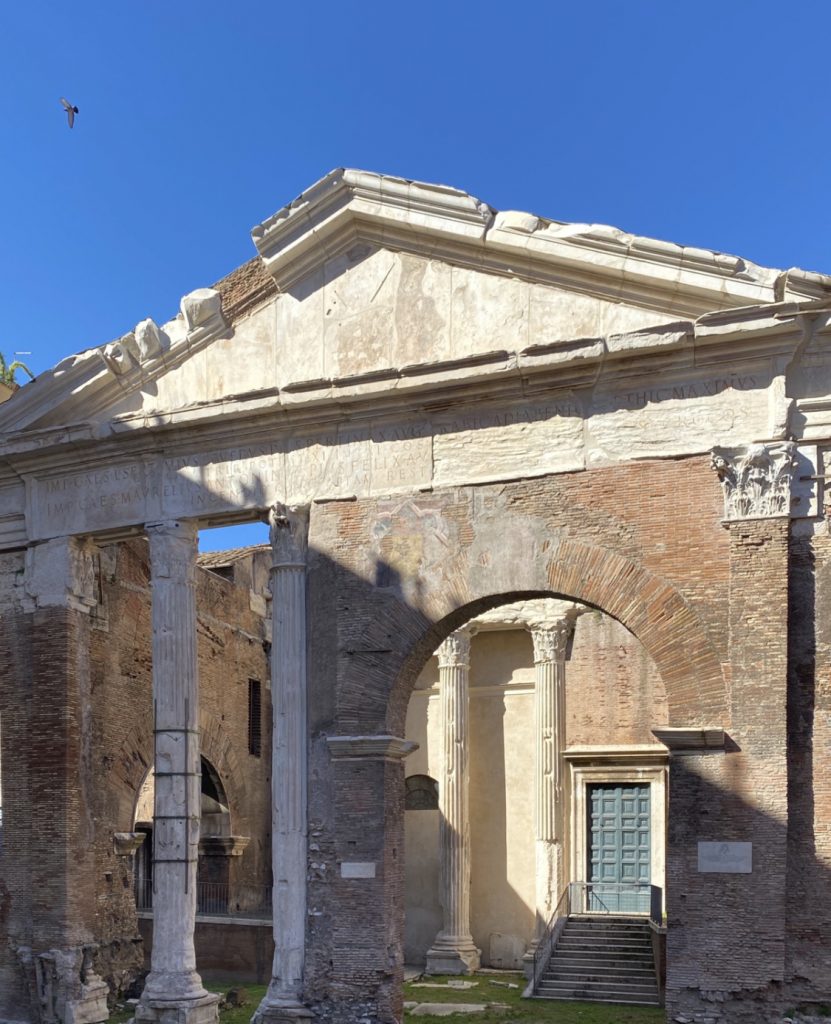 On my epic wander yesterday, I dropped into only one church: Santa Maria in Portico in Campitelli. It was one of very few open in the city, presumably for the protective icon it houses. I went in: in these curious times we need all the help we can get. Also it’s a really lovely church.

The “in Portico” bit of the name comes from the foundation of an earlier church – long demolished – which was absorbed into the parish of Santa Maria in Campitelli in the seventeenth century. The earlier place of worship was dedicated to Santa Galla and stood amid the long lost colonnades of the Augustan Portico of Octavia. This portico was a great courtyard housing libraries and temples of which all that really remains is one pedimented entrance, which survives because it also was incorporated into a church: Sant’Angelo in Pescheria (the holy angel in the fish market). From a portico of libraries and temples to a fish market; the names of Rome’s churches tell the vicissitudes of the city’s fortunes.

The church in the Portico was, it is believed, built to house a twenty-five centimetre tall icon which is said to have appeared miraculously to the Galla (later St Galla, for whom it was named), a Roman matron dedicated to helping the poor. This event is said to have taken place in 524, and the icon is said to have been carried in processions since 590, during the reign of Gregory the Great. According to scientific analysis the icon in fact is dated to the thirteenth century,

The church’s rebuilding, and the fusion of the two parishes, dates to a rebuilding following the end of the plague of 1656 which had swept pitilessly through the Kingdom of Naples, but had largely spared Rome. The objective was a grand new building to house the icon which was deemed to have had a miraculous role in this sweep of fortune.

Yesterday I glimpsed the news that although the mortality rate in Italy for March was up 49% compared to the average of Marches between 2015 and 2019 – and in Bergamo, the worst hit town in Lombardy, that rate is a gut-wrenching increase of 568% – Rome had in fact seen a reduction in deaths of over 9%. Some 300 people have so far died of COVID-19 in the Lazio Region (population 6 million). Undoubtedly the lockdown came in the nick of time for Rome, and in March this year far fewer people were being mown down while crossing the road, or falling off scaffolding at insecure workplaces, or catching influenza and the like.

Nevertheless, and even as a non-believer, I still dropped in to thank the Madonna of the Portico (a favourite incidentally of James Edward Stuart, or the Old Pretender as he was called when I was at school, who was devoted to the icon and spent much time here). Two people were praying before the icon so I didn’t go right in, just stood inside the door in that extraordinary space awash with gilded light, before ducking back out into the interplay of shadows and light, of wildflowers and blue skies of what appeared to be a perfect May day. Let’s hope the worst is over.